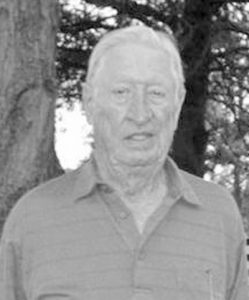 Quincie Blevins, 91, of Danville, passed from this Earth to his heavenly home on May 8, the anniversary of his birth.

He was preceded in death by his wife of 48 years, Bettye Jean Davenport Blevins; his parents, Arthur and Pearl Blevins; his brothers, Earl and Ken Blevins; and his sister, Beulah Blevins Vogt.

He is survived by his loving and devoted daughter, Tammy J. Blevins East, of Nicholasville and her husband, Martin; two granddaughters, Amanda East of Bowling Green, Kentucky and Lauren East-Hortin of Indianapolis, Indiana.

A 28-year member of the United States Navy, he was a proud and decorated veteran of the Korean War in which he served on the USS Herbert J. Thomas, retiring with the rank of Senior Chief Petty Officer.

He was born in Oneida, Tennessee and spent his early years on the Blevins Homestead in what is now the Big South Fork Recreation Area. He moved to Hubble in Garrard County with his parents as a young boy, worked the family farm, graduated Junction City High School in 1948 and graduated with a Bachelor of Science Degree in physics at Centre College, Class of 1958.

He retired from General Telephone in 1986 and spent his retirement years working various free lance jobs in the electronics communications industry.

His greatest joy in life was taking the pride in the accomplishments of his daughter, who worked tirelessly to make sure his last years were in comfort, and his grandchildren. They are left not to mourn his passing but to cherish his memory.

Visitation will be after 5 p.m., Tuesday, May 14, 2019 at Stith Funeral Home, Danville. The funeral service will be 1 p.m., Wednesday, May 15, 2019 at Stith Funeral Home. The Reverend Dwight Parker will handle the services. Burial will be at Camp Nelson National Cemetery with military honors provided by the Caswell-Saufley American Legion Post #18.