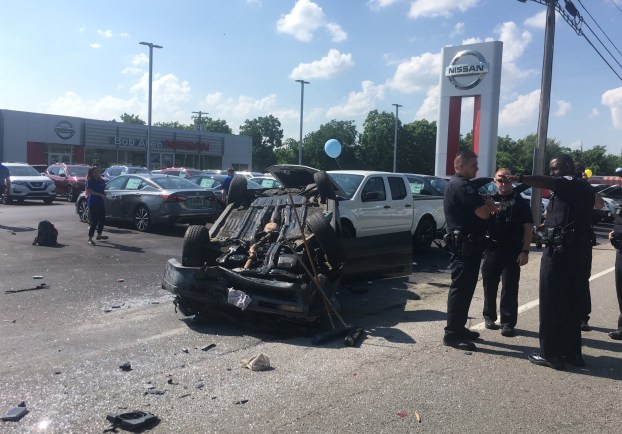 Danville police officers work at the scene of a rollover wreck on Maple Avenue Tuesday afternoon. (Photo by Robin Hart)

Two people were taken to the hospital and six new were vehicles damaged Tuesday afternoon as a result of the driver of a passenger car losing control and flipping the vehicle.

Danville Police responded around 4:30 p.m. near Bob Allen Motor Mall to reports of a rollover injury.

Russell Gibson, 46, of Salvisa, was traveling northbound on Maple Avenue in a 1992 Mitsubishi Diamante. Police say witnesses reported he lost control, hit a telephone pole and several new vehicles at the car lot, then rolled over onto its roof, “coming to a stop in the Nissan lot,” the release states. The impact broke the wooden utility pole in half.

Gibson and his passenger, Oney Wofford, 36, of Lancaster, were treated on the scene and transported by ambulance to Ephraim McDowell Regional Medical Center for further treatment. The extent of their injuries was unknown at press time.

The Danville Fire Department and Boyle County EMS also responded to assist. The incident is being investigated by Officers Chad Bartleson and Brandon Klein.

Capt. Chris Matano said alcohol may have been a factor in the crash. “We’re looking into that right now,” he said. 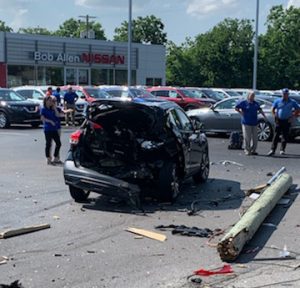 A handful of people attended Saturday’s Memorial Day Service to honor all veterans who died fighting for this country. Overlooking... read more