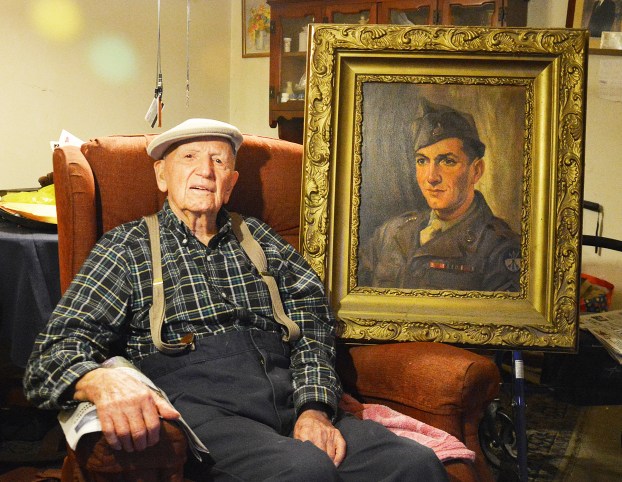 Ancil Shepherd, 100, was stationed at a prison in Germany for prisoners of war following the end of WWII. While there, a German cartoonist painted this portrat for him. (Photo by Robin Hart)

Centenarian was part of march to Berlin after D-Day

Ancil Shepherd didn’t fight on D-Day, but he marched as a member of the Army 3rd Infantry Regiment from France to Germany once the allies had gained solid footing toward the end of World War II. 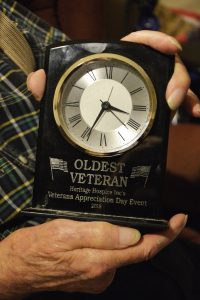 Shepherd is 100, and said he’ll be 101 on Aug. 8. His hearing has faded but he’s clear on several aspects of his involvement in the war.

At age 17, Shepherd was a member of the National Guard. When he entered Eastern Kentucky University in 1938, he joined the ROTC program there.

By the time he was called to active duty overseas, “… Americans already had everything shaped up when I got over there,” Shepherd said.

The 3rd Infantry’s soldiers were nicknamed “dog faces” Shepherd said. And they were the first American infantry to reach Berlin, “But the Russians said to back up,” Shepherd recalled.

President Roosevelt had met with the Russian leaders and agreed that the U.S. would let the Russians have Berlin, Shepherd said. “They stopped our advance to Berlin. The Russians reminded us that they were going first.”

Soon afterward, “The Germans, they just started giving up to us, rather than have the Russians take them,” Shepherd said.

His regiment was in charge of searching, counting and classifying the prisoners before taking them “to a more permanent prison.”

“Did I shoot a lot?” Shepherd asked, then answered, “I didn’t waste no ammunition.”

In Germany after the war had ended, Shepherd was in charge of a platoon of U.S. soldiers who were looking after German prisoners at the largest prison camp (the name of which he can’t recall) assigned to repair watches and other things, he said.

In his group there was a German cartoonist who painted portraits of some of the American officers, Shepherd said. And he painted one of Shepherd, which he was able to bring back home when he was discharged.

Shepherd said when the 82nd Airborne Division left Berlin, his regiment took over. The 82nd got a ticker tape parade when they arrived in New York, Shepherd said.

“When I left Berlin, I just come home.”

On Wednesday, June 7, the day after allied forces invaded Normandy, better known as D-Day, the headline across the Danville... read more