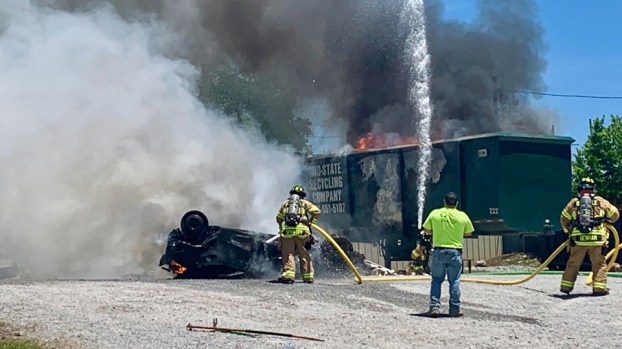 Crews battled a fire in a fully engulfed trailer Friday afternoon, after witnesses reported hearing an explosion. The fire was at Mid-State Recycling Company. (Photo courtesy of Danville Fire Department)

The Danville Fire Department responded to a fire that broke out in a trailer at Mid-State Recycling Co. Friday afternoon, on Old Stanford Road.

The call came in sometime before 2 p.m., and after 6 p.m., Battalion Chief Gabe Heatherly said firefighters were just getting back into the house and cleaned up from the call.

Heatherly said witnesses on the scene said they heard a small explosion inside of the recycling trailer. When they came out to check on the situation, part of the material inside the trailer was on fire, Heatherly said.

Stanford Road had to be closed, as well as the Gose Pike intersection, because crews had to pull the fire hose across the street.

Heatherly said they were able to use the ladder truck to extend out from above the trailer, and battle the fire from above. Crews were able to get the fire extinguished in around 45 minutes, he said, but further clean-up and work had to be done on the scene. No one was injured.

The cause of the fire is still under investigation, Heatherly said, but nothing seems suspicious.