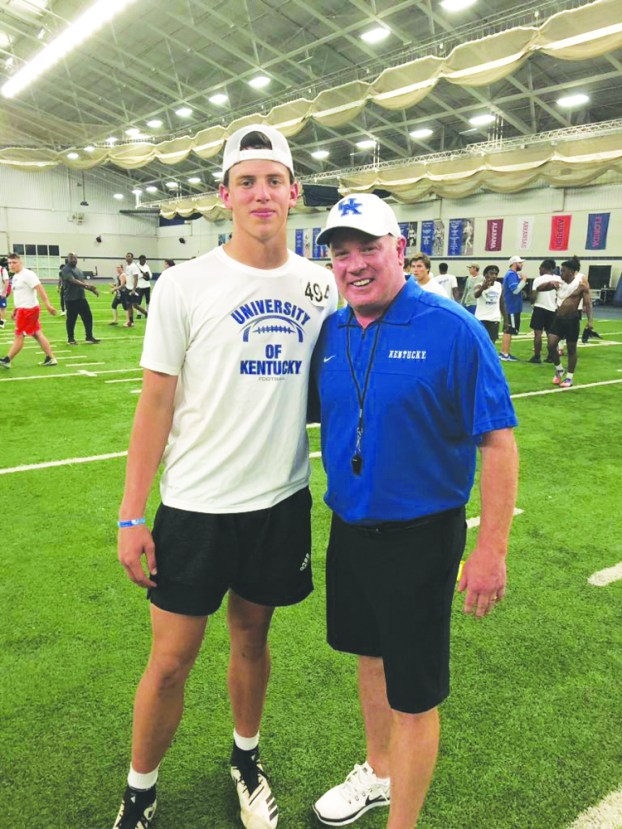 One of Somerset coach Robbie Lucas’ high school football teammates at Lincoln County was Kevin Sheron and when Lucas went into coaching, Sheron always talked about how nice it might be if his son could play for his former high school teammate.

A few years ago when Sheron, who works for a pharmaceutical company, had a chance to move he picked Somerset and put his son, Kaiya, into the Somerset school system. Fast forward a few years and Kaiya is now a 6-4, 210-pound junior quarterback who recently got a scholarship offer from the University of Kentucky with plenty more offers expected to come this summer.

“It all worked out well and Kaiya really fits in well here,” said Lucas. “Kevin and I always talked about something like this, and for some reason it just happened.”

After injuring his knee as a freshman, Sheron led Somerset to the Class AA semifinals in 2018. He threw for 1,846 yards and 13 scores and ran for another 505 yards and seven touchdowns.

Sheron got his UK offer after attending a camp there but the UK coaches had already been to Somerset and had film of Sheron they obviously liked.

“He has a good touch on the ball and can put it in tight spaces,” Lucas said. “He is really accurate. His ball placement and velocity are what colleges are looking for. He can throw the 18- to 20-yard out very well.”

Sheron had visited West Virginia and Toledo previously but Kentucky was his first Power-5 scholarship offer. Louisville, Purdue, Vanderbilt and Western Kentucky have all also showed interest in Sheron.

“He is not a speedster but he is deceptively quick,” Lucas said. “Being 6-4, he has a long stride that might make him look slower than he is.”

He started on the basketball team where he averaged 9.5 points and 8.1 rebounds per game. Lucas said even though Sheron doesn’t play baseball that “he is really good” and he has encouraged him to play.

“We are going to do what the game dictates and he gets that,” Lucas said. “We have three of our starting linemen back along with three backs. We will run a lot of read option with him. That helped us last year.

“He’s a very smart kid and sees the field well. He’s not just a passer even though they (recruiting analysts) are listing him that way. He’s good in the run game. He actually thinks he is bigger than what he is. But he can run and throw it both and do them both very well.”

Lucas said Sheron doesn’t show a lot of emotion but was “excited” by the Kentucky offer.

“He has worked hard. He’s very positive and does a lot of good things. He’s very quiet. He’s not going to be the guy yelling and screaming on the field. He’s more calculated,” Lucas said.

Lucas says not to expect any quick college decision from Sheron.

“He needs to sit back and wait and see what all happens,” Lucas said. “I expect a lot more offers to come. I want him to have options and choices but also realize these are just promises right now. None of this changes my expectations of him one bit.

“We are going to try and play for a state title. I do worry that when kids get UK offers that people will see them play two or three minutes and decide they are not good enough to play at UK. But there is no pressure on him. We are happy he got the offer but he’s just a small part of our team and he gets that.”

By LARRY VAUGHT Contributing Writer   Growing up in Paintsville, Kash Daniel was a three-sport standout and now has become... read more