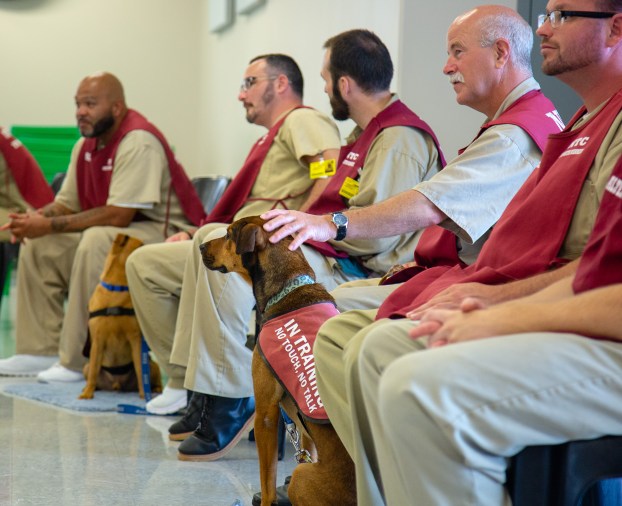 After a decade in operation, Mutts with Manners had its anniversary celebration Wednesday at Northpoint Training Center. The event was also used to make an announcement — the group and prison will now expand the program to 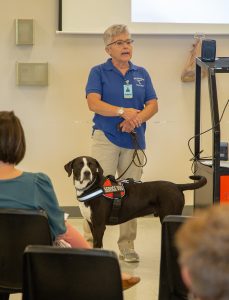 Cheri Carbone, who heads up Mutts with Manners, explains the program to visitors Wednesday at Northpoint Training Facility, with her own service dog, Zander. (Photo by Ben Kleppinger)

Cheri Carbone, who heads up Mutts with Manners, said it began due to calls she got from both the Danville-Boyle County Humane Society and the prison. Both wanted to start an inmate and dog program in the area, and wanted Carbone to lead it due to her dog-training expertise.

She came up with the name, and “it was started from the ground floor up,” Carbone said. There had been some other dog training programs in correctional facilities, but the closest she knew of, at the time, was Blackburn Correctional Complex in Lexington.

Mutts with Manners began in June of 2009, based on the premise that housing dogs with assigned inmates dedicated to training and socializing them will only help with adoption numbers.

“The applications you get in (for dog adoption at humane societies) are almost 85-90% young families who have little kids and they want a puppy — bad idea,” Carbone said. Puppies chase and chew and bite, so with kids, that means even more upheaval, she said.

“If you have an adolescent dog or a dog with some training, they’ve learned how to behave. You don’t have to worry about housebreaking, they understand commands,” she said.

Carbone, a volunteer, credits a lot of the group’s success to other volunteers — many who stepped forward to help her after taking a free dog-training class she offers once a month with the Humane Society.

“John Turner, Charlotta Norby and Dan Fulks … They’re all long-time volunteers” and have been instrumental in the program, she said, and included Mary Broyles as “a tremendous help.”

Carbone also credits Warden Brad Adams for his support of the program, and for wanting to add the service dog initiative now. She said “things have really changed for us at the prison” since Adams came on in 2018. 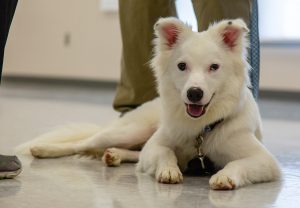 Gandalf hangs out at the feet of an inmate at Northpoint Wednesday. He’s a Mutts with Manners dog, being trained by an inmate, is deaf and “very smart,” Cheri Carbone said (Photo by Ben Kleppinger)

“Oh, I absolutely believe in it,” Adams said about Mutts with Manners. There are five inmates with five dogs in the program, which are housed separately.

“The incident rates in that area compared to the other areas — significantly lower. They take great pride in taking care of the dogs — they show them off,” Adams said.

Warden Adams says the success of the program is precisely the reason they want to add five more slots for dogs being trained for veterans. The dogs will be housed in the veteran’s area of the prison.

“We call it the veterans dorm,” Adams said. “We also have certain programs — moral reconation therapy, behavioral and clinical, where we address PTSD and other issues.”

He said when he was deputy warden under Don Bottoms, he heard from inmates of the veterans dorm that they wanted to start a program of their own.

“When I came back as warden, we’d talked about it,” Adams said, and credits Dep. Warden Shea Carlson, who he says “has been on top of everything” with the dog program, as well as the volunteers who work with her.

“Dep. Warden Carlson, Jessica Payton, Kay Johnson, Christina Coleman and all of the unit staff and all of the volunteers have made this program successful — and the future expansion of the program possible,” Adams said. He calls this group of people “boots on the ground,” and said that as with all prison programs, “more than one life is touched in a very positive way. However, with this program, multiple lives are touched, including a precious dog who otherwise may have never had a family.”

Adams said the prison has already ordered new crates for the new service dogs’ trainees, will train the inmates for up to three weeks and then they begin receiving the dogs.

Stepping in where government should be

Carbone hasn’t come up with a name for the veteran service dog program, but is working on it. She’s been working through a group in Tennessee that only trains dogs for veterans, and does it for free.

“Working Dogs for Vets is growing really quickly right now,” Carbone said, since the government isn’t doing its job of helping veterans in need or covering needed medical treatments. She said when she encounters vets in need, “I feel guilty for what I have and they don’t, and for what they’ve done for our country.” Some are just young kids who end up spending the rest of their lives disabled or living with debilitating psychological disorders, she said.

“Our country should be ashamed of themselves for having veterans go through what they are,” Carbone said. 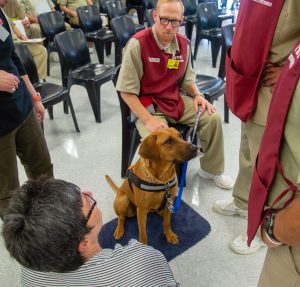 After the service dogs for veterans program gets underway, Carbone will be looking for homes to foster them and keep up their training until they are matched with an owner.

For the $150 adoption fee for Mutts with Manners dogs, Carbone says people are getting quite a savings.

“You’re not going to get that anywhere else. That’s an extremely good cost — the time and money you’d spend in obedience school? Way more than $150,” she said.

Plus, the fact the dog has already lived with someone who can provide additional screening information about their behavior is priceless. “They’ll know if it’s a good idea to put them with little kids or not, what situations this dog will thrive best in … “

Carbone said whether you’re a veteran dealing with PTSD, or a young family looking for its first dog — there’s one piece of wisdom she tries to impart on everyone she meets.

To find out more about Mutts with Manners, to volunteer or become a foster home for a program dog, contact Carbone at (859) 583-1774 or cherjoe1@yahoo.com.

Life skills for adults — it’s part of what Alethea Price teaches for a living. As an agent for family... read more