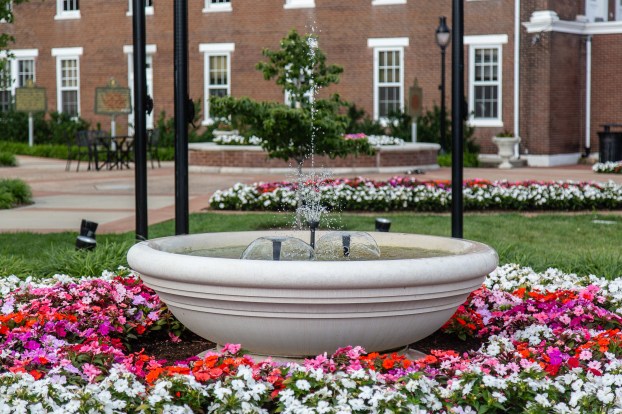 The fountain in Weisiger Park was criticized by Mayor Mike Perros as being an "expensive ice-maker" and a "glorified planter." (Photo by Ben Kleppinger)

A group of around 15 citizens have signed a petition and raised money in an effort to get Danville to replace the fountain in Weisiger Park, according to City Manager Ron Scott.

Scott said this week he had been shown the petition and been told the group had raised $2,200 by Janet Hamner, a local business owner. 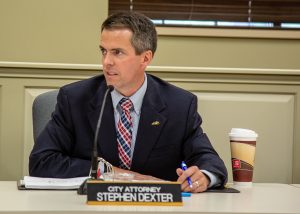 Danville City Attorney Stephen Dexter told city commissioners Monday he believes design firm Brandstetter Carroll has failed to deliver the fountain it promised for Weisiger Park and “they have a liability of making that right in some form or fashion.” (Photo by Ben Kleppinger)

The suggested replacement fountain features water “flowing out of the necks of swans,” Scott said. The group wants the fountain swap because, like many in Danville, they think the current fountain is underwhelming.

“We’ve had difficulties — it’s no secret to anyone that our existing fountain I would say is not optimal,” Scott said.

The Lexington fountain’s price tag is $6,000 and the total cost to acquire and install it would likely fall between $20,000 and $30,000, he said. The existing fountain might find a new home at the city’s water treatment plant or somewhere smaller in scale, where it might look more appropriate.

Scott noted he was simply informing commissioners about the petition and not suggesting any course of action at this time.

Elected officials took no action on the issue Monday — the petition apparently has not been formally presented to the city yet — but they spoke critically of the existing fountain and the company that handled the park renovation, Brandstetter Carroll.

“We were never satisfied with that thing from the beginning,” Commissioner Rick Serres said, and proceeded to ask Municipal Engineer Earl Coffey a question: “… We didn’t feel like that’s what Brandstetter Carroll had presented to us. So how did we end up leaving that, in terms of — do they owe us?”

“They’ve been paid fully,” Coffey said. “They compensated the city by purchasing an additional pump in an effort to improve what was there. I really can’t judge necessarily to what extent the work they did is fair or not.”

The Weisiger Park renovation was dedicated in 2017 after numerous delays and revised completion dates. Work continued on the park after that point, but at the dedication it was announced the total cost was $594,000. The park also has a pergola and seating area; new pavement; and a raised stage area with a “water wall” feature — which has also been subject to complaints that it has minimal visual impact.

Coffey said Monday he thinks it’s a “two-way street” when it comes to why the fountain failed so badly to live up to expectations. He noted Brandstetter Carroll spent extra effort outside of its contract to try to improve the fountain and whether or not they met their contractual obligations is up for “interpretation.”

“My interpretation is we got something that never worked right from the get-go,” Mayor Mike Perros responded.

“The city engaged them … to produce a product that has yet to be delivered,” Dexter said. “… They have a liability of making that right in some form or fashion.”

Dexter said he believed the fountain issue had been left to be decided after the park was completely finished to see “if it still had the same effect when the total park was finished.”

“They asked for patience, which was granted, but to me the product still hasn’t been delivered,” he said. “… I would think that the city needs to be made whole in the production of a workable fountain. And I would say that the work the city employees have done has been laudable, but in essence, the creativity of someone in the Public Works Department with making an ice-maker to rig an engineered fountain to the tune that the city paid for that is wholly inadequate and insufficient.”

Perros doubted the Weisiger fountain would be of value anywhere else, let alone where it is now.

“It will never be a workable fountain to where water can come in and circulate and go out and back in,” Perros said. “To me, it’s a glorified planter at this point.”

Serres pointed out that the community wants that high-traffic corner of Fourth and Main streets to look good so badly that some have now “responded with their checkbook.”

“It seems like we ought to have a little bit of a conversation with Brandstetter Carroll. We’ve done a lot of work with them and they’ve done great work for us,” Serres said. “And I think they would like to continue to work for the City of Danville, naturally. So I think a conversation with them could be part of this scenario moving forward, see what they could do to help out.”

Police: Danville toddler shot himself in the foot

A 2-year-old child accidentally shot himself in the foot after he found an unsecured handgun Tuesday night at a family... read more