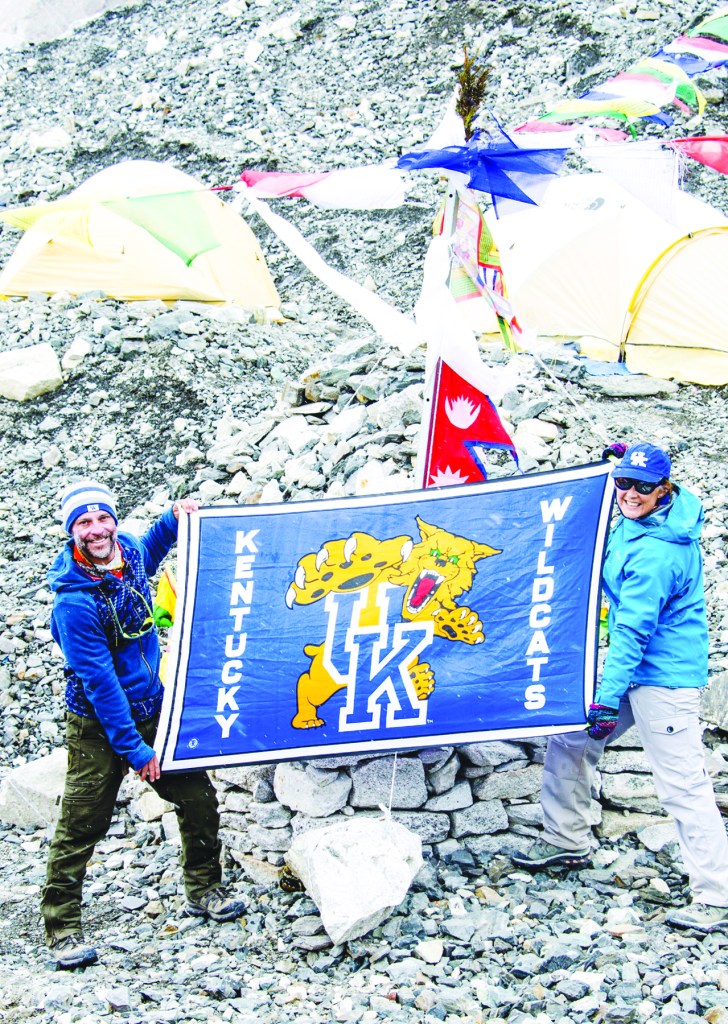 Chip, left, and Krystal Dittus made sure everyone at the Mt. Everest base camp knew they were Kentucky fans. (Photo submitted)

Kentucky natives Krystal and Chip Dittus often plan vacations to watch Kentucky basketball postseason games even though they now live in Key West, Fla. This year, however, the two UK fans did something a little different for their special trip — they went to Nepal and hiked to the Mt. Everest base camp in May.

It was no surprise that the trip included UK gear to show their loyalty to the Cats.

“That was planned from the beginning and we even bought a new baseball cap for the trip. One of our porters, the amazing people who climb the mountain carrying approximately 100 pounds — some of which was our gear — liked the UK hat so we gave it to him,” Krystal Dittus said. “Now UK is being repped on the trail all the time by a local.”

Doing this hike meant the couple decided not to attend the Southeastern Conference Basketball Tournament in Nashville, an event they love to watch. That made me wonder why they decided to do a hike to Mt. Everest base camp instead.

“We had climbed Ben Nevis, the highest mountain in the United Kingdom, which is at an altitude of 5,000 feet in Scotland. After that we started watching shows on TV about Mt. Everest and thought that would be neat to go there,” Krystal Dittus said. “We weren’t sure if it was possible to hike to the base camp so we started investigating. Turns out you can, so we decided to do it.

“It took about six months of planning, which was mostly deciding on which outfitter to use. We were lucky in that Chip’s cousin teaches in an overseas school in Bangkok and she recommended the guide we used based on her friend using him on their trip.”

With all the news recently about 11 people dying trying to make the climb to the top of Mt. Everest, I thought “only” getting to base camp still seemed like a huge challenge.

“We met our guide in Kathmandu and from there we flew to the town of Lukla which is at 9,000 feet. Then you start hiking. We would walk about four to six hours a day and then spend the night in tea houses, which are little hotels on the trail,” she said. “They are not fancy and usually consist of a common room that serves as the dining hall and then a room with two beds.

“Sometimes you get your own bathroom but more often than not you share a common restroom and hope its inside and a sit down toilet … in Nepal, sometimes they are squatting toilets.

“Twice we stayed in the same town for multiple days to get used to the altitude. That is the biggest concern with the trip, avoiding altitude sickness. If you develop that the only cure is to go back down to a lower elevation which ends the journey.”

Krystal Dittus said one of the best parts of the climb for her was getting to eat lunch at base camp with some Sherpas, one of the ethnic groups native to the mountainous regions of Nepal, who were going to the top of Mt. Everest as a charity event to raise money for widows who lost their husbands on Everest.

“Generally hikers like us only have a small area at base camp to visit as they don’t want hikers running all over and getting in the way of the climbers. However, our guide is friends with the group who we ate lunch with so were able to proceed through the checkpoint and had free reign to roam around camp and were also able to get on the Khumbu Glacier,” Krystal Dittus said.

However, the trip “only” to base camp was not easy for these two UK fans.

The final day of the hike was at an elevation of 18,000 feet where one has only about 50 percent of the normal oxygen level.

“It was like walking through knee high mud and every step was sheer will power as we hiked about eight hours total that day. It was exhausting and exhilarating at the same time but worth it to make our goal,” she said. “We never felt scared or in danger but some of the terrain was treacherous with big rocks and uneven footing, so you had to be very careful not to fall or sprain an ankle.”

Obviously weather in Key West where the couple lives is far different than what they faced at Mt. Everest. They both scuba dive but to prepare for this they did cardio workouts or hikes while wearing masks that simulated altitude starting at 3,000 feet and working their way up.

“I don’t know if it actually prepared us but we made it so I guess it helped some,” she said.

She also said the weather stayed nice until near the end of their journey when it was cold during the day as well as at night.

“We just layered clothing and and the guide provided warm sleeping bags and fleece liners for sleeping,” she said.

Friends are used to the couple being a little different. During UK games, Krystal jokes that neighbors have learned not to pay attention to the screams and/or noises depending on how the Cats are doing.

“Reactions (to going on the trip) varied from ‘why would you do this,’ to ‘please don’t die’ or ‘that is so amazing,’” she said before adding everyone also encouraged them to take and share pictures, which they did.

“Chip would definitely do it again and is planning to go to Kilimanjaro, the highest mountain in Africa,” she said.  “I am glad I did it but would not do it again.”

After all, how many SEC Tournaments can a die-hard Kentucky fan miss even if it is for an adventure like this.