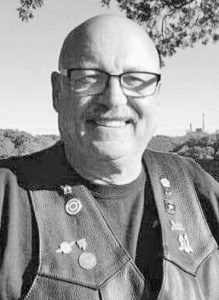 James W. Jackson, 66, died Saturday, July 6, 2019. He was born in Danville on November 8, 1952 to the late Grant Robinson and Juanita Key Jackson. James served in the United States Navy and attended United Methodist Church in Harrodsburg. He was employed at Kentucky Utilities in the Control Plant. James loved his motorcycles, guns and his grandchildren.

In addition to his parents, he is predeceased by a brother, Robert Jackson.

He is survived by his companion, Linda Rowland of Harrodsburg; a son, James Jackson, Jr. of Louisville; a daughter, Rebekah Jackson of Richmond; three grandchildren, Jayden Jackson, Chloe Jackson and Sophie Jackson.

Memorial donations are suggested to Coach Plummer 5K Run/Walk. The online guestbook is available at www.stithcares.com.