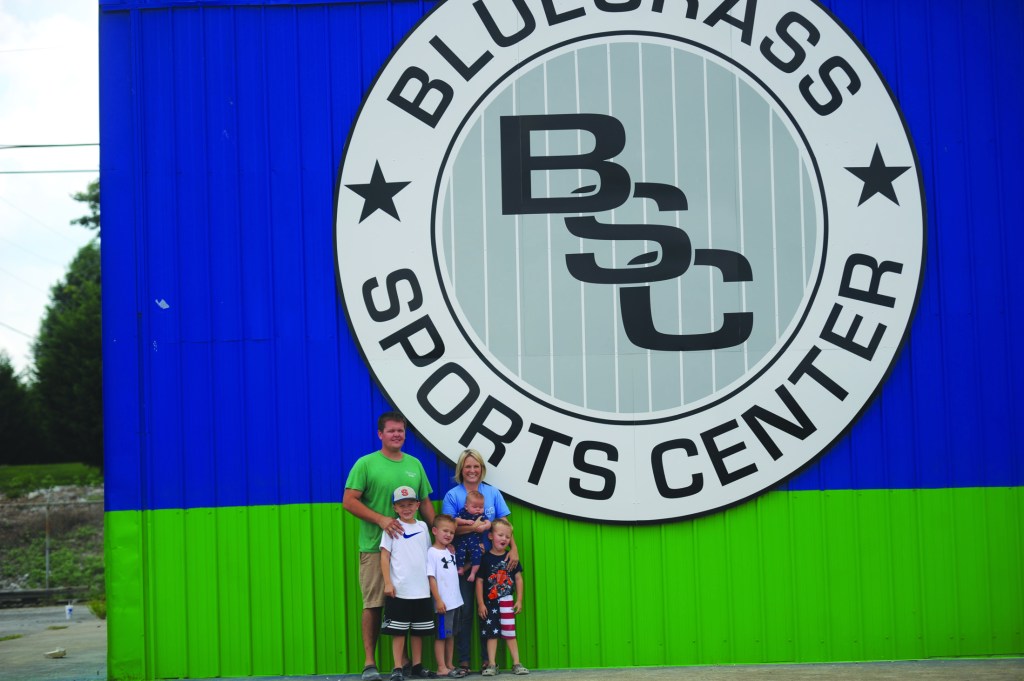 Joe and Ashley Wesley wanted to create a space where parents can take their kids to play sports after their own children started getting involved in athletics. (Photo Derek Brightwell)

Off of Perryville Road and the Danville Bypass sits a large, 16,000 square foot building painted blue and green. What’s inside may not be much right now, but it represents a three year dream for Joe and Ashley Wesley.

“Ashley had the idea that she wanted, the area is in need of a place for kids to play sports,” Joe said. “We’ve got four boys now, three of them are in sports. Finding a place to practice or play it’s basically, unless you’re involved in the school somehow, you’ve got no real options.”

“We wanted to have a place where dads and moms and coaches can come here and play and train their kids and help them get better and learn life lessons in the process. Which is what sports are all about,” Ashley added.

The couple have been working on building Bluegrass Sports Center, doing most of the interior work themselves. Joe said that it has been a “labor of love”, and said that it hasn’t always been easy in getting here.

“It’s been tough, it’s had its ups and downs,” he said. “We thought we bought this property a year and a half ago. Just finding the right spot, right location.”

Right now, the building is mostly empty, as they finish up getting it ready for its planned September opening. Once open, it will have two full court basketball courts operational from December through February. The rest of the year, one of the courts will be covered with turf to field other sports.

“We’ll be able to do baseball, football, lacrosse, soccer, basically any field sport you wanna play, we got it,” Joe said. “We’ll also be able to do volleyball on the basketball courts.”

There will also be two turf batting cages in the second building. Those cages will include what the Wesleys believe will be the main attraction to Bluegrass Sports Center.

“We just ordered a product called HitTrax. It basically works with batting as well as pitching and catching. You can use it as a training aide or you can do home run derbies. It’s pretty cool; it uses all kinds of metrics,” Joe said. “I can compete against my eight year old son and through its algorithm, it balances it out so it’s a fair match-up. There’s actually leagues all over the country and you can have a team and compete with another team in California or all over the world.”

“The gaming module is what I’m excited about. Teams can bring their whole team here and compete against each other,” Ashley said. “It’s like a video game.”

“I’m a very competitive person. I was involved in basketball, softball, I kind of did everything. My mom and dad encouraged me to do everything,” Ashley said. “They took me to all the places. Even though that’s hard to do as a mother of four, we still do it to try to keep them involved and keep them active.” 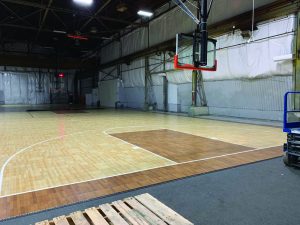 Despite renovations still being done to the building, the Wesleys have already purchased the basketball court (seen here) and all of the turf for the Bluegrass Sports Center. (Photo submitted)

Joe was also a multi-sport athlete growing up, even competing in motocross up until he had children.

This isn’t the first foray into providing a place for kids in the community to get out and have fun.

“We started with Party on Air, doing fun things for kids in the community because there’s not very many choices for them,” Ashley said. “If they’re not involved in anything, they tend to go the wrong route. As far as our kids, they’re involved in everything. I think they’re learning lessons that are important in life.”

As BSC grows, they want to expand the opportunities they give the kids in the community.

“We want to be a host for tournaments and leagues, we don’t have any plans to do that as of now,” Joe said. “We’ve been contacted by different people and different leagues as a spot to do lessons for baseball, basketball. We can give you an opportunity and spot to do that.

“We’re shooting for January to try to do some after school programs. We want to provide a safe place where they could do their homework but also have staff here that will practice basketball drills or soccer drills. That’s still a work in progress.”

There is still a lot of work to be done to get the building ready for opening day. For updates on the progress, you can check out Bluegrass Sports Center on Facebook.