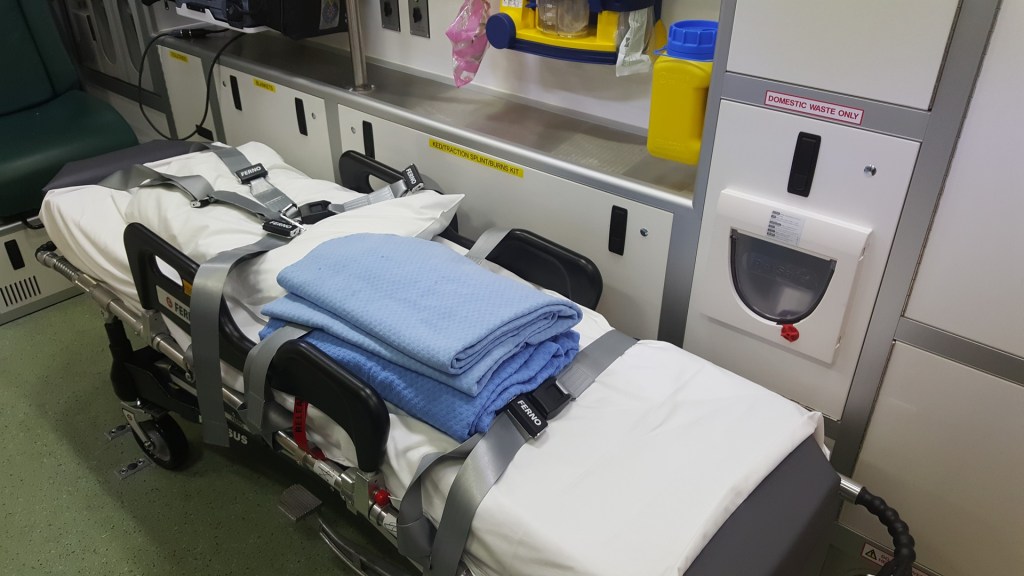 But it didn’t happen until after a lengthy discussion, during which Magistrate Jason Cullen strongly cautioned the court and Rogers about giving the $4 pay raise all at once.

Rogers told the court the EMS Committee, which met just before the fiscal court meeting, decided to go ahead with the proposed raises, which will bring part-time EMTs from $8 per hour to $12, and part-time paramedics from $11 per hour to $15, effective July 18.

“So, they’re automatically going to get a four-dollar bump?” Cullen asked.

Magistrate Phil Sammons said he and Magistrate John Caywood, both EMS Committee members, think the move is an emergency need.

“Judge, we — the committee — we don’t like to make raises without looking at every department, but we feel like, after he explained everything about how hard it is and losing so many employees, that this is an emergency. This is a medical field,” Sammons said.

“And I just didn’t feel like giving that kind of raise. But after he explained it, and really — John and I digested  this pretty well, we felt like it was an emergency that we go ahead. And I think Mary (Conley, treasurer) has agreed with us, that the money’s in the budget,” Sammons said. He said the move was needed in order to “give our citizens the proper care,” and that EMS is “supposed to have a paramedic on every run.”

Sammons said he learned how EMS constantly competes with “the hospital and paramedics — they’re paying them more than we’ll ever be able to afford to pay them … I make the motion to approve.”

Caywood seconded the motion, and said the whole health care industry is going through a change, and “the competition for training people is getting incredible.” He just realized during the committee meeting that Boyle EMS is competing with the ER, “where a lot of hiring is going on for the hospital, and we also have the air evac industry as competition … The dollars are changing.”

Caywood said Boyle is known for having “a very good EMS department, and this county should be very proud of it. But we cannot maintain this level and keep the bar high if we don’t keep up with the marketplace. We can ignore it, and the quality of service will go down to our citizens, and I don’t think anyone in this room wants that.” He said when EMTs or paramedics are trained, you’re looking at a two-and-a-half year investment. “And you lose one, that’s how much training you’ve lost,” he said.

Magistrate Jamey Gay said budget-wise, the raise “becomes a wash” because it will save the county over-time pay.

Cullen reminded Rogers about conversations the two of them have had, and hoped those discussions “are somewhere in your mindset. No matter what, we’re going to be chasing somebody. That’s the reality.”

Cullen said, “We raise $4, the next county over will raise it $2, then where are we at? We’re in a constant game of trying to chase people. We have to understand that Boyle County has a nicer quality of life than most of the surrounding counties. So there’s a benefit of working here — at $8, no.”

He suggested “bringing them in at, say, $10. Then after six months, incrementally raise them up when we know that they’re committed, have ties here, that’s where I’d go with this. I wouldn’t just drop $4 raises on people. That will set a precedent for your full-time people as well, that they’re like ‘well, these other areas are paying full-time staff more, so we want a raise, too, you gave a part-time raise.’ I’m telling you — it’s a dangerous game you’re getting into.”

Cullen said he “loves the quality of care” EMS provides and appreciates the committee and all the information shared, “but I really would recommend getting some sort of 6-month drop-in for that $4 raise, if you’re going to do it.”

“For new employees?” Rogers asked. “The employees I’m trying to encourage to work more are part-time employees that have …”

“How many do you have?” Cullen interjected. “Because the whole mindset of this is that you can’t attract employees … What you’re telling me is that you have employees.”

Rogers said not right now. “We just lost five paramedics because they’re not working enough hours. So, this is the first time in a long time we had a truck without a paramedic. If there’s three runs, there’s a chance someone’s not getting a paramedic.”

“Not enough hours — explain that to me,” Cullen said. Rogers said they haven’t been “working enough,” and some “with no hours since January.”

Cullen asked, “So, they’re electing not to work?”

“We can’t compel them to work,” Rogers said.

Simply put, Rogers said they can work other places for more money. After the meeting, he said paramedics’ shifts are like firefighters — on for 24 hours and off for 48, so they pick up jobs at other agencies on days off to make up the difference. Part-timers will schedule their time at the other agencies that pay more, Rogers said, and give Boyle the time that’s left over.

Rogers told the court they’ve recently made runs without paramedics.

“For example, over the weekend, the hospital called and had a patient that needed to go to Lexington. We didn’t have a paramedic, so we had to send a nurse — first time we’ve had to do that in a long time. It’s not the model we want to run because it’s not ideal.”

Caywood said if Boyle isn’t “market price, you’re never going to get them to begin with, right? They’re going to go somewhere they can get it. You’ll never have a shot at it.”

“What we’re wanting to do is entice paramedics to come and let the service and the fiscal court sell itself. To say ‘hey, this is where I want to work …’” Rogers said. He said the raises are both a recruitment and retention tool in one move.

Magistrate Tom Ellis asked if some of the personnel who left may come back, after the raises are enacted. Rogers said maybe.

“Personally, if they left, I wouldn’t bring them back. I’d look for new people,” Cullen said.

Rogers said currently, a part-time person can go to Madison County and work as an EMT for $12.75 an hour. “That’s how far behind we are on part-time pay,” he said.

Cullen asked Rogers, “So there’s no guarantee that you’ll still be able to retain those people?”

“I feel confident this will fix our issues with our part-time staff,” Rogers said.

The court passed the motion 5-1, with Cullen voting against.

After the meeting, Rogers said he understood the peppering of questions from Cullen. “They make tough decisions, and I understand it. But we usually get what we need from the court,” he said. “I’m super-thankful for them. They give us all the equipment we need and the support of the court.”

Rogers said Boyle EMS “couldn’t do what we do every day” without that support.