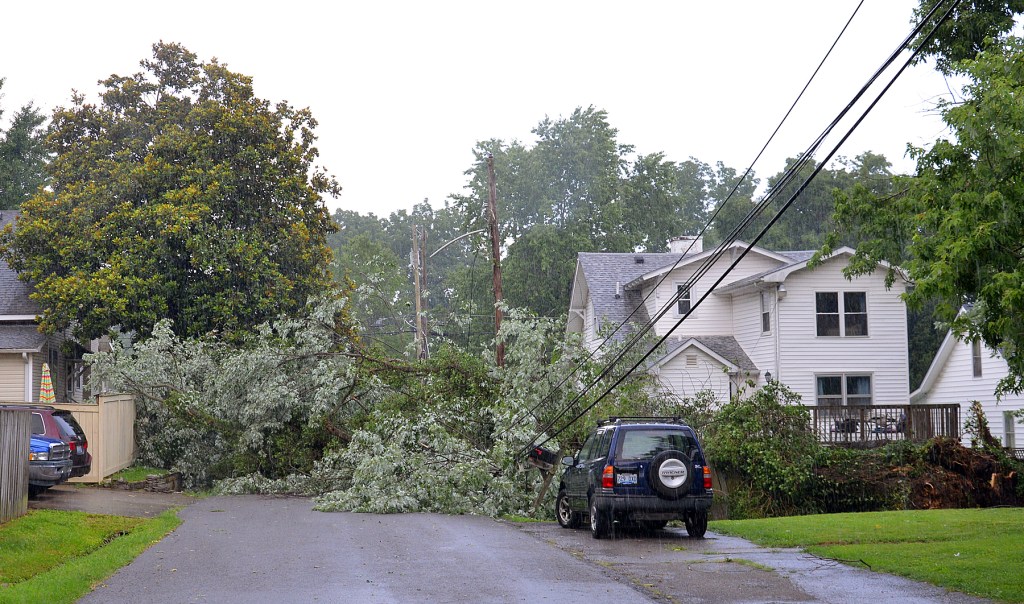 A large tree in the backyard of a home at the corner of Bruce Court and East Main Street fell Thursdayd afternoon. The tall tree looked as if it had been pushed over at the base of its trunk and fell across Bruce Court. (Photo by Robin Hart)

On Friday, public works crews were still working to clean up trees and debris left behind following a brief but intense storm that swept through Danville late Thursday afternoon. 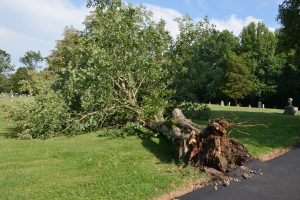 A tree in Hilldale Cemetery was knocked down at ground level, causing a portion of the blacktop to buckle. Right after the storm Thursday, the sun popped out. (Photo by Robin Hart)

Director of the City of Danville Public Works Department Rick Henry said seven people worked from when the storm ended about 5 p.m. Thursday until nearly 2 a.m. Friday, clearing roads and trees from properties in the area.

By 8 a.m. Friday, everyone was back on the job at Jackson and Batewood parks, clearing fallen trees and limbs, and traveling back around to Bruce Court, Aspen Lane, Baughman Avenue, Gose Pike and Duncan Hill to clear more debris from the edges of the roads. The street sweeper was also sent out to finish cleaning the roads.

“They have a heavy workload as it is now,” Henry said. “Now they’re working really hard and extra hours” after the storm, he added.

Director of Boyle County Emergency Management Mike Wilder said many trees were down, mostly in the southeastern area of Danville city limits. The bulk of the damage was contained in about a 2.5- to 3-mile radius. “It wasn’t all over the county,” Wilder said.

He speculated straight-line winds were to blame for the damage that was mostly in the area of Baughman Avenue, Gose Pike, Stanford Road and Duncan Hill. The large trees that were toppled over from the roots was “good evidence” that winds could have reached 60 miles per hour, Wilder said.

On David Avenue, off of Stanford Road, a tree fell on an above-ground pipeline, causing a small gas leak, Wilder said. Trees also fell on homes, across roads and on two vehicles.

On Toombs Court, a tree crashed down onto a street light, causing it to crumple to the ground and nearly every trash can in the Batewood Homes community was pushed over on its side.

Wilder said no flash flooding was reported and no one was injured during the brief storm.

Danville Fire Department Deputy Chief Tim Brumfield said they received and assisted with 12 storm-related calls within a 2-hour time frame. “We were stretched pretty thin.” Thankfully, there were no hazardous conditions and no immediate dangers, Brumfield said.

Assistant Police Chief Glenn Doan said his department was also kept busy during the same time, assisting the DFD and Kentucky Utilities by blocking roadways where trees and live utilities lines were being removed from the roads.

“It was a busy few hours,” Doan said.

“It was a typical, garden-variety thunderstorm with torrential rain,” Wilder said. “We don’t see this often with this many trees down.”