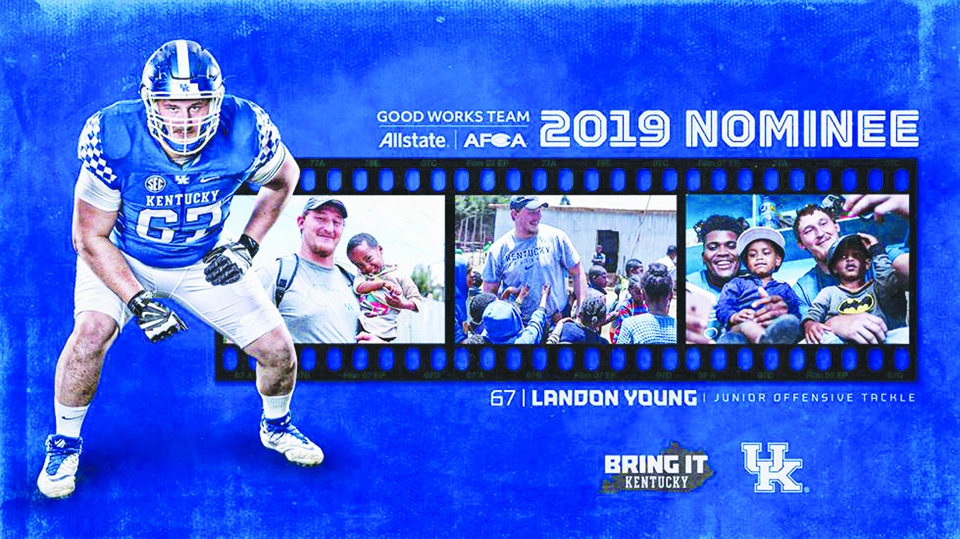 LEXINGTON – University of Kentucky junior offensive tackle is one of 137 nominees for the 2019 Allstate AFCA (American Football Coaches Association) Good Works Team®, an annual award given to college football players for the impact they make off the field.

Established in 1992, the Allstate AFCA Good Works Team® continues to be one of the most coveted community service awards in college football. From the 137 nominees, the final roster of 23 award recipients will be announced in September, bringing together 11 players from the NCAA Football Bowl Subdivision; 11 players from the NCAA Football Championship Subdivision, Divisions II, III and the National Association of Intercollegiate Athletics (NAIA); and one honorary head coach. To be considered for a spot on the Allstate AFCA Good Works Team®, each player must be actively involved with a charitable organization or service group while maintaining a strong academic standing.

The final 22-member team and honorary coach is selected by a voting panel consisting of former Allstate AFCA Good Works Team® members and prominent media members who look for both their dedication to giving back and the embodiment of true leadership on and off the football field.

After the final team members are announced on September 12, 2019, fans can vote for this year’s Allstate AFCA Good Works Team® captain through the official page on ESPN.com. Fans are also encouraged to join in the conversation by searching and using #GoodWorksTeam on their social media channels throughout the season.

Since being founded in 1992, UK has had 14 players selected to the Good Works Team, most recently Courtney Love in 2017.