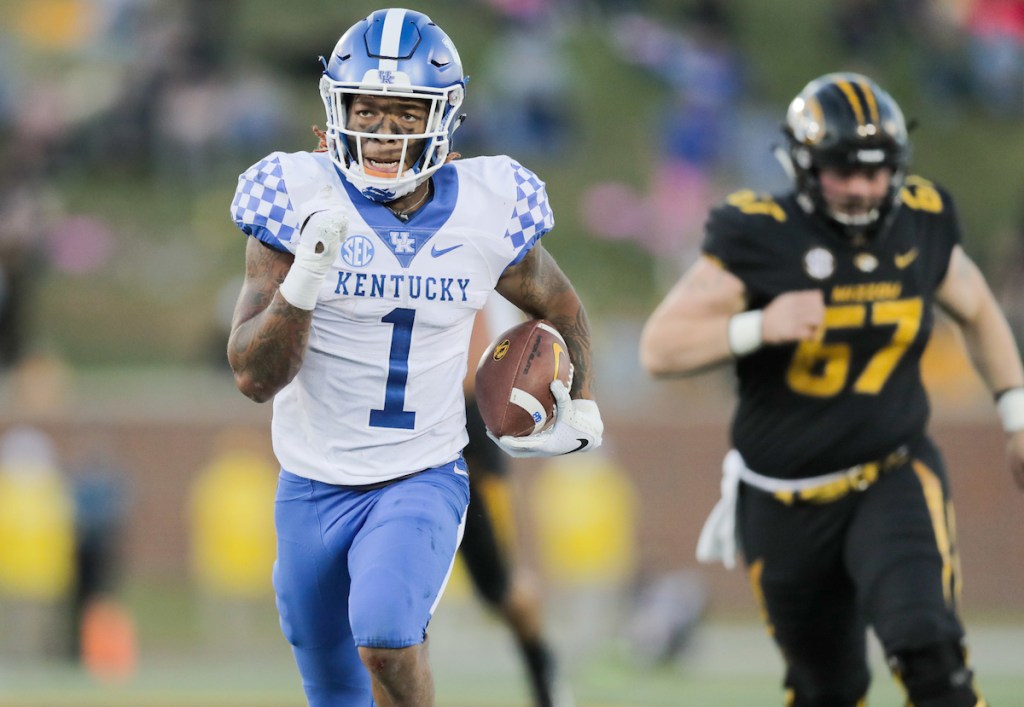 Kentucky receiver Lynn Bowden says everyone will "have to come to reality" eventually about the success of Kentucky football. (Vicky Graff Photo)

Kentucky being picked to finish sixth in the Southeastern Conference Eastern Division was really not a big surprise. Despite going 10-3 last year and having a five-year win streak over South Carolina and four-year streak over Missouri, Kentucky got little respect at the SEC Media Days in the preseason voting.

That continues a trend in recent years where UK has been undervalued by media members to start the season even if UK has finished second in the SEC East the last two years and been to three straight bowl games now under Mark Stoops. Don’t forget, too, that UK did end a 31-year losing streak to Florida last season.

“We are really just building off of last season, and I think it all started with the Florida game,” senior offensive guard Logan Stenberg, a preseason All-American, said. “We took a lot of momentum from that and really got guys to buy in and say, ‘We really can. We can do whatever we want. We can win games and compete with anybody out there.’

“We’ve really been taking this off season to get bigger, faster, stronger, working on our team chemistry and really our technique and just getting ready for this season so we can win as many games as possible.”

Receiver Lynn Bowden, Kentucky’s best returning playmaker, says few see how hard the players have worked since the season ended on and off the field — as well as the classroom.

“Going hard in everything we do. I think that’s going to help us,” Bowden, a junior, said.

Yet he understands the perception of UK football is that last year was a fluke, not the start of even more success for Stoops and the Cats. That’s why the Cats were picked to finish behind Georgia, Florida, Missouri, South Carolina and Tennessee this season.

“Everyone just thinks we are either handed a W (win). Everything we do is not good enough for anybody around the world. I’m fine with that. I’m not here to please anybody but my teammates and my coaches and our fans,” Bowden said.

“If anybody wants to think about us any different than what they should see us for, then that’s on them. I don’t want to come off being negative, but you have got to come to reality sooner or later. We are a good football team, whether you want to believe it or not.”

Senior linebacker Kash Daniel says because players like linebacker Josh Allen and Benny Snell have moved on to the NFL does not mean that UK doesn’t have talented players ready for their chance to play. 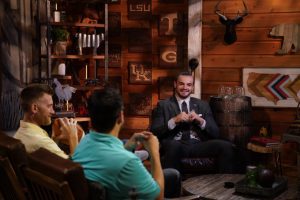 Kentucky linebacker Kash Daniel told ESPN’s Marty Smith and Ryan McGee at SEC Media Days that the Cats were not planning on taking a step back this season. (UK Athletics Photo)

“Coach Stoops, he’s not going to offer people to come here and sit on the bench and get free gear and walk around campus and go to school. He’s recruiting players right now to come in and take my job,” Daniel, a third-team preseason all-SEC pick, said. “That’s what building a program is. He’s not just building a two or three-year team. This is now a program to where we can now reload instead of rebuild.”

Reload is not a word that Kentucky football has used often. Kentucky had not had a 10-win season since 1977. But this is a new attitude where Daniel and others say the expectation is to be in Atlanta to play in the SEC title game, something UK would have done last year if it had been able to beat Georgia.

“We had the biggest game in Kentucky football history in Lexington, got embarrassed (in a 34-17 loss to Georgia). So we have to come back this year with a stronger mindset, stronger mentality that 10-3 is not acceptable,” Daniel said. “Coming as runner-up in the SEC East is not acceptable.”

Think about that. Being second in the SEC East is “not acceptable” to UK players. Not long ago just winning six games to get to any bowl game was acceptable to most UK fans before former coach Rich Brooks started changing that mindset and Stoops has built on that mentality.

“So that’s been our whole goal throughout winter conditioning program, throughout spring ball, throughout summer workouts. Take it up a notch. Not only get to Atlanta, but to win in Atlanta, cause if you get there, you might as well win,” Daniel said.