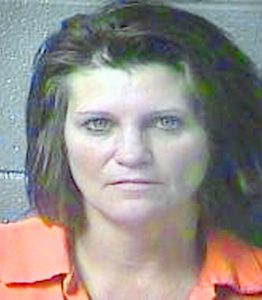 At 10 a.m., officers from the Danville Police Department and Boyle County Sheriff’s Office responded to a call about a female who appeared to be passed out in the driver’s seat of a vehicle parked at Greenleaf Shopping Center on Lexington Road, according to Assistant Chief Glenn Doan.

Officers found Cathy Rogers, 48, of Hustonville, and determined she was under the influence of narcotics. They also located suspected heroin in her vehicle. She was arrested and charged with possession of a controlled substance, heroin.

Two Danville officers suffered exposure to the drug when they inhaled it during their investigation of the vehicle, according to Doan. As a precaution, both officers were administered Naloxone (Narcan) and were treated at Ephraim McDowell Regional Medical Center.