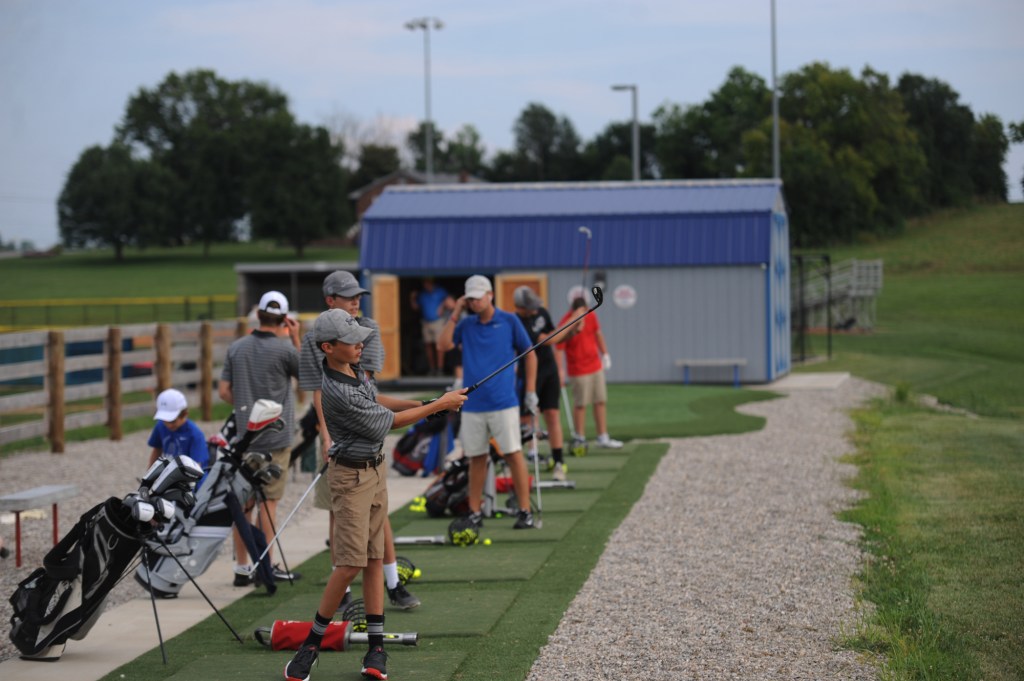 Entering his 17th season as boys golf coach at Mercer County High School, making him the most tenured coach at the school, Jay Anderson will have something he’s never had before and believes no other public high school in the state has either: a high quality on-campus golfing facility.

Featuring an indoor storage unit, which can be converted into a driving range box in case of inclement weather,  turf putting green, several tee boxes, and multiple targets, the practice facility allows his golfers to use every club to hone their skills. 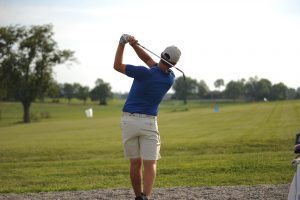 Senior Reed Gritton looks out at the on-campus driving range as he sends a ball flying toward the flags. (Photo Derek Brightwell)

The facility, which was completed at the end of last season, is a tribute to Anderson’s longtime assistant coach, Phil Williams.

“This facility had long been a dream of his, and we’re slowly working towards it,” Anderson said. “He had some lymphoma come back, and in his honor we received a donation from an alumni who knew about Phil’s desire to have this facility become a reality and that kind of kickstarted the project.”

Through donations, the Titans were able to fulfill that dream with the $50,000 practice space that is still growing. While the current expansion is simple maintenance and putting barriers in place to keep the surrounding gravel off of the turf, the long term goal is to put a golf simulator in the storage shed to give golfers a chance to practice year round.

Anderson can already see the benefits of having this practice facility in only its first full year of existence. He has seen an increased turnout this year, including golfers at the middle school level. For a coach whose main goal is expanding the game of golf in the area, it has been a blessing. 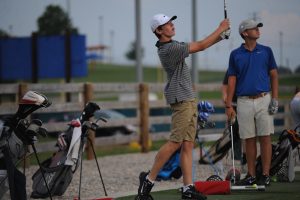 John Whited looks on at his hit during a mid-practice closest to the pin contest between he and Reed Gritton. (Photo Derek Brightwell)

“Our goal is to use this to expand our program to reach kids about the game of golf and the competitive component but also the life lessons that the game presents,” he said. “We obviously want to be competitive and our goal is to reach the state tournament and win the region but ultimately, I feel like my job is to promote the game of golf and teach kids a game they can play until they’re 80-90 years old. For some of them, golf may open up a job opportunity, they might conduct business on the golf course. As a coach, to some extent it’s about wins and losses, but for me there’s more to it.”

The practice space has also done a lot to inspire the current group of golfers Anderson has. Knowing they had this to come back to sparked their interest during the offseason, and Anderson can already tell the difference.

Honoring his assistant coach of 12 years is the most important thing for Anderson when it comes to this facility. It is named after him, and his name is emblazoned on the side of the shed. Still, Anderson feels sad that Williams was not able to see his dream realized.

“It’s his legacy; I call it his Augusta,” Anderson said. “In his truest form, Phil was about kids and his love for kids and people and the game of golf and this facility kind of embodies all that into one. I wish he was out here to utilize it. This would’ve been his earthly heaven, so to speak. It’s a way for us to always have a piece of him with us.” 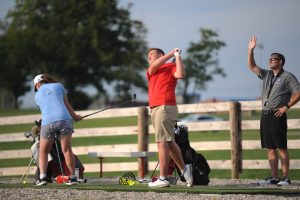 Last year, the Titans finished in the top half of the fourth region, and sent junior Reed Gritton to the state tournament, making him only the second male golfer to achieve that feat in school history.

This year, Gritton returns as a senior with the goal of winning the regional tournament to become the first Titan to go to state in back-to-back years. Together with junior Logan Thompson,  Mercer has a dynamic duo that could give the school two state qualifiers for the first time ever.

However, Jay Anderson’s team is top heavy, as below them, most of the scores will come from less experienced golfers, some at the eighth grade level. Anderson hopes that the amount of younger golfers will benefit his team long term.

“Our tournament and conference schedule is tough and these guys will be tested early and often so it will be key that I keep them focused on the end result and taking away only positives from every round,” he said. 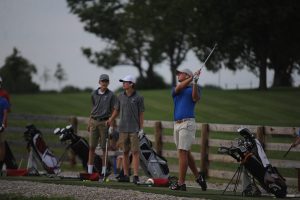 Senior Reed Gritton has targeted a regional championship as one of his personal goals for the 2019 season. Last year, he was just the second Titan boy to make it to state. (Photo Derek Brightwell)

“It really benefits our team because we’re veteran loaded at the top and then we have a lot of youth at the bottom, so we’re not going to qualify as a team, but I have those two individuals,” Anderson said. “So taking more individuals gives them more opportunities to qualify for the state tournament. I like it, but if I was a team who was in the running for the region, I might not like it. It really just depends on the circumstances of your team.”

He believes that with those changes, Gritton and Thompson are legitimate threats to qualify for state. And as for the younger golfers, he hopes they will lay the foundation for a growing program for years to come.

“As our team, we just want to get better everyday and build momentum for the future and seasons to come.”