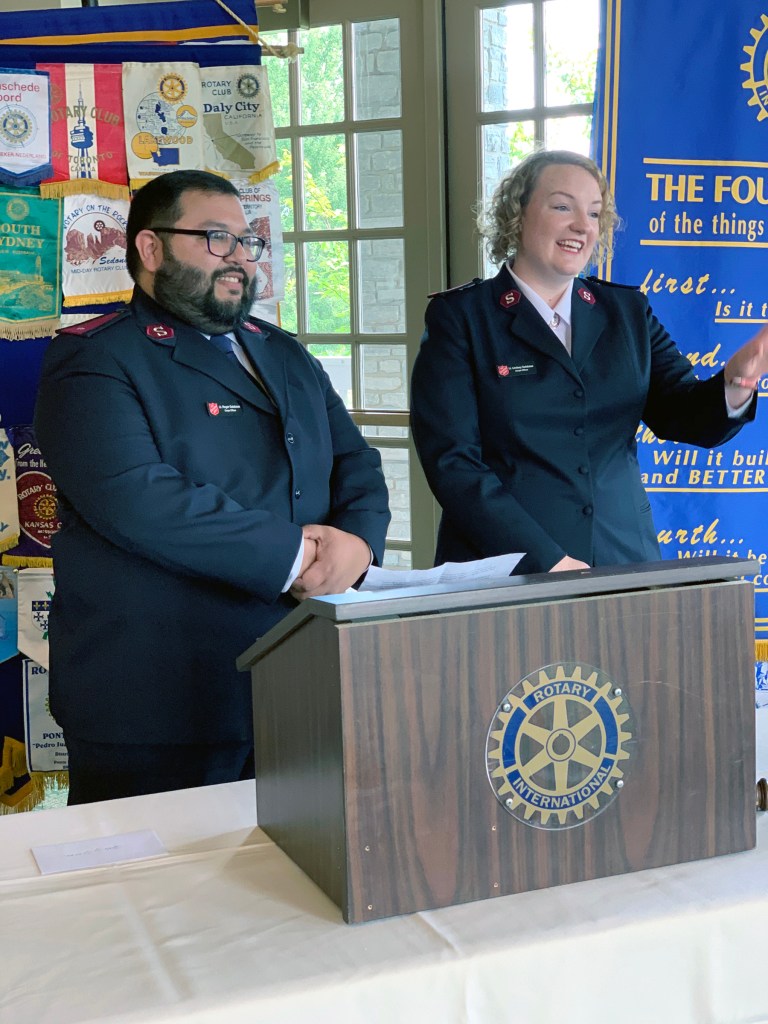 Lieutenant Roger Galabeas and his wife Lieutenant Lindsay have been appointed to Danville as the pastors and administrators of the five county area (Boyle, Casey, Lincoln, Mercer and Garrard) served by Danville’s Salvation Army office. They replace Carrie and Patrick Richmond, who were reassigned to West Virginia (incidentally, Patrick was recently promoted to Major). Roger’s background is in youth programming. Lindsey’s experience is in public relations, websites development and social media.

Roger and Lindsay met while serving in the Salvation Army and married in 2014. The Galabeas moved to Danville from Tyler, Texas. This is the couple’s first appointment as Salvation Army officers, having just completed Salvation Army’s seminary in Atlanta, Georgia, where they were ordained as pastors and officers.

Lindsey comes from a long line of Salvationists. Her parents were officers in the corps until she was 16. Roger’s parents joined the Army when he was 16. They are currently officers as well.

Roger has a degree in music and plays tuba, guitar, and sings baritone. Lindsey plays coronet, and has dabbled with piano.

The Salvation Army, much like Rotary, is an international organization. It started in London, England, in 1865 as the vision of William and Catherine Booth. At a time when women weren’t generally allowed to speak, Catherine was the first development director of the Salvation Army. She was very sought after as a speaker, often went into the richer parts of London to raise money. The couple’s original vision was to preach the gospel of Jesus Christ. They soon learned that it was hard for someone to hear the Gospel if their stomachs were empty or bodies were filthy. So they helped with mitigating the social injustices of the time. William Booth worked with the underprivileged in London’s East End where a lot of problems were happening, primarily driven by alcohol addiction.

The international headquarters is where it all began in London, England. The organization has a worldwide membership of over 1.7 million, consisting of soldiers, officers and adherents collectively known as Salvationists. The Army’s mission is “the advancement of the Christian religion, education, the relief of poverty, and charitable benefits to society as a whole.” The Salvation Army is in over 130 countries worldwide, and the services provided vary a great deal. The organization does different things in different communities because it is providing the services needed in that time and place. In Africa and India it offers children’s homes and in India primary schools are provided. India is also one of the few places the Salvation Army runs hospitals.

In Danville, the Salvation Army began as a service unit in 1912. In 2018 the Salvation Army of Danville provided 244 orders for over 14,000 meals, distributed over 5,000 gifts and toys to the Angel Tree program and were able to assist 16 different people with furniture as needed. It has a community center which offers a summer day camp program that currently has 80 students enrolled. During the school year the after school program enrollment is about thirty. During the school year, the program operates Monday through Friday. The Army operates a food bank, as well as offering clothing vouchers at their thrift store. Furniture and other assistance are also available at the thrift store. During the Christmas season, there is a Christmas assistance program called Angel Tree.

Finally, the Salvation Army in Danville has something called the Emergency Disaster Services, which is on call 24/7/365. Should a disaster arise in any of the five counties covered, the service responds with a mobile canteen unit and are available to help in whatever other capacity is needed by the local emergency service providers, whether that’s food preparation or hydration and nourishment stations.

If needed, the local officers can request from the Kentucky and Tennessee division headquarters for reinforcements from our Salvation Army churches surrounding our area. “Of course all those services cost money, as Rotarians you are well aware. In 2018 your Rotary Club raised $5,400. So thank you guys very much. One of us will definitely be joining Rotary!”