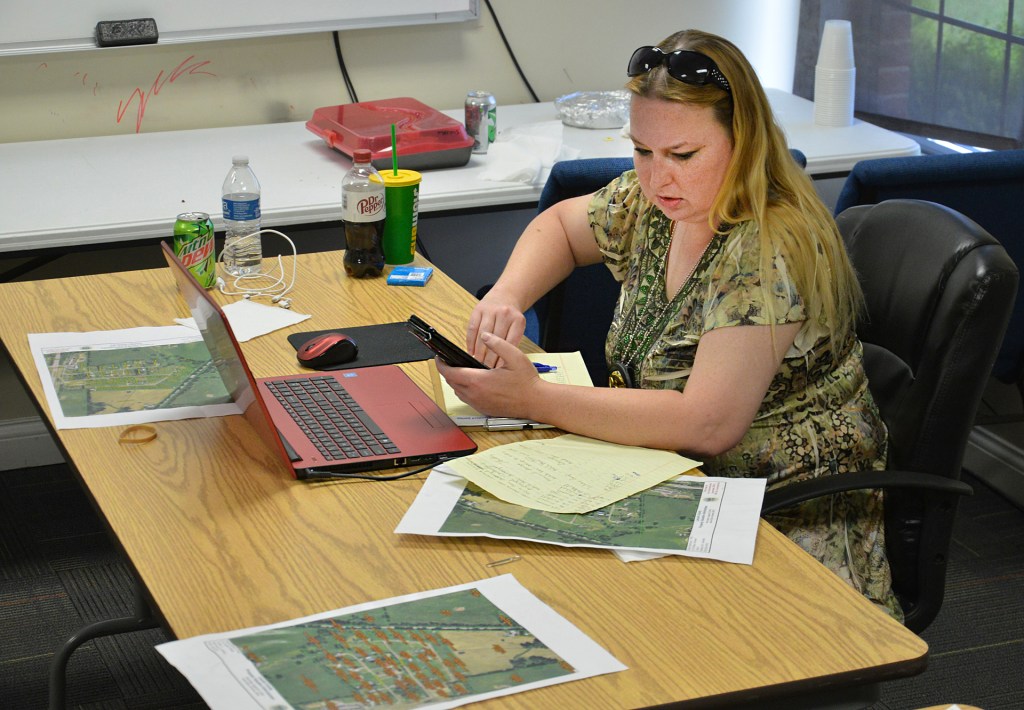 By BOBBIE CURD and ROBIN HART

“Mostly, the families of the area now just want to know when they’ll be allowed back in,” O’Quin said, since some houses were left standing and intact.

Thursday morning around 1:20, an enormous fireball could be seen from counties away as flames shot 300 feet into the sky after a natural gas pipeline ruptured — the cause still unknown. One person died and several were injured; five homes were destroyed, as well as other structures in the area. 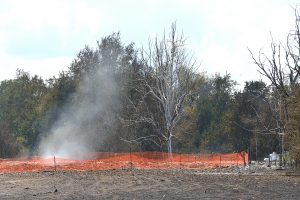 Photo by Robin Hart
The bleached skeleton on a tall tree is all that remains near the pipeline explosion site off of Indian Camp Road.

The explosion happened on Enbridge Inc.’s Texas Eastern Pipeline, one of the largest pipeline systems in the country. The pipeline is 8,835 miles long, according to the company’s website, and has the capacity to transport 13 Bcf (billion cubic feet) of gas per day.

Thursday evening, a meeting was held at the church with the affected families and representatives from Enbridge, with the Red Cross on-hand. O’Quin said 11 prepaid $500 debit cards were handed out by the company for necessities. Enbridge is paying for an “initial three-day supply” of any needed medicines.

“They’re paying for everything right now. They stepped up and said anything financial, they will take care of at the moment,” she said.

But many are concerned about what the company will do about the long-term issues.

“Some of the (questions) they weren’t expecting were about long-term medical conditions — heat exposure, exposure to possible chemicals from burning buildings. I think that will be more of a first-responder thing, because residents of the area seemed to get out quickly.”

O’Quin says Enbridge has relayed it will “be there until everything’s taken care of and everything’s done.” The company has been working to reserve multiple hotel rooms for a minimum of two weeks and has been trying to find rentals for people who have been displaced, she said.

“Right now, we’re having some issues with allowing people in, for people to get things out of the houses that are still standing. The federal government is working on that …’ O’Quin said, referring to the National Transportation Safety Board — which has taken over the site for investigation.

“We’ve been having some trouble getting people back in, but Don (Gilliam, director of Lincoln Emergency Management) has been working with them to figure out a way to do that. We’re trying to set up a solution to work together, to where we’re not interfering with their investigation.”

Enbridge has hired security to keep the area secure, by paying Lincoln County Sheriff’s Office deputies. “It’s an investigation, so it has to be a secure site,” she said.

If people really want to help …

As O’Quin was talking over the phone, she was also interacting with other emergency personnel, set up at the church. She confirms to someone, “Yes, five houses destroyed, nine with minimum to moderate damage …”

Maps from the PVA office were scattered across tables where O’Quin was gathering information to figure damage assessments and cost estimates; area journalists on laptops and cellphones typed up their stories from an adjoining room; Red Cross volunteers were making arrangements for lodging with displaced families; and several Enbridge representatives in a nearby classroom were meeting with other accident victims who needed immediate financial assistance.

Also, several church members were scurrying around the kitchen providing drinks, meals and snacks — even fresh sliced tomatoes and peaches — to everyone who walked by. 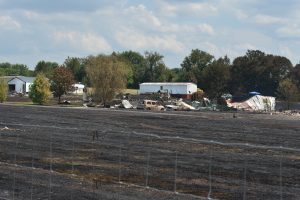 Photo by Robin Hart
The aftermath of the Texas Eastern Pipeline explosion in the Indian Camp neighborhood.

Scott Wilson and Robin Martinez escaped the natural gas pipeline eruption and firestorm early Thursday morning when they fled their home on Indian Camp Road. Friday afternoon they were trying to figure out how to manage their lives without having a home to go to — at least until officials are finished investigating the large disaster scene.

The couple came to the church, along with Martinez’s mother, Patricia Thurmond, and her aunt, Jessica Savells, and met with Enbridge reps who were providing some financial and lodging assistance to displaced families.

Savells said Enbridge issued the couple a $500 Visa card to purchase “incidentals,” agreed to pay their rent for August, and is providing them with local lodging through Aug. 17.

“But there is no discussion yet of the future,” Savells said.

Wilson said security officials allowed them to return to their home Thursday night to get clothes and whatever else they needed. However, they had to leave their dog and cat overnight.

Martinez said they told her she could return on Friday to feed the cat and let her dog out, but when she got there, they refused to let her inside the neighborhood. She said when she started to cry, however, they let her through.

The couple will have to board their pets until they can go back home, she said, and hopes that Enbridge will pay for that expense too.

Standing in the church fellowship hall watching Red Cross volunteers talk with other victims, Martinez said they have had to take off from work Thursday and Friday, and may have to take off part of next week just so they can get settled. 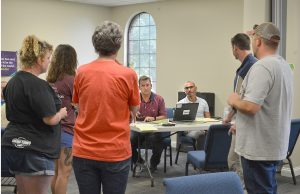 Photo by Robin Hart
Representatives from Enbridge Inc. meet with a family Friday afternoon to discuss how the company can help them temporarily.

She didn’t know what she was feeling about the situation at that moment. “We don’t know what we’re supposed to be doing.”

O’Quin said the command center at the church, for right now, is asking the public not to bring in donations. “Not right now,” she said.

The community has been amazing, and there’s been such an outpouring. “But we’re still assessing the needs of people. Citizens need to understand, if they bring donations, they may not be what people need.”

She said in a week or two, they should have a better grip on what’s needed. “People are still in shock. Not everyone’s thinking clearly of what they need yet.”

Also, many have dropped items off at the church, which she says — again — shows how compassionate the community is, “but the church is being overwhelmed with stuff, and we’re trying to mitigate … Not bringing anything here would be the best way to go … Once all these companies and corporations leave, we’ll really need the community support for these people. Right now, we need to let Enbridge do their job.”

In a press release issued by Enbridge, the company’s CEO and president, Al Monaco, said they are “deeply saddened that this incident has resulted in a fatality,” and expressed condolences to the family of “the person who was lost,” which was Lisa Denise Derringer, 58.

Enbridge said its “primary concern is for the individuals and families impacted by this incident,” and noted it had a “care team” on-site, providing assistance and support.

It also reiterated the incident occured on a 30-inch pipeline, and “the line has been isolated.” The release says, “Safety remains our No. 1 priority, and we will continue to work closely with emergency responders and other local officials.”