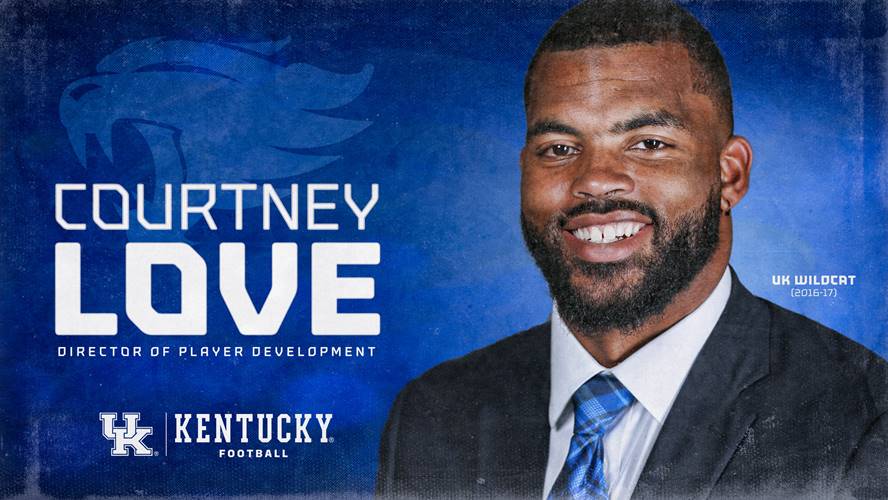 LEXINGTON– University of Kentucky head coach Mark Stoops has announced the hiring of former linebacker Courtney Love as the new director of player development. He will be responsible for preparing student-athletes for personal, academic and athletic development success through UK’s “4 for 40” program.

Love, a native of Youngstown, Ohio, served as a defensive graduate assistant in 2018, following a two-year career at Kentucky at middle linebacker. During his playing days, he totaled 168 tackles in 26 career games, earning a starting role in all 26. He was twice elected team captain by his peers and he was chosen to represent Kentucky at the Southeastern Conference Football Media Days in both his junior and senior seasons as well.

“I’m so honored and excited to be the director of player development,” Love said. “Coming to Kentucky was the best decision I ever made and I can’t wait to share my passion, and work with these players to help them become the best young men they can be on and off the field.”

Love noted some of his proudest accolades include winning the 2017 Wuerffel Trophy, an award that honors college football’s top community servant, and becoming a member of the 2017 Allstate AFCA Good Works Team, one of just 11 FBS players chosen for the team. He also was a 2017 Lott IMPACT Trophy quarterfinalist.

Love earned the recognition after volunteering with Amachi Central Kentucky, a mentoring program that pairs caring, positive adults with children and youth in the Bluegrass who have one or both parents in state or federal prison or are affected by incarceration in some way. He is still an Amachi mentor to his mentee, Antonio.

Prior to transferring to Kentucky, Love played in 12 games at Nebraska in 2014 as a redshirt freshman, totaling six tackles, including one TFL. He earned the 2014 Nebraska HERO Leadership Award and was named to the Tom Osborne Citizenship Team.

Love graduated from UK in May of 2017 with a degree in community and leadership development. He is currently working on a master’s degree in sport leadership from UK.