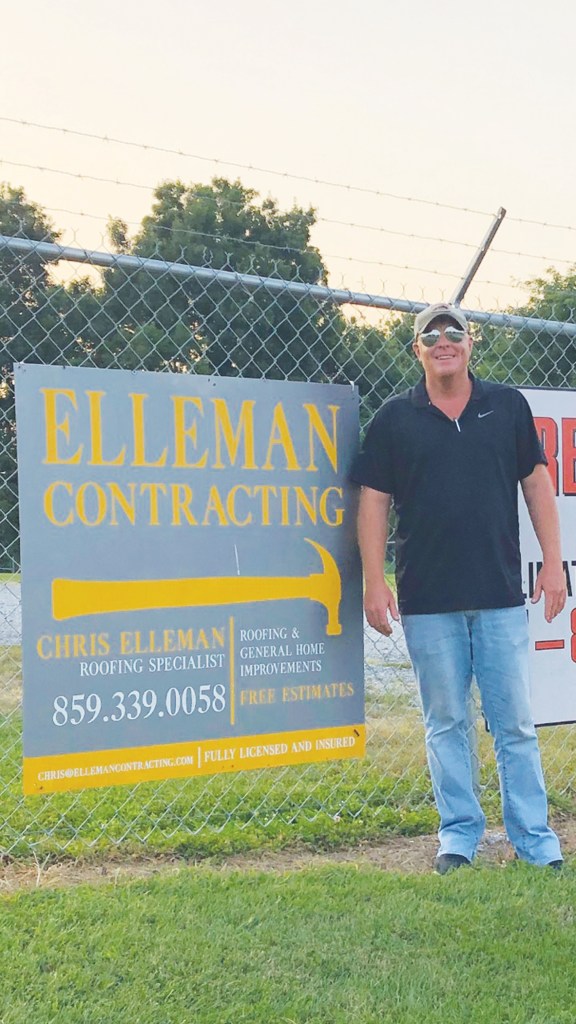 Chris Elleman knew someone in the community had to step up when he found out the registration numbers for youth football were so low. So he decided to take it on himself. (Photo submitted)

Signups were slow. In 19 days of enrollment Garrard’s little league football program had only registered six players for the fall. Chris Elleman decided to take action and on July 31, within four hours of his announcement on Facebook, the numbers had tripled. What triggered the spurt? Elleman’s gracious decision to pay for every single child’s entry fee that signed up for the youth football program.

The numbers have now ballooned to 50 entries (as of Tuesday).

Chris “Roo” Elleman operates several businesses in the Lancaster area, including Elleman Contracting and Elleman Properties, LLC, but he is also a lifelong native of the area, a 2000 graduate of Garrard County High School, and a former beneficiary of local little league sports programs. When he heard that the league was struggling he felt he had to step up.

“…Just to give back to the community,” he explained his rationale. “The community has been so good to me and gathered around me when I started my companies. Everyone welcomed me with open arms — they trusted me. They’ve given a lot to me and put their trust in me and I feel like in return I need to give back. I think that’s what everybody should do. We get caught up in the concept of what’s wrong with this county but nobody steps up to make it better. All we see is the wrong and no one ever steps up to give back to it.”

Fees for little league football are $65 per child which can be a big financial strain on the normal family. Elleman saw a way to give back to the community that had given him so much and decided to step up, remembering what sports had done for him as a kid and hoping they could do something similar for other youth in the county.

“I had reached out to Donnelly [Barnes] this morning (Wednesday, July 31), and we had talked about how the signups were going and he said a lot of kids hadn’t signed up. I don’t know if the money was the reason, but I felt like that would help. If it can help just one kid then it’s well worth it. It’s about the kids. The city doesn’t have a lot of money, they’re trying to do all they can, but they’re trying without a lot of help.

“Even as a kid where I grew up here in Lancaster, in a not so good spot in town, sports was a big part of our life — to all the kids around there,” Elleman said. “Sports is what got us through and kept us out of trouble. I feel like sports will help kids. There’s not a lot to do around Lancaster so if we can get these programs and get people involved, get kids involved, I feel that we’ll see a difference in the community.”

Elleman grew up with athletics being a driving force in his life. Along with football and baseball, it was basketball that carried him into further education where he played the sport first at Cayuga Community College in New York, then later in Georgia at Southern Polytechnic State University. Yet it was his parents, Mike and Beverly, that instilled in him the work ethic that has made him able to pass on his successes to future generations of Golden Lions:

“My mom is my full-time secretary now after retiring from the post office, and as far as getting us back-and-forth to sports she always put that first. They always made time. My dad worked for a federal prison for 28 years but was always there to coach us and get us through.”

Elleman’s contribution has already had a major effect on the citizenry. Brittany Murphy has enrolled her fourth child into the little league system and may not have been able to do so without Elleman’s help. But she is very grateful that her son, Kraven, will get to participate this fall.

“When you have four kids, 65 dollars adds up,” Murphy said. “When you have multiple children, every little bit helps. It’s absolutely amazing that someone took this effort to put toward these kids. It’s the small things that makes the difference. People like that — it’s what these kids need.

“I have a lot of things going on, and that little bit of money that it would’ve cost to sign Kraven — it made a lot of difference. We have a big vet bill and the kids were worried and offering to give up their extracurriculars for the sake of the pet. But I told them, ‘Everything will work out.’ Then we see that he is doing that and it just made all the difference in the world. I can’t put it into words.”

The city was also very appreciative of the contribution Elleman has made.

“We’re very grateful,” Mayor Marshall Norton said. “Whenever you pay the registration fee for everybody that signs up for football that can run into a great deal of money. Roo is very generous, so we appreciate it and I know all the football players appreciate that. It’s a great contribution.”

“Chris’s wonderful generosity describes his love for our community and the kids within it,” Councilman Chris Davis said. “It’s great seeing folks give back to their home.”

“When I saw how many more kids had signed up since Roo approached me to do this and we put it out on Facebook, I’m not going to lie, I had tears in my eyes,” former councilman and little league organizer Donnelly Barnes said. “What Roo has decided to do has allowed kids who wouldn’t get to play because of whatever reason to now get a chance to play.

“Elleman Contracting has set the bar high for other sponsors, that’s for sure. To me it would be nice for all sports to have sponsors like this so that every kid’s fees be covered.

“I think it’s key to know that Roo approached me about doing this and no one reached out to him. He’s doing it for the betterment of the kids, so every kid can have the opportunity to play football. As far as what this means for the program… it’s huge. It shows the support these kids here from the community. Personally, as a parent and coach, it’s very encouraging to see this from the community.”

Chris Elleman just wants to see every child in Garrard have the ability to showcase their talent and use it as a tool to make them a better person.

“We’ve got so many kids that are talented,” Elleman said. “A lot of parents may be at the point that the money they do have, it has to go back to buying groceries. But… sports gives those kids structure, discipline, and even just a positive outlook on life in my opinion. When you have people around that motivate you, that see the good in you, instead of always getting criticized — it’s a good aspect in life.

“I’d love for the community to get behind them, to get into the parks and rec and try to get behind these kids and just motivate them. It’s so easy to get into drugs now and I just want to mold it into something that these kids look forward to and have something positive. The youth is very important. We need to have things for these kids. At some point we have to start investing in our youth and start giving back. What’s it worth if you don’t put it back in?”

Sign-ups for little league football will run through August 8 and kids can register at city hall or at their back-to-school events on Thursday night… free of charge thanks to Chris Elleman.