Contraband trends: Recent incidents at jail, prison reinforce how officials have to stay on top of the drug game 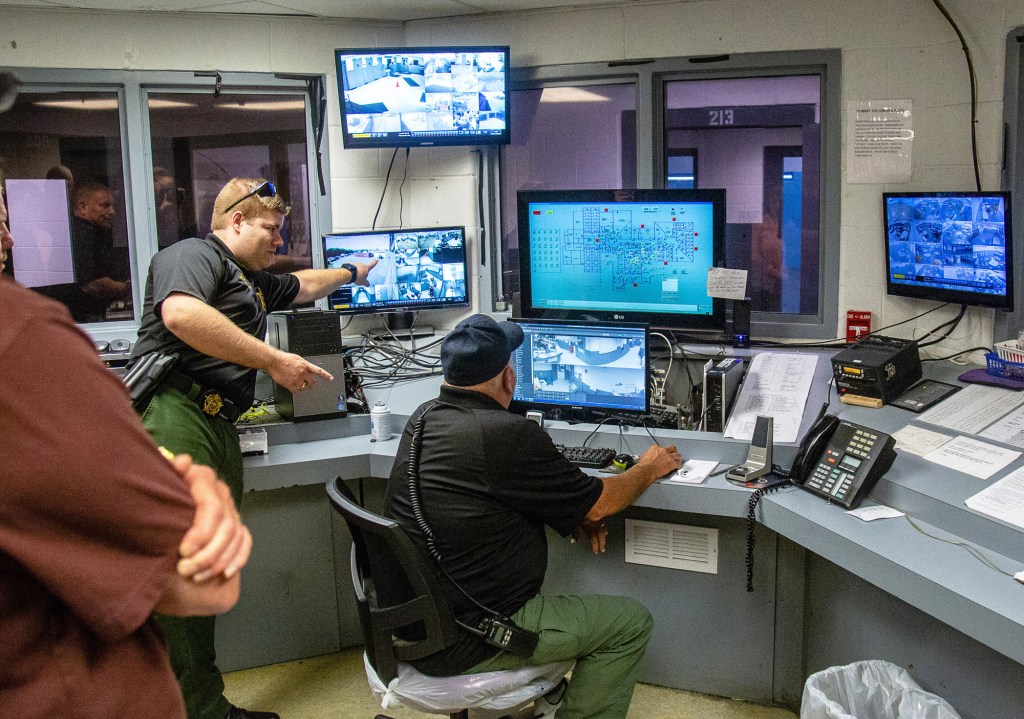 Lt. Michael Clem, left, explains some of the jail's central control room equipment during a past tour of the Boyle County Detention Center. Clem was the investigating lieutenant in the case involving several who were arrested for a contraband scheme at the jail. (File photo )

Prison and jail officials are finding it increasingly harder to keep up with creative ways inmates are able to get contraband into secure facilities, and it’s changing the way they have to do their jobs.

Recently, three inmates at Boyle County Detention Center were charged, along with four “outsiders,” for allegedly being involved in an organized scheme get drugs in.

On July 29, an inmate at Northpoint Training Center in Burgin was treated for a suspected fentanyl overdose; two correctional officers were also treated in the incident.

“That’s the thing with cases like these,” says Boyle County Jailer Brian Wofford. “It not only affects them, but it can affect jail staff, too.”

The DOC said the two Northpoint officers “began experiencing symptoms that are commonly associated with fentanyl exposure, including dizziness, nausea and elevated heart rates,” after searching the inmate’s cell. However, there was not enough substance found to be tested. 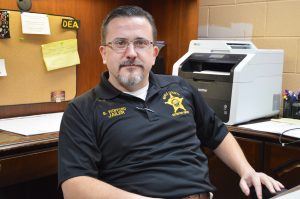 Boyle County Jailer Brian Wofford says that just as drug trends change, so do the ways inmates attempt to get them into jails and prisons. Most recently, seven were arrested and charged in a contraband scheme involving drugs being “launched” over a wall into an outside recreational area. (File photo by Bobbie Curd)

The inmate was given Narcan, a medication that rapidly reverses an opioid overdose, by the prison’s Fentanyl Response Team, as well as taken off site for medical treatment, along with the two officers. The day following the event, the DOC confirmed all those involved were “back to normal.”

Hannah Gibson, safety director with the DOC, said the department has “trained select officers to respond to any powder substance suspected to be fentanyl that is found in the institutions or encountered by staff in our Division of Probation and Parole.” The first training held for responders was in September of 2018, she said.

She says when an inmate is suspected to be on a substance, they are seen by medical personnel to determine if emergency intervention is needed. “Then he is placed in the restrictive housing unit on either constant watch, or a 15-minute behavior watch, depending on the extent of the situation.”

Gibson said in every case, an internal investigation is opened immediately to ascertain the drug type and how it was obtained. The DOC says there is no update on the investigation concerning Northpoint.

Wofford said although the Boyle jail doesn’t have a specific “team” for fentanyl overdoses, “there is protocol we follow, with a nurse and EMS. But we do keep Narcan here in case there’s an exposure to fentanyl or an overdose.”

Wofford said those who have never had to deal with fentanyl before don’t understand its incredible strength in incredibly small amounts. “Think about it. It’s used to tranquilize elephants,” he said, so it should be no surprise that something as small as a dime-sized amount of the white powder could have a deadly effect on humans.

“It’s very easily absorbed by the skin,” he said, which means extra precautions are needed by officers to ensure they’re not exposed. Although the drug is usually added to other drugs, Centers for Disease Control and Prevention says fentanyl can also be released into indoor air as fine particles or as a liquid spray to be absorbed by the body.

Employees at the Boyle jail wear gloves when doing searches or pat-downs. DOC requires each cell to be searched once every seven days; the jail has implemented each cell is searched every three to seven days, Wofford said.

Northpoint Warden Brad Adams said that during searches, pat-downs or even just entering an inmate’s cell, the powder form of fentanyl “could already be aerosolized or inconspicuous, at that point, potentially exposing the unaware officers by inhalation and absorption through the skin or mucous membranes.”

He said it has not been determined that the officers were exposed to fentanyl in this incident at Northpoint. “There was not enough of the powder to field test or send to the lab.”

Some of the latest trends, Wofford said, include inmates taking suboxone strips and camouflaging them. Suboxone is a brand of buprenorphine, used to treat pain as well as addiction to other narcotic pain relievers. It can be administered from a small strip that dissolves on the tongue.

“They take those little film-like strips of Suboxone, take a piece of paper and will draw and color in crayon on it, and melt the strip down into the crayon,” Wofford said. Afterwards, all they have to do is scratch it off and heat it up, and it delivers the drug.

“They have a lot of time to figure out how to get things through,” he said, when they live behind bars 24/7. “It can be hard to be proactive, just like in the case of the balloons. Thank goodness we had staff that were doing their job and found these items.”

With the seven arrested in connection with the contraband scheme at the jail, Wofford said balloons were filled with substances and thrown over the walls of the jail into the outdoor recreation area.

Chief Deputy Chad Holderman previously told The Advocate-Messenger that after an almost month-long investigation, the jail has evidence of two incidents where the scheme made way for drugs into the jail, with a third attempt that was in the works.

Wofford said launching baggies filled with drugs over a wall isn’t even the half of it, and brought up cases such as the one from 2014 in Jessamine County. An inmate was charged with murder after his cellmate died from an apparent methodone overdose. The inmate charged had been out on work furlough and was able to smuggle the drug back inside — by soaking his underwear with it.

“And then there’s the roach poisoning …” Wofford said, exasperatingly. In September of 2018, a sheriff in Polk County, Florida held a press conference about how inmates were getting synthetic drugs into the jail by receiving legal documents and letters, sprayed with the substances.

They were also using roach poisoning, such as Raid. The papers were passed on to inmates, who either smoked or ate them. Friends and family members of inmates were arrested in the incident, as well.

Wofford said he was thankful that sheriff held the press conference; it’s hard to keep up with the ever-changing trends of drugs, he said, not to mention trends of getting them into jails and prisons.

“We do continued training. We talk to other jails. If we find out a trend here, then we let other jails know, and they’ll tell us what they’re doing,” he said. “We have to constantly share with each in an open network, to be aware of these new and dangerous trends.”