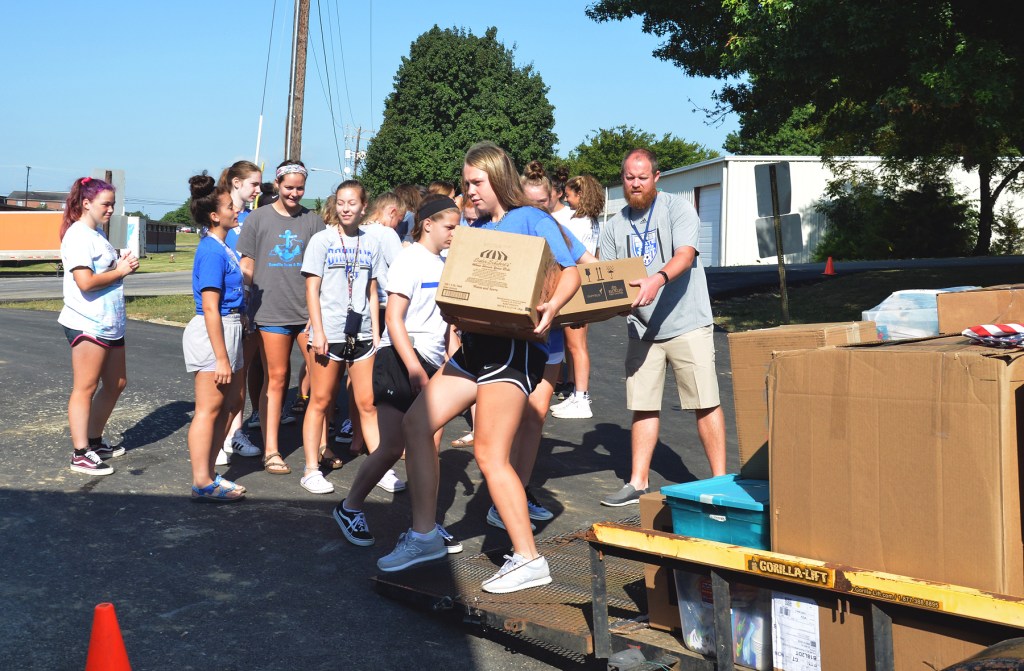 Members of Danville High School Girls Soccer team unloaded a trailer of boxes that the boys soccer team had loaded from classrooms at the former Jennie Roger school on Thursday morning. (Photo by Robin Hart)

The Mary G. Hogsett Primary School will be ready for its preschool, kindergarten and first-grade students by Wednesday, which is the first day of school for the Danville school system. But on Friday, construction workers, school maintenance and custodial crews, painters, playground installers, HVAC professionals, cleaners, carpenters, teachers and high school students were working furiously to get the building ready for the upcoming school year.

Thursday morning, the DHS boys soccer team loaded trucks and trailers with boxes packed with classroom items from the former Jennie Rogers school, where preschool, kindergarten and first-grade classes were held last year while the Hogsett renovation and expansion was in progress.

The girls soccer team unloaded the boxes at the new Hogsett building and stacked them according to grades in the flex room at the new school. 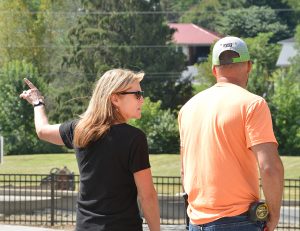 On Friday, about 50 DHS football players and coaches packed two 26-foot U-Haul vans and a couple of trailers at Jennie Rogers; while nearly as many teachers, school staff and clients from the Shepherd’s House loaded furniture and boxes at the new Hogsett building.

However, teachers aren’t allowed to unpack the boxes and set up their classrooms until 8 a.m. today (Saturday, Aug. 10), according to Christy Denny, director of administration services and facilities for Danville Schools. That’s when Danville Schools officially takes ownership of Hogsett because it will be considered substantially completed and can be used for its intended purpose, she said.

All of the heavy equipment will be gone, even though some minor work will need to be finished. But all classrooms, bathrooms and the cafeteria will be functioning.

Teachers have Saturday through Tuesday to unpack and set up their rooms to be ready to start teaching children on Wednesday.

Denny said her maintenance and custodial crews and school volunteers have worked all summer on projects for the school system. “We’ve spent the summer moving furniture,” Denny said.

They began by moving classroom and office furniture out of the old American National University building next to the high school, and into other locations within the school system. Also, four maintenance members along with the help of 14 custodial staff, who have functioned as “extended maintenance crew” have painted, installed blinds, repaired walls, took out old floor registers, drywalled and installed wall base.

As the Hogsett building entered its final stages of completion, crew members have pitched in with the final cleaning and furniture installations.

Walking through the hallways on Thursday, Denny told a couple of her team members, “Let’s just help ’em (the floor installers) scrub so we can move in furniture.”

Friday morning the work continued. As boxes of supplies and stacks of school furniture was being unloaded into the cafeteria space, other workers continued painting, cleaning and installing doors and HVAC equipment.

In the library, custodians Billy Curtsinger and Tim Dodds unpacked little chairs from great big boxes. They had already put together and installed all of the bookcases and desks in the library. They also assembled all of the teachers’ desks. “They’ve gone above and beyond,” Denny said.

She said when the furniture was purchased, she opted to save money by not having the company provide workers to assemble it. “By using our guys to install and put together,” she was able to save the school district about 20%. “It stretches our money a little further.”

She said they expected the completion of construction would be close to opening day, so no one was panicking. Denny is confident that with everyone working together, every room will be ready for the first day of school.

The interior of the old Hogsett school is unrecognizable. The main entrance opens up into the cafeteria with a tall ceiling and lots of natural light beaming through windows. Planners wanted it to be “inviting and bright,” she said.

Rooms and hallways are painted in soft, muted colors; “They’re soothing and calming,” she said. Office doors have circular windows; orange circles on the floor designate water areas, around fountains and sinks; and the entrance walls of the girls and boys bathrooms are shades of green and blue. 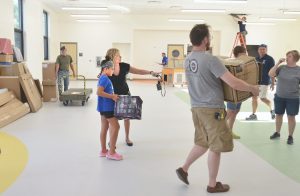 Christy Denny, director of administration services and facilities for Danville Schools points a student toward the stack of boxes where she should place the crate, as other teachers and staff help with the move Friday morning. A construction crew member also was replacing a ceiling tile during the move. (Photo by Robin Hart)

There are also sinks in every room. All shelving sets low to the ground, and the large interactive TV is even closer to the floor so that students can easily see it.

The school building was designed with the youngest students in mind. Denny said, “They learn through play.”

The gymnasium is no longer a conventional gym, but has been divided into two spaces — one for P.E. classes, and one for an indoor playground where children will be able to develop their gross and fine motor skills. Tempered glass garage doors will be added so that children and easily go between outside and inside play areas.

Mats and balance beams will be on the floor, along with tricycles. There will be areas on the walls where children can work on their fine motor skills by playing with latches, locks, tie things and snaps.

Lots of people ranging from the DHS sports teams to teachers, principals and staff have been working to get Hogsett ready for the school year.

When finishing a project of this size, Denny said, “You have to work together.”