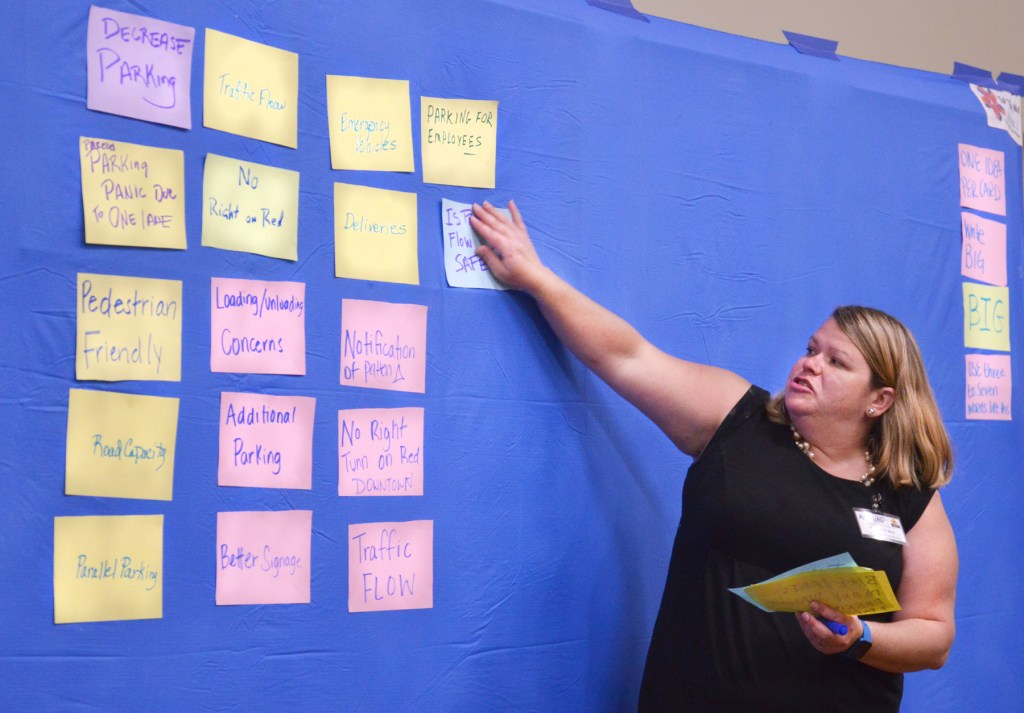 Candace Wallace helps to facilitate a meeting of downtown business owners by organizing their concerns on piece of paper for everyone to read. (Photo by Robin Hart)

Bike lanes, traffic flow and better communication from the state Transportation Cabinet were among the concerns downtown business shared during a meeting this week about the lane reduction trial on Main Street. 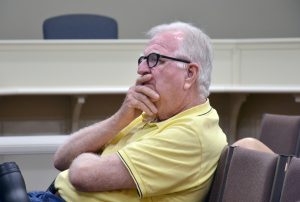 One county magistrate pressed the state’s hand on just who would be making the final decision about the road’s lane future.

Tuesday, a handful of downtown business owners and public officials met with state highway engineers to talk about their concerns for Main Street’s trial lane reduction project. The meeting was not publicized; personal invitations were hand-delivered to business owners a few weeks ago. Another meeting is being held today (Thursday) for elected officials and first responders; and a meeting to hear the general public’s input will be scheduled after the trial period is over.

Matt Simpson, an engineer for the project, said on Tuesday, “We’re having a meeting with all the business owners along Main Street and corridors. We want to make sure that all concerns, however small or big they are” were heard. “We understand the impact is different for business owners on Main Street than it is for people who drive it every day.”

A traffic consulting firm designed the lane reconfiguration for Danville’s Main Street, Simpson said. “They have a model that says it will work. But obviously we want to put it in place and make sure that there’s not something the model didn’t catch,” Simpson said.

Boyle County Magistrate John Caywood asked Simpson who was going to make the final decision if the lane reduction would be implemented permanently. Simpson said the transportation cabinet would take elected officials’ and the public’s concerns into consideration.

Caywood again asked who would ultimately decide how Danville’s Main Street would look like.

“The final decision will be made in Frankfort,” Simpson replied. “We have the best intentions and we feel it’s a safety improvement. We’re not going to force it down anybody’s throat.”

Simpson said, “there may very well be some things that we’ve not thought of. We want to make sure we’re aware of them and consider them in this process before the decision (to make the lane reduction permanent) is made.”

Candace Wallace, a researcher with the University of Kentucky, handed out colored sheets of construction paper to everyone in the room Tuesday, and asked them to write down their opinions on the following question: “What are your concerns with the new roadway configuration on Main Street?”

After a few quiet minutes passed, as people were writing their answers, Wallace divided the small crowd into groups of three or four and asked them to consolidate their pages, and write the summary of their opinions on separate pages.

Wallace collected the pages and attached them to a bright blue wall so that everyone in the room could read them. 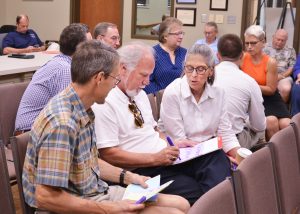 The pages were moved and organized into common themes and then the participants discussed the basic concepts that seemed to be most concerning to the group.

The strongest concerns about the lane reconfiguration of Main Street that were summarized included:

• the adequacy and flexibility of lanes to accommodate emergency vehicles, turning radius and funerals;

• consistency of traffic flow (slowing down traffic but not causing congestion);

• better communication from the Transportation Cabinet about lane and light changes and better signage;

• deliveries being made from the center “yellow dead zones” and other delivery options;

• parking for customers and employees; and

• bike lanes, with some being for the addition of them while others are against.

Other ideas were discussed, like banning drivers from turning right on red in order to help keep pedestrians safe, for example. Someone also brought up not marking parking spaces on Main, that way drivers can fit any size vehicles in street parking and not worry if they are over a painted line.

Several said they wanted dedicated left turn signals installed at the intersections of Second and Third streets. Simpson said their study showed that not enough people turn at those locations to warrant the special signal lights. However, they could possibly be added in the future.