Video of classroom incident leads to investigation by Danville Schools 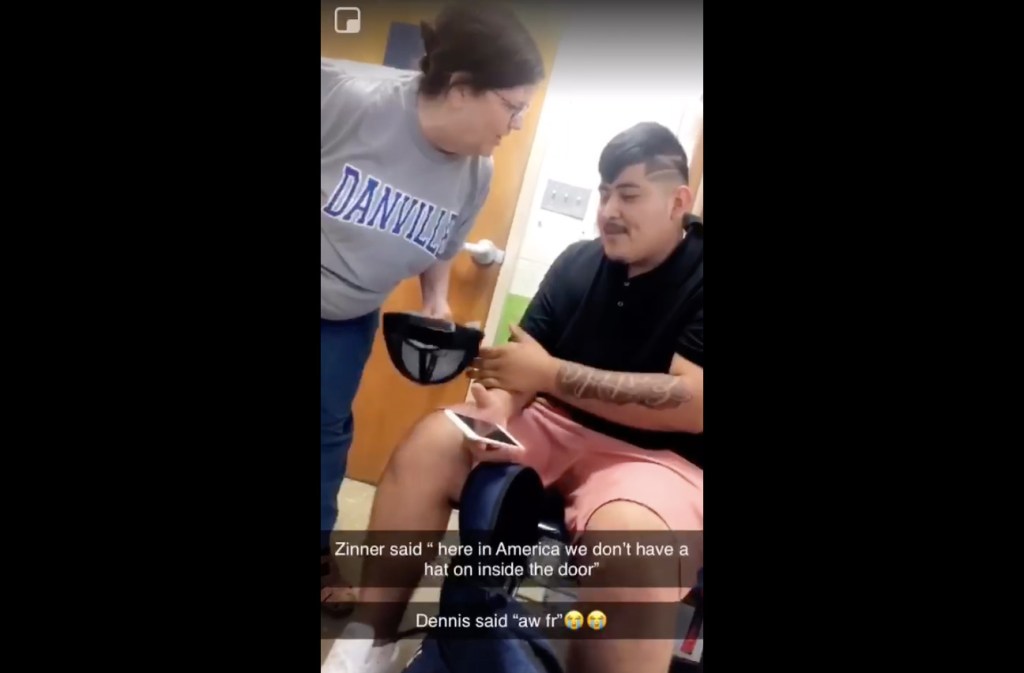 A screenshot from a video posted to Facebook shows a teaching assistant holding a hat taken from a Hispanic student at Danville High School on Friday.

Danville Independent Schools is launching a “full investigation” into a classroom incident from Friday, which was documented by a student’s cell phone.

In the video, which was posted to Facebook Friday evening, instructional assistant Joyce Zinner is seen holding the hat of a Hispanic student’s inside a Danville High School classroom, and saying to him, “In America, it’s rude to leave a hat on inside the door.”

The teenager responded, “Oh, for real?” while the student videoing it let out a gasp. The video spread through shares across social media.

Danville Superintendent Tammy McDonald said Monday there is no further information to share on the incident at this time. “The investigation is still underway,” she said.

“As of right now, we’re not calling any special meetings,” said Steve Becker, chair of the Danville Board of Education.

When asked what the investigation entails, Becker said, “As Dr. McDonald did say, we’re looking into it. I can’t comment anymore, of course, because it does deal with Danville personnel.”

Saturday at 1 p.m., Danville Schools posted a statement on Facebook.

“An incident happened at DHS Friday afternoon. The district is aware and a full investigation is under way. Our school district stands for respect and inclusion and will always deal with this type of situations quickly. We will always strive to provide a safe and welcoming learning environment for all our students.” The statement was signed by McDonald.

Social media comments have been mixed, ranging from those who want a full investigation and consider it to be a racially-motivated comment, to those who believe the public is becoming “too sensitive” and “you can’t say anything anymore,” insisting the incident was blown out of proportion. Others said students should not be allowed to have cellphones in the classroom, while some said ignorance from educational leaders should not be allowed in classrooms.

Monday afternoon, a reader sent The Advocate-Messenger a photo with an update. She said, “A peaceful protest was held today. DHS students all wore hats to school in support of the student.”

Although wearing hats inside the school is against school policy, she said students were given a slip of paper by Principal Thad Elmore as they entered the building.

It reads: “One of the strengths of our student body is our commitment to making all students feel equally welcome at Danville High School. We appreciate your choice to express this visibly through your clothing choice. We honor that choice as you come in the building this morning.”

Very few students were wearing hats when school let out Monday afternoon. But a Danville High School senior who had just left school confirmed that about a third of students had worn hats in protest.

The student, who asked not to be identified, said she believes Zinner was in a “safe room,” where students go when they are in trouble, when the video was taken.

“You’re not even supposed to have your cell phone out in there,” she said. “She (Zinner) is a great lady. She loves to help people with real-world problems. She’s a very loving person. I think she said the wrong thing at the wrong time.”