Horsey kept faith despite heart issues, now ready to show what he can do 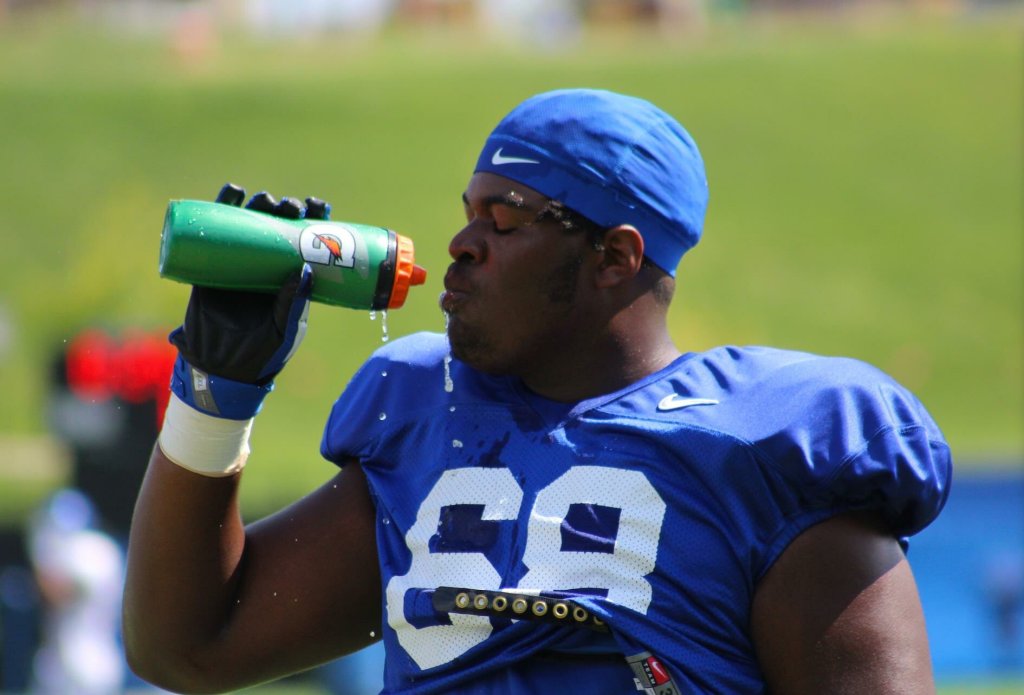 Kenneth Horsey is ready “to show BBN” what he can do this season as he continues his comeback from open heart surgery in April of 2018. (Vicky Graff Photo)

He says he was 100 percent healthy last season but also admits he lost strength after having open heart surgery just a few months before he arrived on the University of Kentucky campus.

“I wasn’t able to perform the best I could last year. I am 100 percent healthy now and ready to go and play and show these coaches what I can do,” said redshirt freshman offensive guard Kenneth Horsey of Sanford, Fla.

It’s unusual for an 18-year-old athlete to need open heart surgery and Horsey said family support and prayers, including those from Kentucky fans, helped get him through the scary ordeal and go through last season.

But did he really believe everything was going to be okay health-wise last year or was he just hoping it would be?

“Wow. That’s a hard question. The only thing I can really say is that the last year God has been teaching me about patience,” Horsey said. “He has shown me how to be able to stay down and wait for my time.

“I really feel like now my time has come. I just got to … it’s just one of those things you pray about and just have to have faith that God is going to bring you out. Whatever tests he brought you and put you in, he’s going to get you out of it. That’s all I can say.”

The UK lineman will still need an electrocardiogram every six months or so just to make sure everything is still okay with his heart.

“But I am 100 percent ready to go and ready to show BBN what I can do on the field this year,” he said.

His mother, Shari, still calls or texts him daily to check on him. Horsey says he doubts she’ll ever stop doing that.

“If you have met my mom, you will understand how she is. She might say she is not checking as much on me, but she is going to mom out every now and then,” the UK redshirt freshman said. “I don’t think anybody in the world could stop my mom from worrying. Everything that happened probably impacted her more than it did me.

“Seeing your son go through something like that … it was hard for all of us. They (his parents) don’t worry about me as much. They know I am in good hands with the trainers and staff. We all know the coaching staff and athletic trainers have my best interests at heart and if I can play, I’m going to play.”

Certainly his position coach, John Schlarman, is going to look after him because for the last year Schlarman has been receiving chemotherapy treatments after being diagnosed with cancer. Horsey said Schlarman’s courage helped him keep his own struggles in perspective.

“You still have to remember how good you have it. Just being able to watch coach Schlarman was amazing. Sometimes I would even forget he was going through what he did because he would never change. It was inspiring and still is,” Horsey said.

“You can ask anybody, he never changed. Every time he could be there, he was there with us and he was always smiling. He was always ready to go and always pumped. He brought that energy every day.”

Schlarman says Horsey is an “amazing story” to have had open heart surgery in April of his high school senior season and then be in full pads last fall.

“As a parent of four, that amazed me that he got to that point and that they (doctors) were confident he could do that. When we sat down after the season, everybody wants to contribute right away when they get here and it is always a little bit of a disappointment when they come in and redshirt like he did. It’s humbling,” Schlarman said.

“The thing we discussed is how much of a success story he was even though he didn’t play the game. The fact that he practiced and got himself in shape. He came in probably 330 (pounds) and right now is about 317 and looking really good. He has a lot of room for improvement just because he went through all he went through last year.

“That’s all behind him and he is building on just being healthy. I am excited about what he could do for us down the line and hopefully as early as this year.”