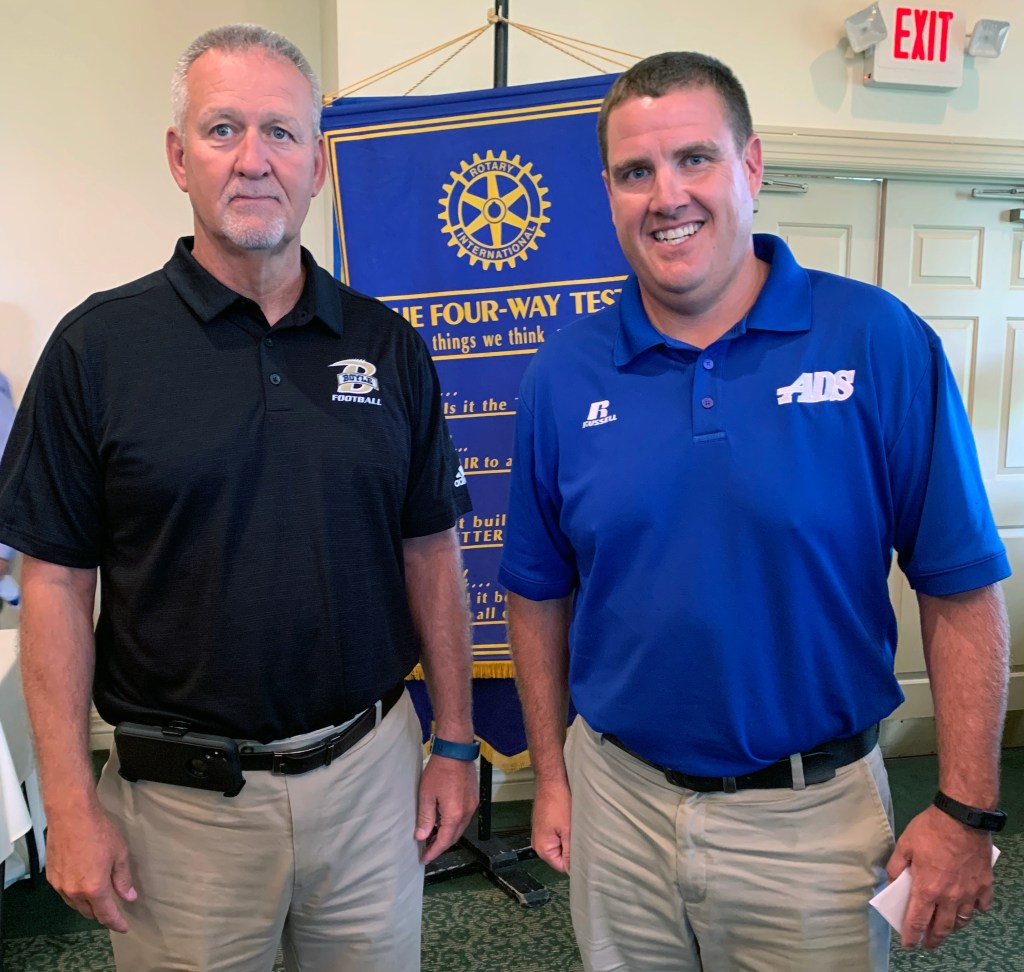 Boyle football coach Chuck Smith and Danville football coach Clay Clevenger gave their annual preview of the 2019 high school football season to Rotarians on Aug. 23. Coach Smith, the lead-off speaker, began by thanking the community for its support of both programs.

Coach Smith began his overview with, “We learned a lot from last year’s finish. You don’t start as a team … you have to become a team. I don’t think we ever became a team last year. We had a good year, but not a great year. This season, we’ve talked a lot about what being a team means. No one is happy with the way last year’s season ended.”

This year’s roster includes 19 seniors, and one or two have personalities that could develop into great leaders. Team leaders must maintain attitudes and focus when coaches are not present. The team chose “Finish the Mission” as their 2019 season motto. Coach Smith said he won’t feel really good about this team until it’s been tested.

The Rebels have a tough middle-of-the-pack schedule. They opened up with the Bob Allen Bowl against the Louisville Iroquois on Aug. 24. The toughest part of their season starts when they meet Danville in a non-conference game on Sept. 6. When asked about what the key to a winning season might be, Smith replied that he was happy with his skill players, but thought the season would hinge on the strength of both the offensive and defensive lines.

Asked about his assessment of last year’s final game, he responded, “I think somebody forgot to tell Corbin that we were the number-one ranked team!”

Asked about 2019 key players, Coach Smith responded, “I think we have five or six that will play college football. They won’t all go to Notre Dame or West Virginia, but they’ll play somewhere.”

Danville’s coach Clay Clevenger began by seconding Smith’s stated appreciation of the community’s support. Clevenger feels the team has pretty good speed, but needs experience, which will come from the tough schedule that they will face this season. His primary concern at this point is staying healthy and how well the team handles adversity.

He added, “We’ve got a good non-conference game tomorrow night (John Hardin, Elizabethtown) at the Bob Allen Pigskin Classic. I hope you all come out and watch some good high school football.”

He noted that the Admirals have 11 or 12 young men playing on college campuses right now. His assessment of the 2019 squad was that 2019 will be a learning year. The team is a young, fun group that practice hard and are very coachable.

Clevenger gave a strong endorsement to an unnamed player he characterized as an “Alpha Dog,” who he stated was the hardest worker and a leader off and on the field.  “He’s not afraid to open his mouth and get on guys and hold them accountable in any spot in our programming.”

When Coach Clevenger asked if there were any questions, Bill Payne addressed his question to both coaches, “Why don’t each of your teams include the other team in an annual bowl game?” Clevenger responded first: “We have talked to each other about doing exactly that. I know I can speak for Coach Smith in saying that we are both open to the idea.”

He explained, “It sounds like an easy and obviously popular action. But it would not be easy! The task begins two years before trying to find interested teams that have the schedule flexibility to commit. That gets more complicated when each candidate has to assess their likely team’s competitive strength and bowl options two years in advance.  Twenty years ago, when the Bob Allen bowl was created, there were five or six bowl games in Kentucky. Now there are probably more than 30.”

Coach Smith added, “We have attempted to set something up before; I think we even set a date. We ended up getting interest from some teams, but more teams wanted it to stay the way it is. Nevertheless, I do think it’s something that’s likely to happen in the future.”