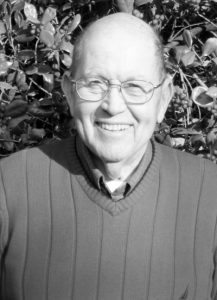 Born July 23, 1925 in Lipan, Texas to the late Hugh Rowland and Emma Wells Brown. Joseph entered the United States Army Air Corps near the end of WWII and continued his service in the United States Air Force through both Korean and Vietnam Wars, retiring in 1972 with 29 years of service. He was a loving father and a very kind man to all. He loved playing bridge, gardening, working on home repair projects with his son-in-law, Mike, and recounting stories of his military service.

In addition to his parents, he is widowed by the late Odessa “Cookie” Weeks Brown; and predeceased by his brothers and sisters, Lecil, Hugh “Brownie”, Raymond, Robert, Mildred and Veta.

The family wishes to thank the caring staff of McDowell Place, where he spent the past five years, and of the Willows, where he received loving care for the past four months.

Memorial service will be held September 7 at 2 p.m. in the Evans Lively Room at Centre College.

The family asks that in lieu of flowers, gifts be made in memory of Joseph to the Sanders Brown Center on Aging (http://www.uky.edu/coa/center-aging-foundation/make-gift).