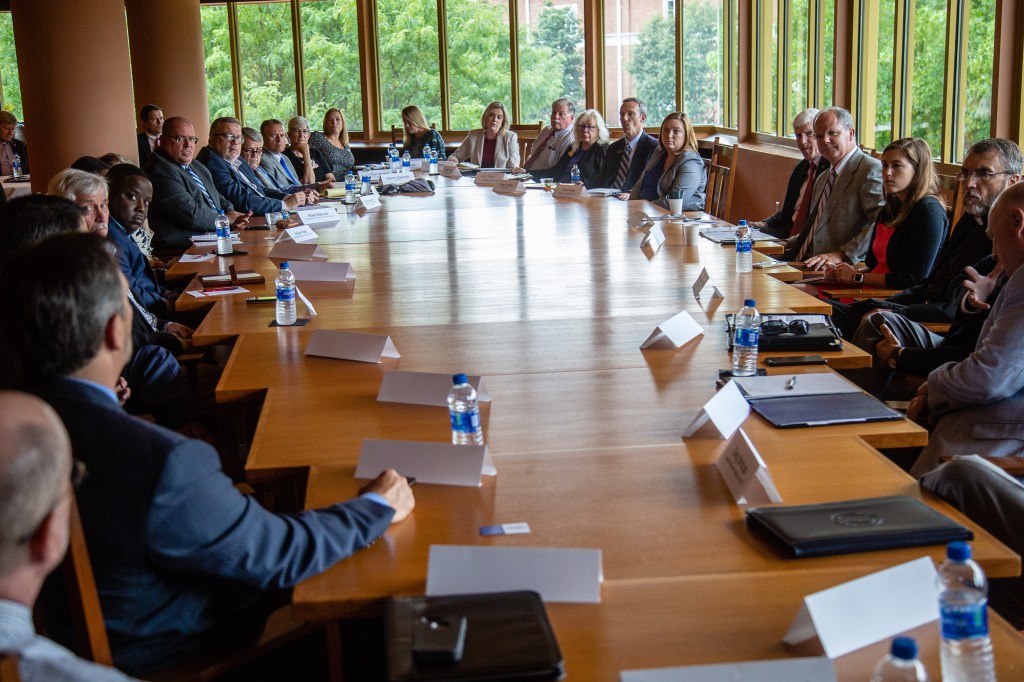 There are problems with higher education in Kentucky and obstacles to making it better, but there are opportunities to help people who have been left behind, as well. That was the gist of the conversation during the second half of a 100-minute roundtable conversation on higher education, held in Danville Wednesday by U.S. Rep. Brett Guthrie.

Centre College President John Roush, whose institution hosted the roundtable for regional education leaders from across Guthrie’s district, said the state has “serious work to do” when it comes to student retention and degree attainment.

Current rates of students who actually complete the degrees they go to college for are so low in Kentucky, they are “humbling,” Roush said.

“If I were a business (considering) a move to Kentucky, it would cause me to think twice,” he said. “Because those attrition rates for all different types of education are just not what they should be. And that’s not on Washington, that’s not on Frankfort. That’s on us. We’ve really got to double down and if we invite a young man or woman onto our campus, then we’ve got to make a deep and serious commitment to complete — whether it’s a certificate, a 2-year degree program or a 4-year degree program. We’ve got some work to do.”

“Retention has to be at the core of what we’re doing,” Carter said.

About 65 percent of students at Campbellsville are first-generation college students, meaning no one in their family had previously gone to college. At Campbellsville’s Harrodsburg campus, that percentage is around 80 percent, Carter said.

Many of those students don’t just struggle to afford tuition — they can struggle with ancillary costs such as textbooks that tuition doesn’t cover. When those textbooks cost hundreds apiece, they become unattainable for some, he said.

Others at the roundtable noted there are textbook leasing programs, e-textbooks and sometimes cheaper textbook options that are all combining to make it more possible for textbooks to be affordable.

Others followed up by questioning Guthrie on whether negative public perceptions about the costs of higher education have spread to members of Congress, specifically those who also sit on the education subcommittee of which Guthrie is a member.

Guthrie said he thinks there are some members of Congress who have yet to understand that the country’s student loan debt problem is best represented by thousands of people who wind up with a smaller amount of debt like $10,000, but no degree to go with it.

Guthrie said Congress as a body is beginning to address a “generation we forgot about,” when the nation’s educational focus was solely on going to college. As a result, those who weren’t cut out for college were left behind.

“There was this whole raft of people that were graduating high school without any direction on where to go,” he said. “I think that’s turned.”

“I don’t think it should go away — that’s what I wish everybody had, quite honestly. But not everybody is going to have that,” Guthrie said. “… This is where Congress is focused.”

“We need to do a better job of telling our story,” he said. “… That’s just what I think the current situation demands of us. We need to tell our story, we need to tell it boldly, honestly. And we need to take pride in the things where we see differences being made for good.”

Roush said a more “aggressive” approach is needed to dispel some of the negativity toward higher education that’s out there.

“Every once in a while, you’re bound to stub your toe taking that approach, and I’m prepared to deal with a little bit of that,” he said. “… We just need to be more aggressive about it and not assume that ‘everybody knows about that’ because they don’t, or that everybody is getting good information, because in many cases, they’re not.”

Work and education for those in jail

Guthrie said it’s “the best time in the world” to boost higher education programs such as certifications because of a recent turnaround in how industry views people in jail or who have criminal records.

Because companies need workers and can’t find them, “it’s a time in history, in our moment, that people who sometimes just slip through the cracks are wanted and needed,” Guthrie said. “And industry is willing to take a chance on that.”

Guthrie promoted the idea of jailers allowing work release for inmates so they can pay off their debts — something Boyle County Jailer Brian Wofford has said he intends to start doing here.

“We have a lot of people in jail today … because they’re not paying child support,” Guthrie said. “What’s better in the world than going to work during the day and go sit in the jail at night and pay their child support?”