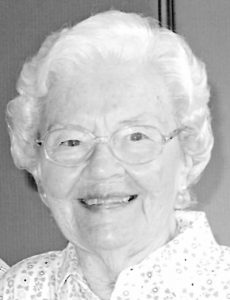 Barbara Armstrong Wold died on Saturday, September 7. She was the wife of Dr. Sidney Wold and the daughter of the former Norris and Porter Armstrong. Barbara was born in 1927 in Waukesha, Wisconsin, and grew up in Danville. She attended the old Maple Avenue School and Danville High School. She is a graduate of Duke University where she was a member of Delta Delta Delta sorority. Barbara married Sidney Wold in 1951 and they lived in North Dakota, Louisville, and Minnesota while he was attending medical school. They returned to Danville in 1962 where Barbara was a past member of the Little Garden Club, Young-Rodes Library board, hospital auxiliary, Centenary United Methodist Church, and Study Club.

Services will be 11 a.m., Wednesday, September 11, 2019 at Centenary United Methodist in Danville with refreshments from 10-11 a.m. Rev. Chris Morgan will officiate.

Memorial donations are suggested to Boyle County Public Library or Centenary United Methodist Church. The online guestbook will be available at www.stithcares.com