One Day: The different stages of theater life 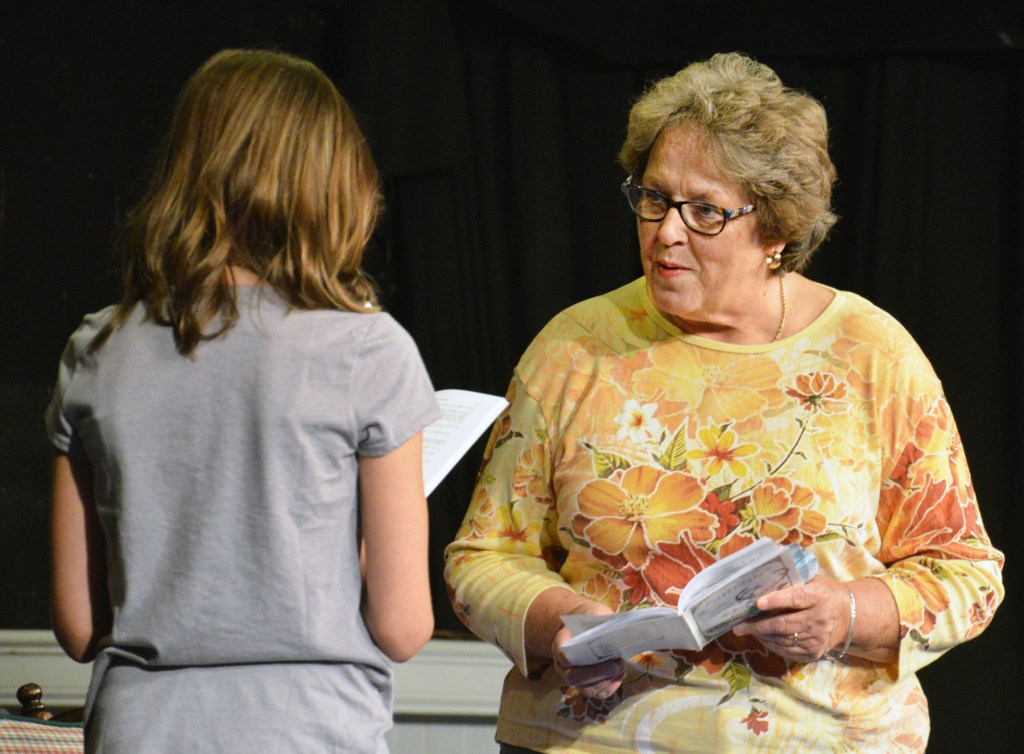 After 40 years with West T. Hill Community Theatre, Karen Logue has her managing director responsibilities down to a science. And that science usually proves, “You really can’t prepare for everything in life, you just gotta roll with it.” 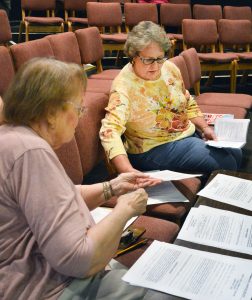 Alice Berka, Logue’s longtime theater partner she never does a show without, works with her on picking out actors for roles. Logue has been burning the candle at both ends, with back-to-back rehearsals, auditions and a benefit gala coming up for the theater soon. (Photo by Robin Hart)

When Logue was planning this season out, she knew it would be busy. At that time, she had Kolton Winfield on in a new position as community outreach coordinator. He helped with directing and holding auditions, as well, but left after about a year on the job to take a position with a theater in Springfield.

“Kolton and I worked on the schedule, and it looked good at the time, but we announced the schedule and he announced he was leaving,” Logue says. It was bittersweet, because she was so happy for someone she watched grow up on stage continue to climb the theatrical ladder. “I wouldn’t have wanted anything else for him.”

But, now here she is, directing the seven winning pieces from the 10-minute playwriting competition, which goes up for production next weekend, and directing “Young Frankenstein,” an intense musical comedy. And casting for “Fruitcakes,” the holiday show.

“And Alice (Berka) and I were going to do this Christmas show, so all of the sudden I find myself with auditions back-to-back,” Logue says, all the while laughing heartily. She loves what she does, even when she doesn’t get to take a breath.

“So — one in rehearsal, one on the stage and one in your pocket. And the gala coming up next weekend.” Oh, that’s a benefit planned to celebrate the theater’s 40th anniversary on Sept. 14, she says, at Arcadia Farm in Stanford. Tickets for the event, at $40 per person or $75 per couple, will pay for the catered, sit-down meal planned for inside Historic Shelby Manor.

“There will be a bar, music and entertainment, and we’ll share the history of the theater with special guests, and some pictures from the last 40 years in a beautiful setting,” Logue says. “It’s a benefit for the theater, but it’s also about a night to treat our patrons; we’ll be lucky to come out even, so it’s something we’re doing to give back …” She says the 40th celebration was decided on because “some of us may not be here much longer. Seriously! We’re up there (in age), maybe we’ve got another 10 years or so …”

She says with all these extra events going on, she’s extremely happy to have had a lot of help. “There are a couple of people in our cast who want to apprentice to be directors, so they’ve stepped up and also are stage-managing,” Logue says. They sit next to Berka, Logue’s trusty stage-manager extraordinaire she never works without, and take in her thought processes while she’s blocking the production against the original and master script.

“Like last night, we had auditions for the Christmas show at the main theater, then rehearsal at West Wing for the 10-minute plays, and Alice was doing both,” Logue says. “She said to me a couple of weeks ago, ‘how are we going to be in both places at once?’ which was a good point …”

Rehearsals for “Young Frankenstein” are Tuesday and Thursday nights and Saturday mornings; 10-minute plays are Sunday and Monday, which will end soon, but then the Christmas show will need to begin rehearsing … “I just keep thinking, I can do this until the Christmas show closes. Sure I can …”

Now that another show has been cast, it’s time to get ready for another set of rehearsals. “If you’ve already blocked your show …” which means setting up all of the movements on stage, “… you have to teach it all to them, to each individual character or role, walk them through the movements then add the dialogue. You have to give them an outline for that. Then go through it, page by page, and pull them together.”

Logue usually blocks productions four to five pages at once. “Then you have to add lights, sounds, entrances and exits. A lot of time, the script will give you some hints, but you have to groom it your individual space — everything must be groomed to fit the West T. Hill stage.”

Logue very seldom sits while she’s working. “Well, maybe toward the end, while I’m watching a run-through,” which is the full production from start to finish. “I take about 25 pages of notes, and give it to the actors afterwards, let them know what they can do specifically, tell them when they’re good.”

She calls herself “‘an actor’s director’ — I’ve been on stage, I know how difficult it can be. I know all the pitfalls from an actor’s perspective. And if they look at me like they don’t know what I’m talking about, I get that too,” Logue says, laughing.

Logue also takes care of her mother, who lives with her and husband, David. “David steps up at home because Mom lives with us, and he’s really helped,” she says.

Logue says, “I keep lists so I won’t be stressed, but now my lists are stressing me,” but ends it with her famous laugh. “I’m managing.”

To get tickets to WTH’s 40th anniversary celebration on Sept. 14, or to purchase season tickets, visit westthill.net.

Logue offers some pointers during Monday night’s audition for “Fruitcakes,” the holiday show the theater is putting on this year. Directly after the audition, Logue and stage manager Alice Berka began casting the show. (Photo by Robin Hart)

Karen Logue follows along with auditions Monday night at West T. Hill Community Theatre. As the theater’s managing director, Logue will cast and direct many of the productions. Since the community outreach coordinator left and took a job with another theater, Logue has been rotating her days from managing rehearsals and auditions, to preparing for this weekend’s benefit gala. (Photo by Robin Hart)