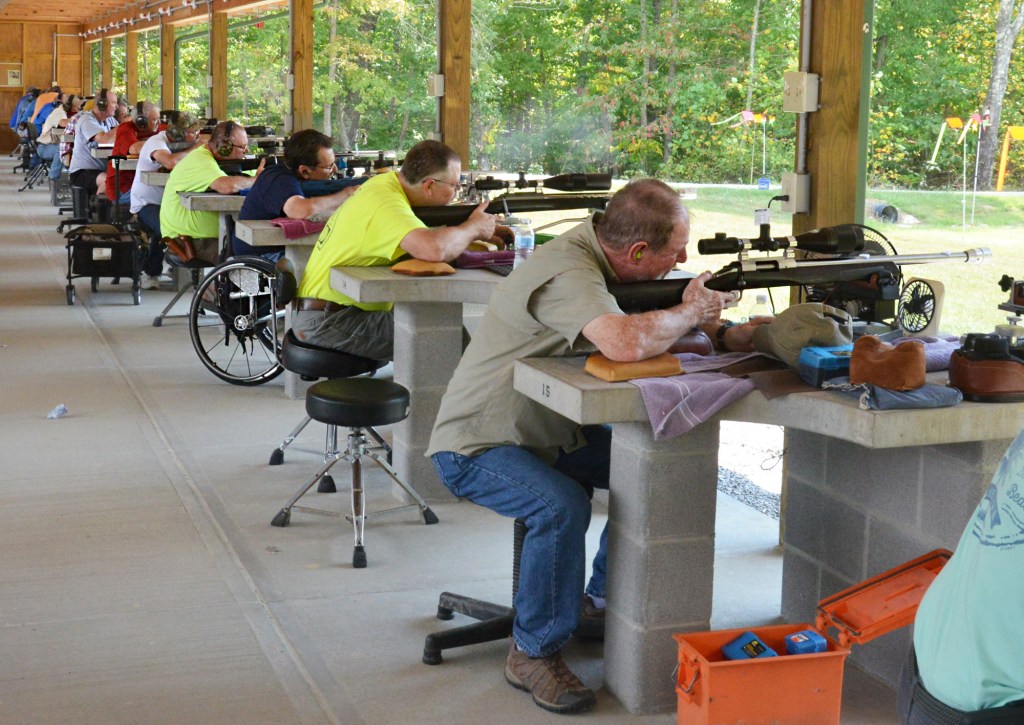 On Friday, shooters take aim at their targets which were 100 yards away. Today (Saturday) the targets will be 200 yards in the distance. (Photo by Robin Hart)

Tucked away at the end of a gravel road that winds through hills and meadows outside of Junction City, the Boyle County Fish and Game Club is hosting a national championship rifle event, which ends today. 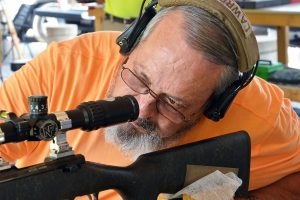 Garry Lawrence of Chapel Hill, Tennessee, looks through his rifle sight at the bull’s eye target, about the size of a pin head, 100 yards away. (Photo by Robin Hart)

Expert marksmen from all across the nation have come here to compete in the Ultimate Benchrest (UBR) National Championship.

“In this little bitty place, right here in central Kentucky, some of the people that are shooting out there today are the best in the world at what they do,” said Middle Tennessee Sporting Association President Rick Fox Friday afternoon.

In UBR competitions “You take the best rifle, and the best ammo possible, which is all handmade. You cannot buy this stuff off the shelf, and you take the best possible optics that you can buy. And you practice your bench technique so that you’ve got your rifle in the same position every time, and you’re always operating from the same position, all that being equal, and then you have to factor in the wind, which changes instantly in the field,” Fox said.

For example, just a 5 mile per hour wind will blow a 30 caliber bullet off target by one full bullet hole, Fox explained.

Holding up a sheet of paper with eight targets — the two in the center being used for only setting a rife’s sights — Fox said, “To be successful in this game, when you shoot four of these targets … you have 10 minutes to put one bullet hole in each of the bulls eyes,” which are only about the size of a pin head at 100 yards away.

And the only thing touching the rifle is the ball of your finger, he said.

Today, shooters are aiming at targets 200 yards away. The scores from both days will be tallied, and the winners will be the shooters with the highest scores, said Mark Henson, a local fish and game club member who was keeping track of the scores on his laptop inside the small clubhouse.

There are four classes of rifles used in the competition Henson said — factory, modified, custom and unlimited. Calibers are limited from .22 to .30. 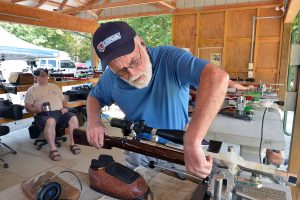 Henson said his brother, Billy Henson, knew the most details but he was out at the shooting range making sure the event was running smoothly.

He said the club tore out the old shooting range about two years ago and built the concrete, covered shooting pavillion. There are 20 permanent stations with seating for marksmen to set up their rifles. And there’s a long table stretching the length of the pavilion where others can get their rifles ready while waiting for their turn to shoot.

“Safety is highly emphasized,” Henson said. Before the tourney started, a safety meeting was held and all the rules were explained — no bolts in the rifles until the range officer gives the command; no one is allowed on the firing range, etc.

There’s also a security system in place which involves flashing red lights, sirens and beacons warning people that shooting is about to begin.

Several pop-up canopies were set up under the nearby shade trees and competitors milled around talking shop, making it almost feel like a family reunion. Crickets were chirping, birds soared above and when the wind picked up, a large assortment of brightly colored windmills, ribbons and other wind measuring devices that were set up between the pavillion and targets began to flutter, making the scene look like an obstacle course.

But when the range officer announced over the public address system that the next session was about to begin, everyone became quiet. Men began adjusting their rifles seated on metal stands controlled by joysticks. Gunstocks rested on leather sandbags. Everyone made sure their noise canceling earphones and earplugs were on snuggly and when the shooting began, gunshots echoed through the hills.

Jackie Stogsdill, of Somerset, waits for a strong gust of wind to die down before making his next shot on Friday.(Photo by Robin Hart)

A competitor at the UBR National Championship precisely aims at the target 100 yards away on Friday. The space between the firing range and the target is dotted with many colorful wind flags that help shooters determine wind speed which, affects their aim.(Photo by Robin Hart)