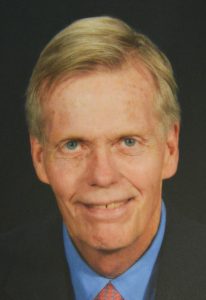 He graduated from Georgetown College (Ky.), with a B.A. in history and English in 1971. He was the editor of the The Georgetonian, Georgetown College’s student newspaper, the college’s representative to the Governor’s Conference on College Issues and a member of Lambda Chi Alpha fraternity. He was designated as a conscientious objector during the Vietnam War and served two years in alternative, non-combatant service at Lexington’s St. Joseph Hospital.

He was the special projects writer, an editorial board member and a columnist for the Danville (Ky.) Advocate-Messenger from 1979-2010, earning 90 Kentucky Press Association writing awards, including 33 first place awards; he was honored with the Kentucky Press Association Lewis Owens Award for career community service, the Kentucky Chapter American Cancer Society Press Award and the Kentucky Chapter Planning Directors Association Best News Coverage Award. He was a Kentucky Colonel. He served on the vestry of Trinity Episcopal Church, Danville, Ky. from 1986-1990 and 1998-2002. He was a past member of the Danville-Boyle County (Ky.) Humane Society.

In 1987, he organized and founded the Rally on The Square, a political speaking event and gathering for all candidates seeking constitutional office in statewide elections. The event became a staple of statewide political calendars for years to come.  He deeply loved his family, both living and those who had passed away, and enjoyed doing things for them. He maintained an annual holiday tradition of dropping off “chicken feed” snack mix and Tollhouse cookies for friends all across Kentucky.

The funeral service will be 10 a.m., Tuesday, September 17, 2019 at Trinity Episcopal Church, Danville with Rev. Amy Meaux officiating the service. Visitation will be 5-8 p.m., Monday at Stith Funeral Home, Danville. Memorials are suggested to the Boyle Co. Humane Society. The online guestbook is available at www.stithcares.com.