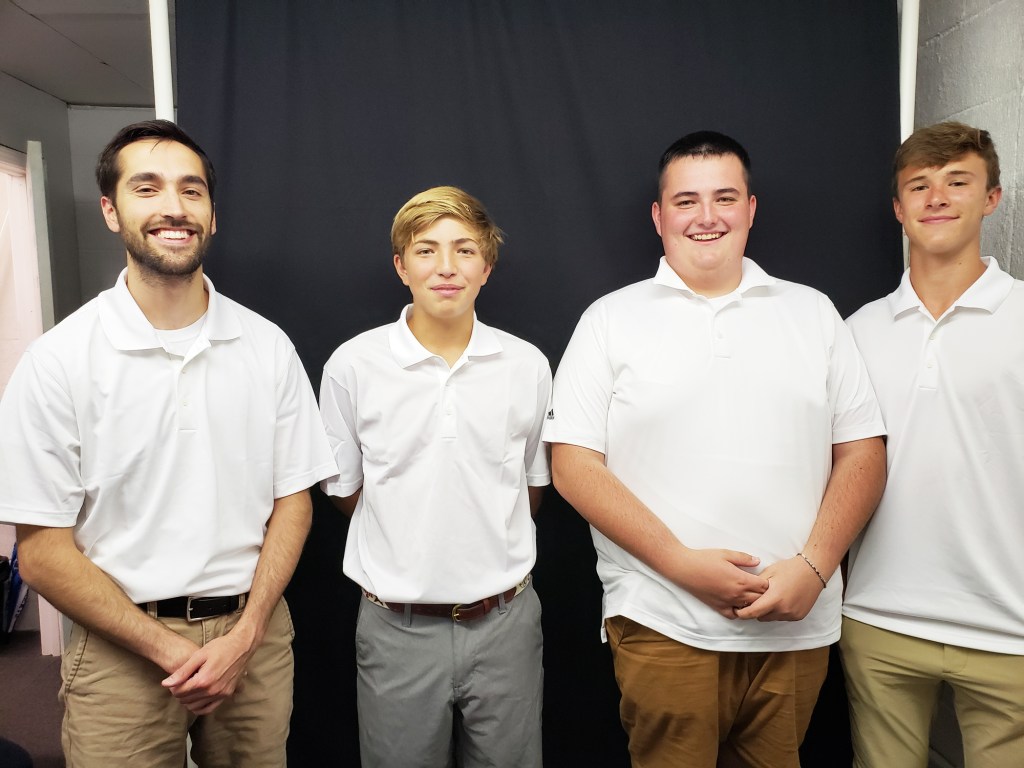 If you’re unable to get to Rebel Stadium for Friday night’s showdown between Boyle County and Christian Academy of Louisville, there’s still a way for you to watch the Rebels go for their fifth win of the year.

This year, Boyle County High School has started the Boyle County Sports Network — a streaming service that live streams the home football games for fans unable to attend in person. Friday night’s live stream starts at 7:15 p.m. on the YouTube channel “Boyle County Sports”. A pregame show will begin at 7:18 p.m. and lead right into the 7:30 kickoff.

This will be the second game BCSN has livestream broadcast this season, with the plan being for livestreams of every Rebel home game. It’ll be the third game the team has broadcast in general — technology limitations prevented a livestream of the game at Danville, but it can still be seen on the YouTube channel. In the first two games, the channel has amassed over 2,000 views. And the broadcast team expects this Friday’s much hyped match-up against CAL to far exceed that.

“Honestly, I expect this CAL game to get up to 4,000-5,000 viewers,” said Jack Little, who does play-by-play for BCSN. “Just the magnitude of this game and imagine how many people from West Virginia or Notre Dame are watching for Landen and Reese. (CAL’s) John Young going to UK. I think this game will get a lot of viewers.”

The idea for the streaming service started toward the end of last school year, with the full project coming together within the first week and a half of school to be able to go live for the first home game. Daniel McQuerry, who is the producer and director of the broadcasts, said that it was a lot of work to be ready for first kickoff.

“The time we started on the first day of school, we had no idea who was going to be our commentators,” McQuerry said of the challenges. “We had thought Matt Overing because he had the previous job at the Advocate-Messenger (as sports editor)  and went to Centre and just knows everybody and knows the football team. Then we had to find who was going to do play-by-play and they wanted to find a student. It was hard to find someone in the school in just a week and a half, but of course we got Jack Little who is great and did an amazing job.” 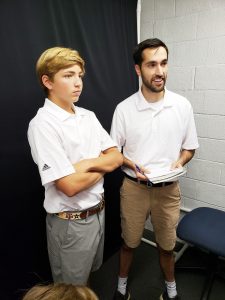 It was Michelle Feistritzer who reached out to Overing about being the color commentator for some of the games, harkening back to an earlier conversation they had had.

“When coach Fei asked me she was like ‘I know in the past we’ve had a discussion’ — coach Fei and I’ve talked about how I enjoyed working as the sports editor because I enjoy being around the kids. I could see myself being in a teaching role and that sort of thing,” he said. “So she brought that up and that’s what makes me want to do it. I like being able to give back and say this is an opportunity these kids haven’t had in quite a while.

“I really want to thank them for thinking of me because they really could’ve gone to someone else first,” he added with a laugh. “I’m just really appreciative that they wanted me to help them in the booth and get this thing rolling. For an inaugural broadcast and you ask me, that’s really humbling to say the least.”

While Overing will not be available to do every home game, the BCSN team does want to try to get him in the booth as much as possible.

“The plan is to get Matt as many times as we can,” Little said. “I really loved working with Matt. He always had the right thing to say it seemed. When I was talking, he was able to follow up with something that was perfectly related. He wouldn’t interrupt me. It was just a great partnership and I loved it.”

This week, Little will not be able to do play-by-play and will be replaced in the booth by Grant Hotchkiss. While his role is normally in setting up the booth and behind the scenes things, he has no problem filling in when needed.

“I got involved whenever coach Fei got involved. We were more going to do it on Twitter — Big Rebel Nation. Then our banking class got involved because we painted the room,” he said. “We helped get it set up, getting the tables measured and everything. Now I’m filling in for Jack for one week. Just doing my part a little bit — doing my part.”

But Hotchkiss doesn’t have aspirations of calling games in his future.

“Broadcasting isn’t something in my spectrum. I prefer taking pictures and doing Twitter. When Jack’s back, I’ll leave that to him and get back to my normal role.”

Hotchkiss was also a member of the Rebel football team for his first three years in school before an injury prematurely ended his career. He believes that familiarity with the players and scheme will be an asset in the booth.

As the operation grows, and more people tune in, it will give BCSN a chance to get more people involved. This week, Farmers National Bank is sponsoring the broadcast and will run commercials during the game. Those commercials — like everything else BCSN — will be student led. The school’s drama program shot, starred in, and edited the video for the ads that will air.

“We’ve got interest from Larry Vaught. He’s shown interest. He might be on the broadcast Friday night getting Chuck Smith at half time,” McQuerry said.

The team has also reached out to former NFL tight end and Boyle County alumnus Jacob Tamme about a possible appearance in the booth, and while he was not available for the CAL game, he is still a high priority for them.

“That’s what’s great about it is that once people see the success you’ve had they want to be a part of that success,” Overing said. “Obviously Larry Vaught and Jacob Tamme are two really big names in Boyle County and in the state — statewide recognition. They give those kids a chance to interview celebrities.

“To be a part of it and to give the kids the opportunity is really awesome. I think that’s the ultimate goal of it is to give these kids opportunities and a platform to do things. They’re learning how to do it in a professional way which is something they haven’t had in the past.”

“When something is going good, people like to attach themselves to it. But I’d rather see that than it be a sinking ship,” McQuerry added. “Grant is part of the (Big Rebel Nation) news class and he’s shown interest and now he’s doing one of the biggest games of the year. It’s very important if you want — we’re all for people coming to help because we need it.”

As producer, McQuerry also said that the added features of the broadcast — like an on the field interview — does make his job more difficult but is ultimately worth it to add a fuller fan experience.

One of the big challenges in starting up the streaming network was the fear that it would pull fans away from attending the game in person, opting instead to watch the game from the comfort of their homes.

“We realized that the fans who are coming to the games are going to come to the games no matter what. So we’re not going to take people away,” McQuerry added. “It’s just getting the people who want to come to the games but a can’t a chance to watch them. We have a lot of people — say over here at Ephraim McDowell the nursing home — that are Boyle County alum that want to watch the Rebels play football but of course in that situation who can’t.”

With the program being so young, the current crop of people involved are people who have an interest in sports broadcasting but not a passion. Jack Little hasn’t thought about it as a practical career, but thinks that this could open a door for him to get in the business.

“I love sports broadcasting. It’s hard to get into stuff like this but this is a great opportunity. If I get into it, I’d love to do it,” he said. “I absolutely love sports. Especially when I was little, I knew every stat for every player. College football, college basketball — I was just that kid. I loved it.”

“Man should Jack Little look into this. His talents are abundant for broadcasting,” McQuerry said about the freshman play-by-play man. “He’s so good. If you listen to our first two broadcasts you’ll realize why he needs to do this for a career.”

Matt Overing believes that having the experience of four years calling high level high school sports will be extremely beneficial to Little, but also will have benefits for every student involved in the broadcast.

“The experience that (Little will) have — I mean he’ll have clips — so by the time he’s a freshman in college, his resume will be filled with opportunities that other people haven’t had. Those clips he’ll be able to put on his resume and will really give him a leg up. He’ll be able to get an internship right out of high school I think,” he said. “Not just him, the kids doing camera work and production behind the scenes. They’re doing interviews in the hallways with students. That stuff’s really cool and I can see how this could grow into something more than what it is and is giving kids real world experience which is always great.”

While the operation right now is exclusively football games, they have already tested out soccer broadcasts and have plans to move to all sports across the school.

“We want to take it to all Boyle County sports. We’ve done a couple of soccer games as practice and next year would be a great opportunity to go,” McQuerry said. “If you’ve got Jack — he plays soccer and is a great broadcaster for girls soccer games. We’d like to do it with basketball and baseball and volleyball. People love to watch sports and this would be a great way for them to do it. Just because football season is over doesn’t mean BCSN is over.”