DOT: No bike lanes for Main 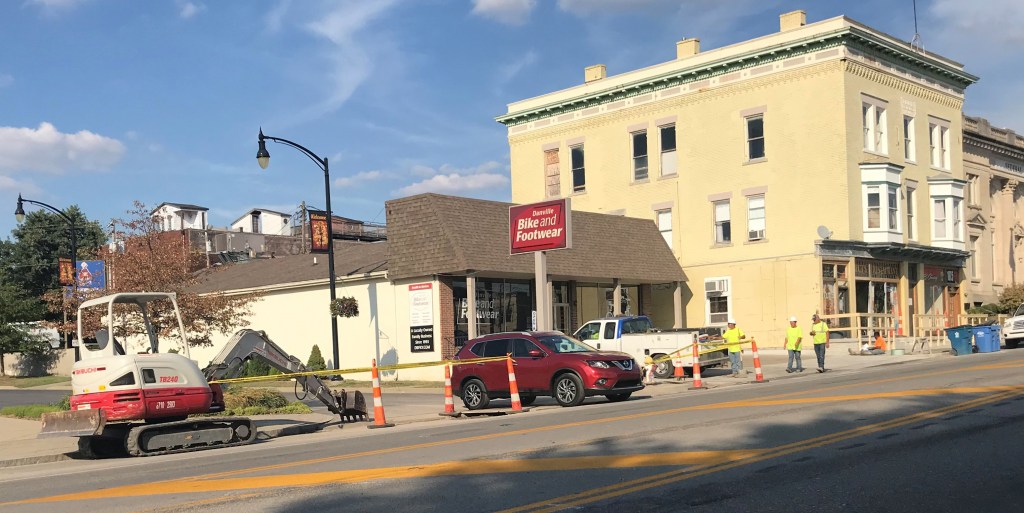 The Kentucky Department of Transportation has decided bike lanes will not be included in the permanent redesign of Danville’s Main Street. A release from District 7 says it “has decided to move forward to permanently implement the lane reallocation proposal.”

The release was sent out Thursday morning that the work would begin that night. But it makes no mention of bike lanes.

When asked what went into determining bike lanes would not be included, Natasha Lacy, spokesperson for District 7, said, “After evaluating all received public input and safety enhancements unique to each alternative, it was determined that the lane configuration with a wider center lane refuge area, wider street parking, and offset left turning lanes was the appropriate layout at this time.”

Alternating lane closures will begin with U.S. 127/Main Street/Maple Avenue and progress to the remaining routes. The work is planned to be done from 7 p.m. to 6 a.m. on weekdays, and is expected to be completed by Nov. 15.

“Input from the public was reviewed and evaluated carefully with regard to the changes for downtown Danville,” according to the release. “The modifications will include a street width that can be utilized for wider parking spaces, a larger median and the opportunity to offset left-turn lanes. The new configuration will provide improved safety for motorists and pedestrians.”

City Engineer John Cassel says Thursday’s email is the first official word from the district about when the work would begin. District 7 emailed the release the day the work is set to start “… because we wanted to ensure that the contractor did not have to change the start date for the milling,” Lacy said.

Perros said Kelly Baker, who is chief district engineer, made him aware of the decision on Sept. 12. “Kelly did come down and speak with me and indicated what the outcome of their decision was,” he said.

Hunt confirmed he was also made aware late last week. He said Baker said there has been some data released “that shows there are mixed reviews about the degree of safety bike lanes give to bike riders,” especially when it leads to less road width.

Hunt said he’s talked to many people in the area over the testing period. “Some would say bike lanes would be OK, but that they just like the lane reduction — that’s the biggest thing I heard.”

Hunt said others said they couldn’t give an opinion about adding bike lanes, because they were not included in the test period. “They said if there’s something different than the test, we can’t give you a full response because we didn’t get to see the width changes.”

Hunt said according to some survey data out there, “it said about 48% of the respondents said they wanted bike lanes, 52% said they didn’t care. If there truly is about 30,000 people in the county …”

A survey was conducted by the Heart of Danville, as well as one by Danville-Boyle County Chamber of Commerce. The Heart’s survey had 70 participants, and the Chamber had 65.

The survey questions were the same, including how they felt about the inclusion of bike lanes, and responses were very similar. Results from the Chamber showed 44.6% were in favor; 20% were opposed; 29.6% were undecided; and 6.2% needed more information.

Comments from participants in support of adding the bike lanes ranged from, “Why wouldn’t we have bike lanes? It’s 2019;” to “Danville needs to change its paradigm, and try to change the culture that we have currently. That means supporting progressive ideas like bike lanes, because that is what YOUNG people like in cities.”

Comments from those opposed ranged from, “Normally, I’m all for bike lanes, but on Main Street Danville, there’s a lot to consider; safety, narrowing driverlanes, too busy for bikers, etc.;” to “I rarely see any bike riders in the existing lanes out on South Fourth Street. I doubt many bike riders would be coming into downtown Danville very often.”

A temporary test period of the new Main Street lane reconfiguration — which changed it from four to two lanes, with dedicated turn lanes and turn signals — began on Aug. 1 and lasted for six weeks. District 7 held three meetings during the test period: one for downtown business owners to offer input; one for local officials; and one for the general public, at which the state asked people to submit comments.

The public meeting was held on Sept. 5, and comments were due back in five business days to District 7, by Sept. 12, with the decision anticipated to be made two business days later, on Sept. 16.

Cassel says after a short hiatus, Bluegrass Contracting has returned to complete work on the north side of Main Street, from Fourth Street to Danville City Hall.

The city has contracted with Bluegrass to construct a new curb, sidewalks, street lighting, landscaping and other needs on the block of West Main Street between Fourth and Fifth, as part of the city’s streetscape project.

“They have partially restored the pavement at the entrance to city hall and will be completing final work in front of Tut’s and the radio station, as well as across from Speedway near Fifth Street,” he said. Crews are also starting on the “punch list” work on both sides of Main Street, Cassel said, referring to the listing of things the contractor must complete in order to satisfy the contract specifications.

Cassel said Lawhorn Electric has begun installing the new light posts, and Bluegrass Contracting hopes to finish all major work within the next few weeks. “The project is almost complete, so we ask pedestrians and motorists to continue using caution in the area as they pass through,” Cassel said.