Banned Books Week focuses on censorship, having the freedom to read 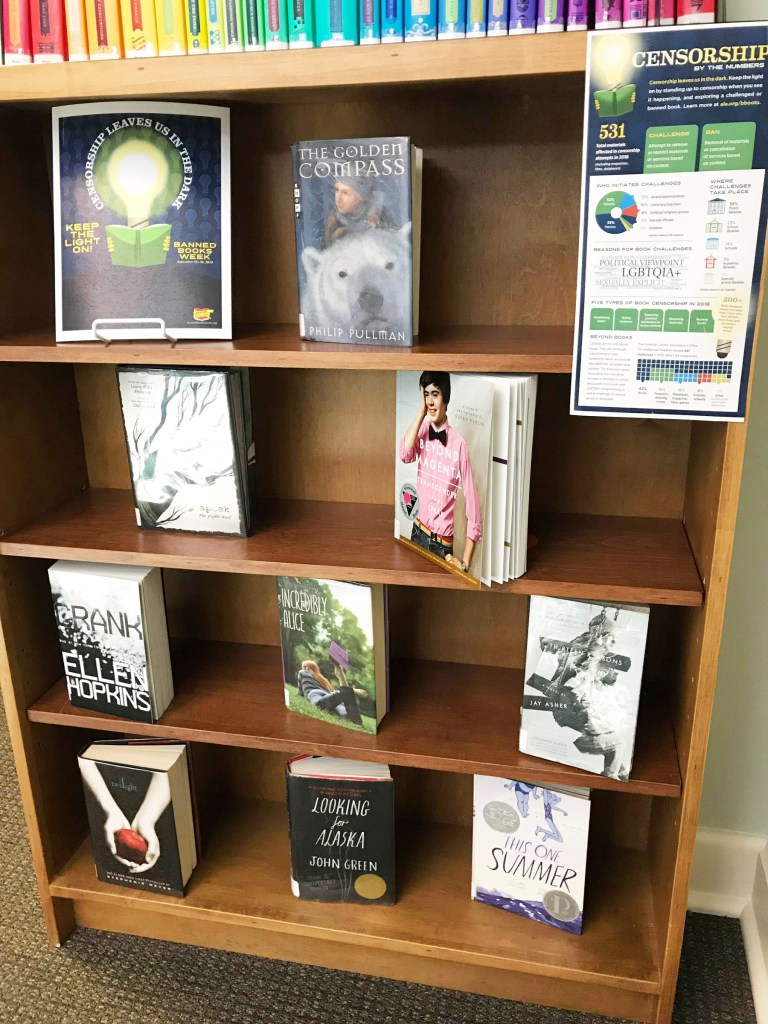 Part of the Banned Books Week celebration at Boyle County Public Library includes a display of books reported as challenged or banned in the U.S. since their publication. The American Library Association's theme for this year is “Censorship Leaves Us in the Dark. Keep the Lights On.” Banned Books Week was started back in 1982, when a record number of books were being challenged or banned in the U.S. (Photo by Kinsey Hisle)

Every year the American Library Association Office for Intellectual Freedom celebrates Banned Books Week with libraries across the country.

This year during Banned Books Week, the Boyle County Public Library is participating with book displays, flyers and free postcards and coloring pages to be given out during the week of Sept. 22-28.

Patrons can also find scrolling collections of historically challenged or banned books on the library’s website. The ALA theme for this year is “Censorship Leaves Us in the Dark. Keep the Lights On.” 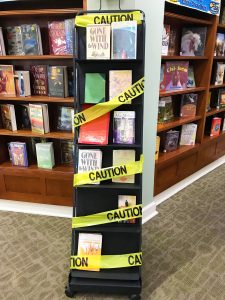 Banned Books Week was started back in 1982, when a record number of books were being challenged or banned in the U.S. The ALA now hosts the week as an opportunity for libraries to highlight books in their collections and discuss the topic of censorship in the form of challenging and banning books.

The ALA defines a challenge as an attempt to remove or restrict materials, based upon the objections of a person or group, and banning is defined as the removal of those materials.

The ALA explains Banned Books Week as a week that “spotlights current and historical attempts to censor books in libraries and schools. It brings together the entire book community — librarians, booksellers, publishers, journalists, teachers and readers of all types — in shared support of the freedom to seek and to express ideas, even those some consider unorthodox or unpopular.”

Young Adult Services Librarian Brittany Smith says, “Banned Books Week is important to celebrate because it highlights the ways in which books and information can be kept from readers. When we begin to allow materials to be removed because of content that some people find unworthy, we change the overall message that we are sending with our collection.”

BCPL has three displays during Banned Books Week this year featuring books the OIF has reported as challenged or banned in the U.S. since their publication. The displays in the children’s department features picture books and chapter books, including books by Maurice Sendak, E.B. White and Shel Silverstein.

There is also a display in the young adult fiction collection of YA books by authors including Angie Thomas, John Green and Jay Asher. In the lobby, there is a display of adult fiction books that includes books written by Ray Bradbury, George Orwell and Harper Lee.

Library Director Georgia de Araujo says, “Actually seeing the books that generate so much passion, fervor, support and opposition brings perspective. The same book that one person takes as terrible in some way is a beacon to someone else. The end result is not going to be that everyone thinks every book is great.”

The ALA releases a top ten List of banned books within the “State of America’s Libraries Report” each April, which BCPL uses to make the book displays. BCPL will be sharing the ALA’s infographics on its Facebook page during the week that give information on why the books were challenged or banned, where these instances occurred and more. According to the OIF, the most frequent reasons given for challenging or banning books are “the material was considered to be ‘sexually explicit,’ the material contained ‘offensive language,’ and the materials was ‘unsuited to any age group.’”

The ALA explains, “Books usually are challenged with the best intentions — to protect others, frequently children, from difficult ideas and information. Censorship can be subtle, almost imperceptible, as well as blatant and overt, but, nonetheless, harmful.” The ALA further states, “Censorship by librarians of constitutionally protected speech, whether for protection or for any other reason, violates the First Amendment.”

Smith says the most challenged materials are those with LGBTQ+ content. “If we were to remove these materials from our collection, then we would be sending the message that LGBTQ+ literature (and people) are unimportant or not valued. This fundamentally goes against what libraries stand for, which is that everyone gets a seat at the table.”

The Boyle County Public Library adheres to its official collection development policy for purchasing and maintaining materials, which includes the ALA’s Bill of Rights. If a patron wants to challenge any materials, librarians will give them a challenge form to complete, which will then be reviewed by the acquisitions librarian who purchased the materials, the library director and the board of trustees.

According to the ALA, “librarians and governing bodies should maintain that parents — and only parents — have the right and the responsibility to restrict the access of their children, and only their children — to library resources.”

de Araujo further explains, “This is where the idea of ‘freedom to read’ requires a lot of hard work. Rights and responsibilities go hand in hand. Libraries tend to have well-thought-out policies that describe how we go about collection development. While we provide a collection that serves our community, we believe a parent has the right and responsibility to guide their own child in this process.”

For more information on Banned Books Week, visit the ALA website, bannedbooksweek.org. To report censorship to the ALA, go to the resource page and complete their form at ala.org/tools/challengesupport/report.