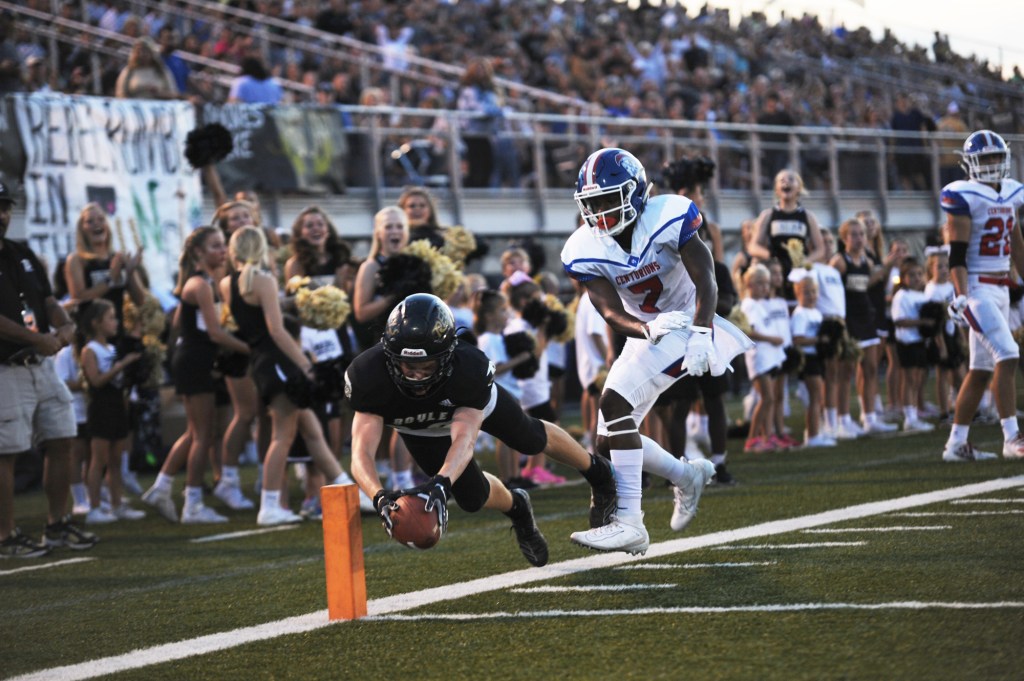 Coleman Clark dives for the pylon to score the first TD of the 71-28 win over CAL. (Photo Derek Brightwell)

In what was hyped up all week as the battle between two powerhouse teams in the state and the first time Boyle County would be really tested as a team the Rebels (5-0) answered the call to the tune of a 71-28 bludgeoning of Christian Academy of Louisville (3-2).

“These guys are really preparing like champions,” Boyle coach Chuck Smith said about his team. “They’re doing a great job of Monday through Friday working in practicing, focusing and concentrating and taking care of business and it’s really paying off for them on Friday nights.”

Offensively, the Rebels seemed unstoppable, scoring on all but one of their first half drives and running the ball at will. And that is without star running back Landen Bartleson, who went down with a hamstring injury in the first drive of the game. Andrew Sacco (112 yards and three TDs on 12 carries) and Will McDaniel (121 yards on nine carries) led the way in the backfield for Boyle County. 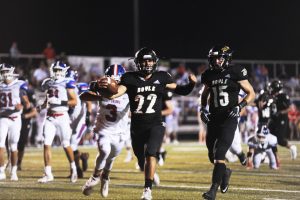 “I’ve been saying all year long we’ve got three really good running backs and we don’t miss a beat with any of the three. It proved it tonight,” coach Smith said. “Those two came right in tonight and picked up right where Landen left off. They had a great night.

“I think coach Chris Pardue — all the guys on offense did a great job of scheming and preparing,” he added. “They had it right on point to the very ‘T’ and they made a lot of good adjustments during the game to really allow us to run the ball as easily as we did. Really pleased with those guys, they did a great job.”

In the passing game, completed 11 of his 13 attempts for 245 yards and five touchdowns.Three of those scores went to Reese Smith and were — as usual — of the big play variety with two going for 51 yards and one going for 65.

The game started out looking like it would live up to the hype when CAL built a nice drive to open the game before being stalled out on third down. When the Rebels got the ball back, the first snap was delayed with a false start on attempted motion — a problem that reared its head for the Rebels multiple times in the game.

“We had way too many penalties tonight all together,” Smith said. “We haven’t really used a lot of motion this year — this was really the first time we’ve used motion — obviously we had a lot of penalties with it and we’ve got to get better at that in practice.”

But eventually the Reed Lanter connected with Reese Smith for 28 yard completion to cross midfield and give the Rebels a first down. The drive culminated in a 22 yard TD pass to Coleman Clark to give the Rebels the lead.

After the Rebels defense stopped another promising looking drive for the Centurions, Lanter connected with Reese Smith for the first of his 51 yard TDs  as he broke away down the sideline and crossed the goal line with ease.

However, CAL answered back in a big was when William Parr caught a pass from Anthony Sabatino for a 68-yard score to close the gap to a single score. But big runs from Sacco and McDaniel built a drive that ended with Sacco getting in the end zone from 10 yards out.

That was a theme coach Smith noticed, but was not pleased with — defensive breakdowns — even though his offense picked them up each time. 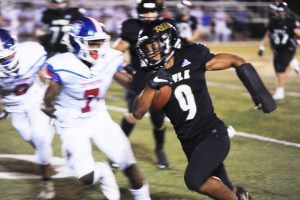 Reilley Colwick evades defenders on a sweep despite having his arm in a cast. (Photo Derek Brightwell)

“Every time we gave up an easy one — which we did a couple of times by mental breakdowns — our offense just came right back out and answered. We even answered on special teams again this week.”

That special teams score came in the way of a third quarter Gray Rahbany kickoff return TD, his second in as many weeks.

McDaniel continued his big day on the defensive side with an interception that led to Smith’s second TD of the game via the 65 yarder. Rahbany recovered the onside kick and the Rebels looked like they were going for the kill but couldn’t convert a fourth down pass to turn it over on downs.

On the next drive, they were able to strike another blow in the form of a 24 yard Sacco touchdown run in which he bounced off multiple would-be tacklers and crossed the field to get in the end zone. But CAL was again able to answer back, not letting the Rebels put them away just yet with a touchdown pass to Brandt Babin.

A short kick gave Boyle good field possession and the (Reed) Lanter to (Cole) Lanter connection made it 42-14 at the half. 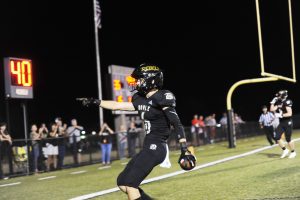 Cole Lanter points to the fans after scoring a TD. (Photo Derek Brightwell)

The second half started as bad as it could for the Rebels, after they failed to recover a regular kick that gave the Centurions the ball on the 16. And it didn’t take long for them to convert with a touchdown pass to Andrew Dupps. And again it didn’t take long for Boyle to answer back to that with the third pass to Smith, who bobbled it before reeling it in and sprinting away from the defense for a 51-yard score.

Sacco’s final run of the game was a 6-yard score in which he dragged multiple defenders into the end zone with him. The following two point conversion completion to Smith meant the game was over, as the clock started running.

Every win for Boyle County this year has come via the running clock, as the Rebels have been dominant all year. This was the first in a three week home stretch that will be the biggest tests for Chuck Smith’s squad all year. Next week the Rebels will welcome Highlands (4-1) and after that Lexington Catholic (3-2) will step into Rebel Stadium.

For now, though, Smith is only focusing on Highlands and that focus starts Saturday morning.