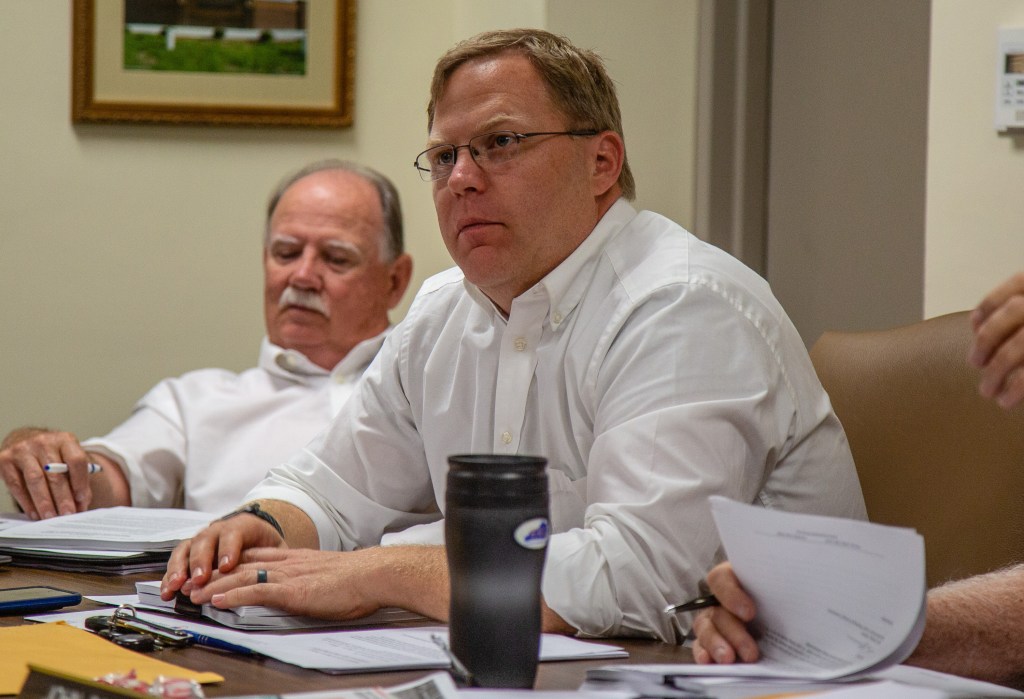 Boyle County Magistrate Jason Cullen said Tuesday that Danville City Commission's decision to repeal a joint parks ordinance without much warning to the county makes it difficult to trust the city. (Photo by Ben Kleppinger)

Danville’s decision to end its parks partnership with Boyle County and create its own internal parks and recreation department did not sit well with multiple county magistrates Tuesday morning.

The move came essentially without warning and confirmed fears that the city could not be trusted, Magistrate Jason Cullen said.

Cullen said Danville has proposed the city take over management of the parks multiple times. But the city commission’s move Monday night came as a “slap in the face” and “it’s kind of hard to put some trust in that entity when they’ll go rogue,” he said.

Cullen, who described the city’s action as a “parks takeover,” said the news of what Danville was planning didn’t reach him until Tuesday, after the city had already moved forward with repealing the joint ordinance that created the Danville-Boyle County Parks & Recreation agency and passed a first reading of a new ordinance that would establish a city parks and recreation department that reports directly to Danville’s city manager.

Cullen said the city commissioners’ actions amount to them saying, “We’re going to take our ball and we’re going to leave,” even as county officials maintain an interest in developing a new joint arrangement for parks.

Magistrates Tom Ellis and John Caywood attended Monday night’s city commission meeting; and according to City Manager Ron Scott, Caywood and Boyle County Judge-Executive Howard Hunt were told about the city’s plans over lunch on Monday. But news of what was planned and what happened didn’t spread much further than that.

“This is news to me,” Magistrate Jamey Gay said. “I did not know that this was happening or had happened last night until basically just now.” 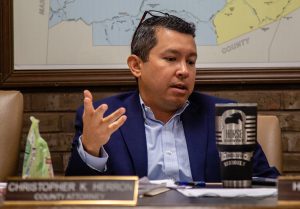 Chris Herron said Tuesday he wasn’t made aware the City of Danville planned to repeal a joint parks ordinance before it happened Monday. (Photo by Ben Kleppinger)

Gay said he would like to see the city’s proposed ordinance “before I can weigh in much more.”

Magistrate Caywood also encouraged members of the fiscal court not to rush to action.

“Let’s read the document and not come to any conclusions until we’ve had a chance to be educated,” Caywood said.

Magistrate Ellis said the city and county have been working on parks and negotiating a new joint agreement for a long time and he would have expected the city to provide more communication with the county about its plans prior to taking such a substantial action. He said how things are being handled is “disconcerting” and expressed concern that the city manager alone would “be the authority soup-to-nuts on every single detail” under the city’s plan.

County Attorney Chris Herron said the city’s move “is news to me, as well.”

Herron sent a revised version of a joint parks agreement back to Danville on Aug. 13, he said.

“I thought I would get something back,” Herron said. “This surprises me because I’ve been waiting to hear back from them. … That just kind of flabbergasts me.”

Cullen asked current parks Director John Bell to comment on the situation before the fiscal court.

“The biggest thing that’s out there will be the reaction from the county and the fiscal court to (Danville’s vote),” Bell said. “Any statement that I would make is going to be contingent upon the stance of the county and their perceived actions moving forward.”

Bell said as things stand now, Danville is essentially planning to pull half of the joint parks agency’s funding away.

Bell said he hopes a financial solution can be found that best serves the community’s needs for parks and recreation.

“Beyond that, without knowing what lies ahead from the fiscal court and their desires, I can’t make a full statement,” Bell said.

Magistrates were quick to praise the work done by Bell during his four and a half months on the job. Magistrate Ellis made a motion to “recognize John Bell and give him our full support as the continuing director of our parks, regardless of the ultimate outcome.” The motion passed unanimously.