‘The jokes will stop at the door:’ Boyle magistrate apologizes again 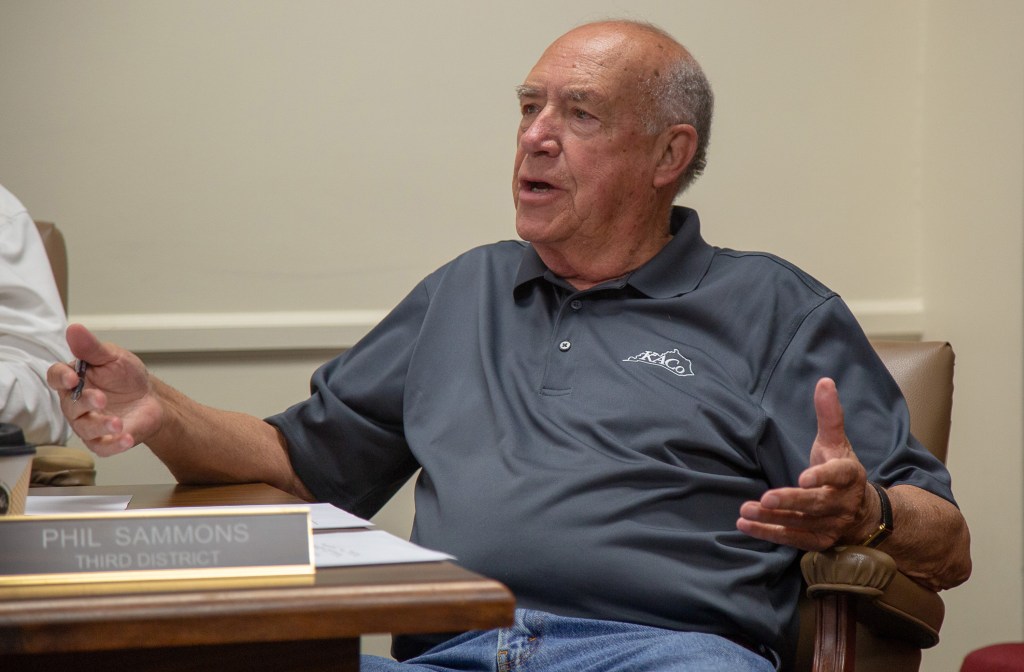 A Boyle County magistrate who made a joke about the local tourism director’s legs at a public meeting earlier this month said it was “a regrettable, stupid comment” and he intends to behave differently from now on.

“Last meeting, I made the most regrettable comment I’ve ever made in my life,” Magistrate Phil Sammons said during Tuesday’s Boyle County Fiscal Court meeting. “I’m very sorry for that. I’ll always hate that comment.”

“You’ll see a different magistrate out of me. The jokes will stop at the door. All I ask is the public’s accepting my apology and I deeply ask for your (acceptance of my) apology,” Sammons said to the other members of the court. “And I thank you, Judge(-Executive Howard Hunt) for giving me a chance.”

“I appreciate it,” Hunt responded.

During the fiscal court’s Sept. 10 meeting, Sammons had been making fun of Danville Mayor Mike Perros for not wearing socks. When Perros pointed out Kirchner wasn’t wearing socks either, Sammons commented that if Perros “had legs like that, he wouldn’t have to wear socks.” Multiple people in the room laughed at the comment.

“I’m a professional woman up here talking about tax rates, not to be objectified about my legs,” Kirchner responded.

Sammons newest apology came near the end of Tuesday’s fiscal court meeting. At the beginning of the meeting, Hunt announced in light of what happened at the previous meeting, he intended to keep discussions on-topic during fiscal court meetings going forward. And he said he expected a high level of professionalism from those on the court.

“This fiscal court, to include myself, will be known for how professionally it deals with situations that come before this court,” Hunt said. “We will be the epitome of decorum. We will ask pointed questions where we need information, but we will respect all those who come before this court in every way, shape or form. And I know this court unanimously agrees with those statements.”

Hunt said he will be using his gavel to keep order, and topics will only be discussed if there is first a motion and then a second to proceed.

“I don’t need to say anymore about that,” Hunt said. “But we are going to be known for being very professional in our exchange and dealings with the public and the business of the county — period.”

Monday night, during the Danville City Commission meeting, Mayor Mike Perros read an apology letter, in which he stated that, “As mayor … it is my responsibility to be a role model and leader regarding the type of behavior that is to be demonstrated in our community.”

Perros said he was wrong during the fiscal court meeting to “respond to a previous comment made to me.”

Perros read that he completely supports “the role of women being equals in any endeavor. We are past the days of accepting demeaning comments or actions aimed at others.”

The mayor said that the city commission’s adopted polices “demonstrate that our goal is to create and maintain a work environment free of unlawful discrimination and harassment.”

Perros said the city annually holds education and training for all employees, including mangerial and supervisory personnel, concerning discrimination, harrassment, sexual harassment and diversity, and that at the last one held in August, the city commission requested it also be provided the training.

“That training is scheduled to be provided to the Danville City Commission at the Inter-County Energy building on Oct. 16 … I will be there. I understand all of our city commissioners will be there. The fiscal court has also indicated they plan to attend.”

Perros said it is his hope that from the court incident, and with the scheduled training, “we will all develop a better understanding of what it means to provide equal treatment for all.”

Commissioner Kevin Caudill said although he hasn’t spoken to the rest of the commission about the incident, “I’m betting we would all agree that we didn’t condone your words or your actions. Diversity is an important part of this workplace.”

“Thank you for your apology,” Commissioner Denise Terry said. “I would like for everyone to remember that every elected official is still human.”

“Things do happen,” Commissioner J.H. Atkins said. “I put my foot in my mouth several times sitting in this place, in a public meeting. I appreciate the fact you are attempting to get out in front of this, making the apology to all of our employees … lessons learned.”