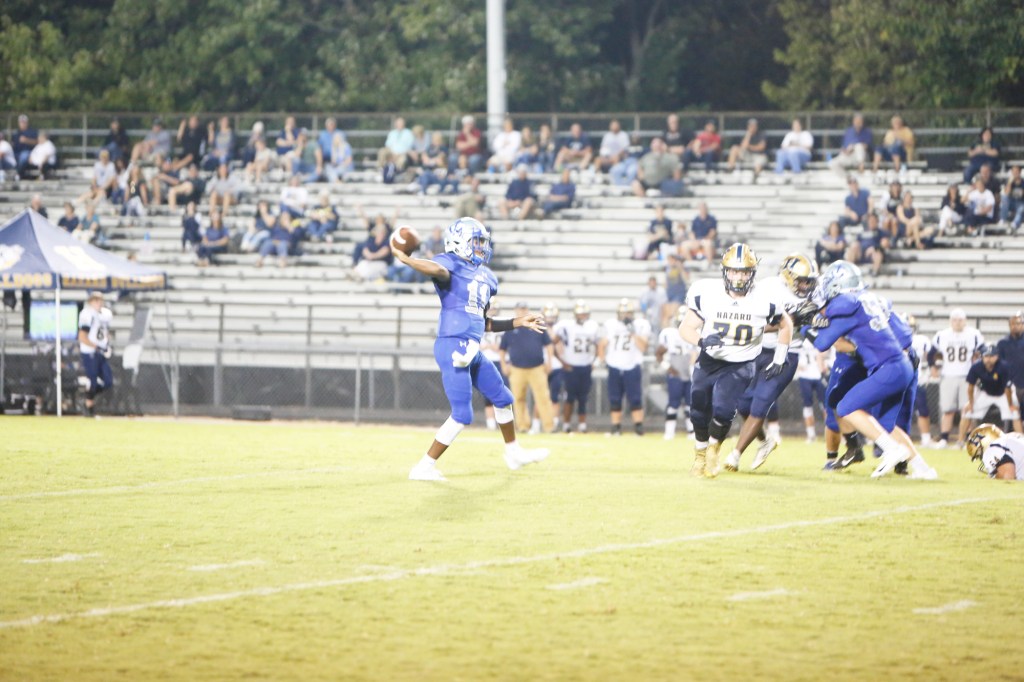 QB Sage Dawson completed four straight passes for 51 yards in a late drive to give Danville the lead against Hazard. (Photo Mike Marsee)

A week after a young Danville team watched a win slip through its grasp, coach Clay Clevenger’s team prepares to refocus and prepare for one of its toughest challenges remaining.

Wayne County didn’t enter the year ranked in 4A in the state, but after winning four of its first five to start the season, the Cardinals has cracked the top ten, currently sitting ninth in the AP poll.

“Coach (Shawn) Thompson does a really good job down there. He’s a guy that I’ve become pretty good friends with and worked with on occasion in a couple of all-star games,” Clevenger said. “You see the home games and the stadium is packed. You can just tell they’ve got a great atmosphere. I think they were in the state championship game in 2013. They’re always right there just knocking on the door in whatever class they’re in. They compete really hard and they play really hard.”

The Cardinals offense is led by Braedon Sloan. The junior running back leads 4A in yards per carry (12.8), rushing touchdowns (18) and total TDs (23). He also is third in rushing yards with 934 and 24th in receiving yards where he boasts 30.2 yards per catch.

“He’s probably going to be the best back we see this year. He’s just a very good high school running back. I don’t know if he’s gotten any offers yet, but he’s just a good football player,” Clevenger said. “He has a real knack for making plays. It seems like when you’re watching the film, when they need a play made they give him the football or get the ball to him in the passing game and he makes plays for them.”

Clevenger believes the most important thing for his defense when stopping Sloan is to gang tackling.

“We have to swarm the football. (He) does a really good job of breaking tackles — he has great balance,” he said. “If you think that one or two guys are going to bring him down throughout the night, then it’s going to be a really long night. We got to really get all 11 hats to the ball and do a good job of trying to box him in. 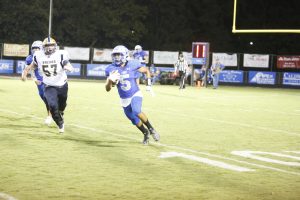 One of those receivers is Spencer Thomas who ranks 20th in 4A in receiving yards despite only having five receptions — three of which went for touchdowns.

On the defensive side of the ball, the Cardinals will look to give Danville’s freshman QB Sage Dawson fits with their blitz packages.

“They like to pressure you. They’re going to bring five guys at you most of the time, sometimes a sixth. But they’re going to try to come after you and get you out of your comfort zone,” Clevenger said. “They play the ends really wide and try to box you in and keep you from getting the edge really easy. It’s going to be important for us to be able to establish the run game.”

One of the biggest hurdles the Ads have faced this year has been a lack of depth because of injuries. Whenever Clevenger gets players back, he’s losing another one.

“The injury bug’s not doing us any favors right now. That’s just part of it,” he said. “It’s a year where you wish you had an open week right now, but we don’t — that doesn’t come until towards the end of the year. We just have to keep working to get better and hopefully as we get better and get some guys back, we’ll be able to put a little run together.”

Clevenger knows that Wayne County will come out fast, and said that withstanding that opening barrage is the biggest key to getting a much needed road win this week.

“They’re going to come out — their home atmosphere is something they really get keyed up on. So we’ve got to be able to withstand that initial surge that we’re going to get from them,” he said. “You watch them and their only loss they jumped out 14-0 on Pulaski and they kind of hit a little low. So you’ve got to be able to withstand that early bit of emotion and then settle into the game and make some plays.”