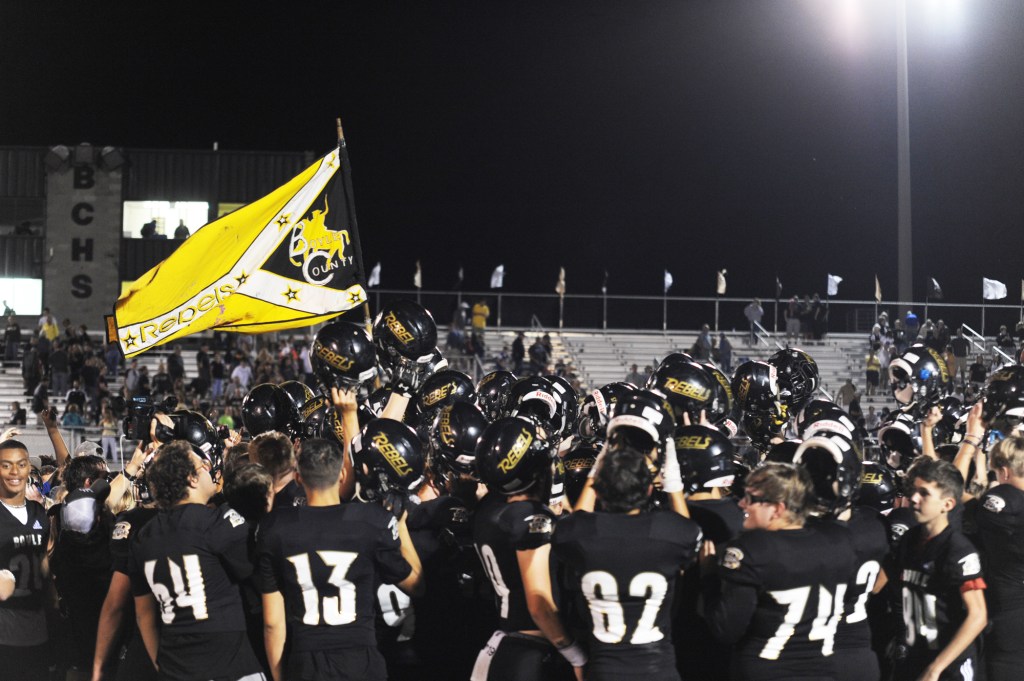 This was the week that was supposed to be the biggest test Chuck Smith’s team had faced all year. This was the team that Smith said had “probably the best defense” they’d see all year. The Highlands Bluebirds (4-2) lived up to that hype, but ultimately, the Rebels proved to be too good. For the first time this season, Boyle County (6-0) failed to get the running clock, but still won in convincing fashion, 30-0 over the No. 5 team in the state in the 5A division.

The first two drives of the game looked like the fans in Rebel Stadium were going to be in for a defensive struggle, with both teams going three and out. But Boyle’s second drive proved more successful. The Rebels earned their first 1st down via a Reed Lanter hard count to draw the Bluebirds offsides. Will McDaniel immediately followed that up with a first down run. A Lanter to Reese Smith connection set Boyle up first and goal and McDaniel cashed it in with a run to make it 7-0.

The Rebel defense proved to be the most dominant unit on the field all game, which was crucial as the Bluebirds defense executed its game plan as well as it could to slow down the explosive Boyle offense.

“Our defense played lights out. They did a great job. They were all over the field — flying around and making plays,” coach Smith said. “I thought the defensive secondary did a really nice job of covering. I also thought our defensive front did a nice job of controlling the run. We didn’t allow them to run the ball on us. That makes them one dimensional, which is really what you want in a game plan.”

“They played a great game. They bailed the offense out every time,” Reed Lanter said. “They didn’t have a lot of yards and they didn’t score a point. Whenever a defense is playing like that, you got a good chance of winning.”

The next Rebel drive looked like it was in trouble when they faced a third and 22, but Lanter connected with Gray Rahbany for 28 yard completion and a first drive and then with Reese Smith to put the Rebels in the red zone. However, the drive stalled there and the Rebels had to settle for a Jackson Smith field goal to get out to a 10-0 lead. 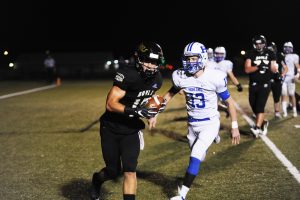 That would be the score at the half as the only other drive that threatened was a Highlands drive that ended in a Reese Smith interception in the end zone.

Coach Smith credits the Bluebirds defense for executing a game plan that focused in on stopping the big play capability and forcing someone other than Reese Smith to beat them. Smith ended the game with only three catches for 59 yards and no touchdowns.

“They took away some of the things we like to do. That was their game plan and it was a good game plan because it really slowed down our offense,” coach Smith said.

“Their defense was really good,” Lanter agreed. “They didn’t have many big guys playing on the line. They could run. We had a little bit of trouble when they were bringing people and our offensive line couldn’t stay with them.”

Ultimately though, in the second half, the Rebels showed a different side of their offense. With the big plays being taken away, Chuck Smith finally got to see his team sustain drives and finish them off — something he has been talking about all year.

“I think patient is a good word. Most teams — what we haven’t had to be this year is patient. We’ve had big play after big play after big play,” he said. “They came in and shut down our big plays. They double teamed Reese and made sure he wasn’t going to get open. Other teams are going to try that same game plan against us and I’m proud of how our kids responded tonight.” 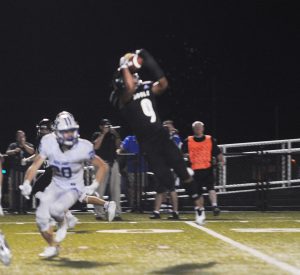 Reiley Colwick hauls in a 34-yard touchdown, despite his hand being in a cast. (Photo Derek Brightwell)

In the second half, the Rebel defense immediately impacted the game, getting consecutive stops for a loss to give the offense good field position. However, for the second time of the night, the offense couldn’t put it away in the red zone and Jackson Smith kicked his second field goal to make it 13-0.

After the Bluebirds ran a reverse fake on the kick off to take it near midfield, they appeared to be challenging for the second time of the game. And just like the last time Highlands challenged the Rebel defense, Reese Smith got an end zone pick to shut it down. But the Rebels couldn’t get a drive going after that, and ended the third quarter facing another third and long.

Starting the fourth quarter, the defense bailed the offense out again with a three and out and the Highlands punter gave the offense an assist by shanking the ball out of bounds at the 34.

It didn’t take long for Boyle to make them pay when Lanter connected with Reiley Colwick — who still has one hand in a cast — for a score on the first play of the drive. Lanter then connected with Reese Smith for a 2-point conversion to make it 21-0.

Once again punting out of the shadow of their goalpost, the Bluebirds made another special teams miscue when the snap went over the punter’s head and out of the end zone for a safety.

The Rebels would take the ball and get that sustained drive coach Smith has been wanting to see that was capped off with a McDaniel TD run to make it the eventual final 30-0.

But the final play of the game was a representation of the game as a whole, Boyle’s defense swarming and Jacob Heist getting a sack as time ran out.

The Rebels didn’t have the big offensive numbers this week — Will McDaniel led the team in rushing yards with 78 and two TDs on 22 carries. Andrew Sacco added 33 yards on 15 carries. For the first time this year, the Rebels were without a 100 yard receiver or rusher, as Reese Smith led the way for Boyle. Reed Lanter completed only 15 of his 27 passing attempts for 179 and the one touchdown. However, with those yards, Lanter took over the school’s all-time leader in passing yards for a career, passing Jeff Duggins. 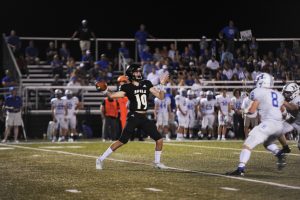 “It means a lot. Player-wise it just humbles me because you’ve had Brandon Smith, Jeff Duggins. You’ve had a lot of great quarterbacks that I’ve had to compete with,” Lanter said about the mark. “But I always want to be the best in everything that I do. Going into my freshman year I’ve set some goals for myself and this was one of them.”

“Reed has done a great job this year. He could always throw the ball, but what he’s done a great job of this is year is all those intangibles that it takes to be a great quarterback,” Chuck Smith said about his senior QB. “His leadership skills have really picked up. He’s more in control of the game. He’s made checks during the game this year that have put us into a better play. He’s having a great year right now and it’s not about him throwing the ball it’s about those intangibles… I thought he was in control — even that last drive when I don’t think we threw a pass but he was in control of our offense. That’s what’s made him really good this year.”

The Rebels are off next week as they prepare for a showdown with Lexington Catholic on Oct 11 at 7:30 p.m. at Rebel Stadium.