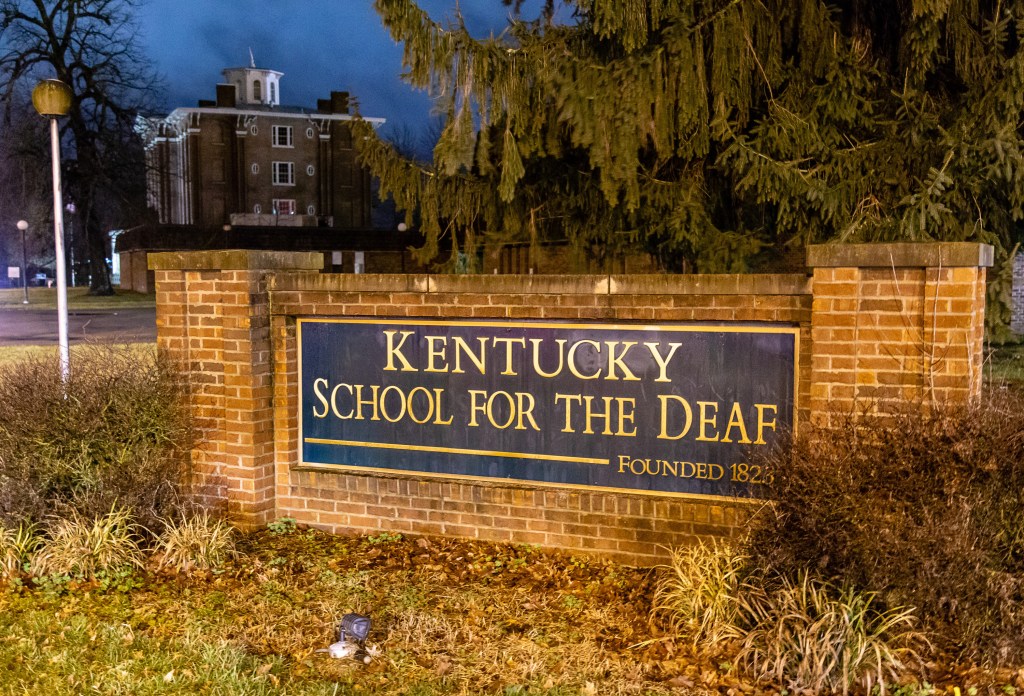 Kentucky School for the Deaf Principal Toyah Robey declined to comment directly about allegations about problems at her school during a phone interview Monday night. But she said she is committed to transparency and an “open-door” policy with parents and the community. And she said she has worked to increase the number of deaf leaders at the school dramatically.

“Since last spring … approximately 60% (of new hires) have been deaf,” she said.

When Robey began as principal in August 2017, about 20% of the school’s leadership positions were held by people who were deaf; now leadership is about 75% deaf, she said.

Robey said at the national level, she believes only about 22% of the staff at deaf schools are themselves deaf.

“We have a challenge of finding deaf that want to go into education,” she said. “I didn’t understand until last year, somebody pointed out we hadn’t had a deaf hire as a teacher since 2010.”

KSD also recently added a deaf assistant principal, Joe Obermaier, who worked previously in Chicago and at the Arizona School for the Deaf, Robey said.

“I would put my staff against anybody else in the commonwealth and they would just be phenomenal,” she said.

Robey said KSD has “challenges that other districts don’t face” since it is a residential school where many students live at during the school weeks.

“We always endeavor to tackle any problems as quicky and as transparently as possible,” she said.

Robey was criticized by Boyle County Magistrate Jason Cullen on Friday, when Cullen had the opportunity to speak with Kentucky Gov. Matt Bevin during a visit to Danville.

Cullen told Bevin he had removed his deaf son from the school because of concerns over conditions in the facilities and the culture created by the leadership. He specifically noted Robey, who is hearing, did not know how to speak American Sign Language when she was hired.

Education Commissioner Wayne Lewis happened to be at KSD speaking with staff when Cullen was talking with Bevin; Lewis told The Advocate-Messenger Monday that Cullen’s “picture does not match in any way the school I spent Friday afternoon at.”

But Lewis also acknowledged there have been problems with both facilities and staff culture at KSD in the past. And he said he is aware of the desire from many to increase the number of deaf employees at the school, “and that makes complete sense to me.”

Robey said Monday night she wouldn’t speak directly to Cullen’s allegations. Asked about the people who have complaints about how KSD is being run, she said Cullen and “some of the parents you are referencing have my cell number.”

She said while there are people who have complaints, there are also people who have good things to say about how KSD is operating. She said a grandparent told her last week that “I cry every day when I leave this campus because my child has been here one month and she has learned more in one month here than she did in her previous district.”

Robey said since coming to KSD, she has been “immersing” herself in ASL in order to better communicate. All staff at KSD have to demonstrate growth in their ASL competency, including herself. She said she has reached a certain level of ASL competency within four years and “I’m right on track for that.”

“It’s awesome to be able to just immerse yourself in the language,” she said. “I’m very much about continuous improvement.”

Cullen criticized Education Commissioner Lewis Tuesday morning for failing to visit with the parents and community members who have concerns about KSD while he was in Danville.

“He was meeting with his staff, but chose not to meet with the many people from the community, alumni, teachers … to hear their issues, even though they’ve called his office, they’ve written him many times,” Cullen said. “He chose not to involve them and take a few minutes to kind of get their thoughts, which kind of really is upsetting.”

“I have to believe that the one area red tape has not been cut in is at KDE,” he said.

Cullen alleged that when Lewis visited KSD a month ago, “he was very hard on the staff because they are bringing things to light that’s making his department look bad.”

“This time around, he offered private meetings, but they really weren’t private because he insisted that the principal stay,” Cullen claimed. “So after what happened in the previous meetings where he really came down hard on the staff … along with the principal being there, nobody wanted to really take advantage of that. I think a few people did afterwards after they insisted or whatever.”

“Dr. Lewis had a collective meeting that included me initially and he offered to meet privately with staff at which I was not a part of as I returned to my office,” she said.

“This is supposed to be all about the kids,” Cullen said Tuesday morning. “… While I appreciate Commissioner Lewis coming down to check in on KSD, I would strongly disagree about him saying there’s been positive strides moving forward. I can tell you from firsthand experience, my staff is completely different when I walk in the front door vs. when I’m not there.”