One Day: Garrard athletic trainer committed to caring for athletes 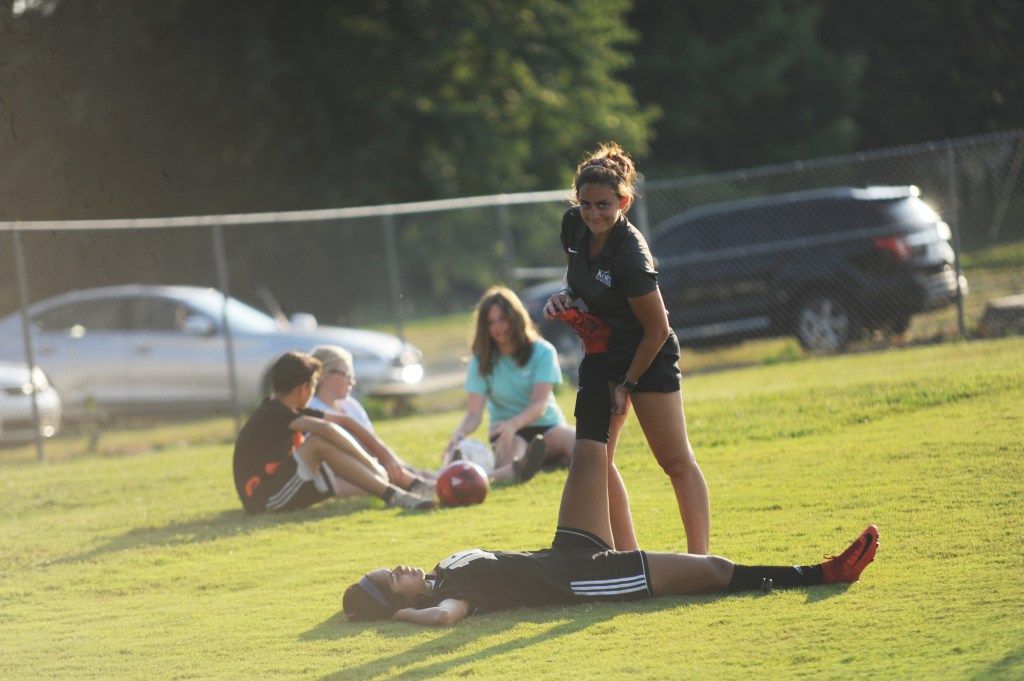 If everything goes well, you’ll never notice her. But for the worst moments in sports, Garrard County athletic trainer Jennifer Mason is ready for action.

Monday night’s 4-2 win over Lincoln County, when Marianna Cortes went down with a cramp on the far side of the field, Mason sprinted the length of the field to attend to the fallen star. In that instance, all she needed to do was help Cortes get up on her feet and stretch her leg out a little bit, but she’s ready if something more serious should arise.

“During a football game, it could be anything between ‘Jen, I ripped a scab off and need some blood wiped off,’ or an open compound fracture where I had a bone sticking through the skin,” she said about the range of injuries she’s seen this year. “I got my undergrad from EKU and I also got my master’s from EKU. I think both of those combined allow me to take any situation that I’m given medically and know how to handle it so I’m very thankful for it.”

Mason originally hails from Warwick, Rhode Island, and found her way to Kentucky for college. Originally going to school for nursing, she found athletic training was more in line with her interests. After working at a hospital as an orthotics specialist, Mason made the transition to a high school athletic trainer and is in her second year as the full-time trainer at Garrard. She has loved the career change. 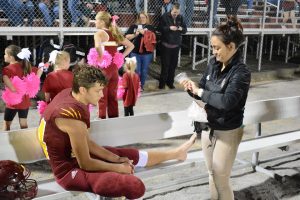 “When you’re in the hospital, you see your patients once or twice, usually never more than three times tops with whatever I was doing for them. I was usually doing more brace fitting and orthotics,” she said. “Here I like it a lot better because I get to know my patients and form relationships with them.”

However, those relationships make it hard for her to see a player go down. “I have a relationship with them and I don’t want to see them injured, but at the same time I am glad I’m here for them.”

As a licensed medical professional in the state of Kentucky, she can treat injuries on the spot, but when a more serious injury occurs and she knows she’s sending a player to the hospital, she switches gears to just keeping the player calm.

A typical day for Mason begins just before the school day ends, so if a player needs treatment and is free they can come see her. After that, she sets up for practices and whatever game is that night. For some sports, she also chips in by preparing the water and ice — anything to make sure her athletes have what they need to stay on the field.

Entering her second year, she feels that the coaches have gotten used to having her around. In her first year, she said the concept of having to let the athletic trainer know about a change of schedule was hard for coaches to adjust to. She says she’s thankful, though, that the teams’ coaching staffs have been receptive to her advice when it comes to player safety.

“That’s something that I’m really lucky for because there’s a lot of athletic trainers who have coaches not listen to them or go behind their back and Garrard County hasn’t done that to me and I’m thankful for that.”

Of course, she says, some players will try to lie their way back on the field.

“Oh no, they do that because they want to play. But I think that’s another benefit of having an athletic trainer full time at the school,” she said, laughing. “There’s some of my athletes that are very good liars and who will tell me it’s fine and they can play but because I have a relationship with them outside of that injury, I know that they’re not.”