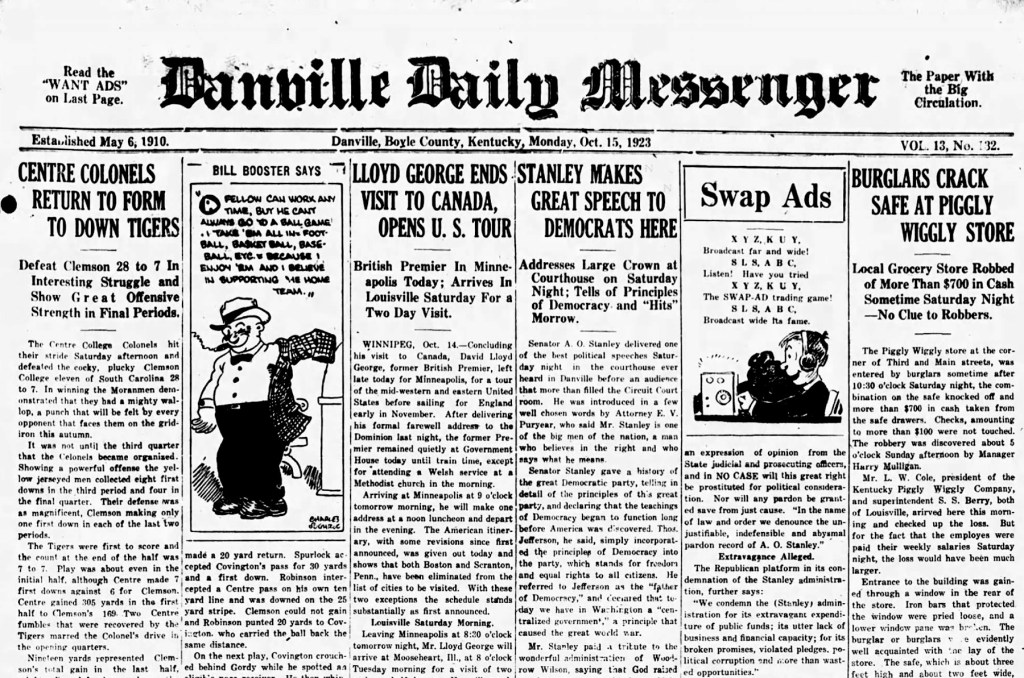 The Clemson Tigers are one of the most feared football teams in college these days. They crushed Alabama 44-16 to claim the national championship last year, and they are 6-0 and ranked No. 3 in the nation this year.

But 96 years ago, it was the Centre College Colonels who were dominating the Tigers from South Carolina. The front page of the Oct. 15, 1923, Danville Daily Messenger led with a story about the Colonels beating Clemson 28-7.

Centre faced a “cocky, plucky” Clemson team, but defeated them handily, proving “they had a mighty wallop, a punch that will be felt by every opponent that faces them on the gridiron this autumn,” according to the story.

“It was not until the third quarter that the Colonels became organized. Showing a powerful offense, the yellow-jerseyed men collected eight first downs in the third period and four in the final quarter,” the story reads. “Their defense was as magnificent, Clemson making only one first down in each of the last two periods.”

The game was tied 7-7 at the half before Centre tore it wide open.

“The first half was nerve wrecking for Centre fans,” according to the story. “They never knew what to expect next. Clemson had a queer formation that it employed throughout the game. Before each play, the entire team would hover around the quarterback like a lot of chickens getting under the wings of Mother Hen. The quarterback would call the signals and just before the starting number, the purple-clad men jumped to their places.

“This formation was probably designed to pull the opposing team offside. Only once, however, did the Colonels fall for the play.”

Centre had two interceptions and lost two fumbles in the first half, which severely limited the damage done by the Colonels’ 305 yards of first-half offense. But then, backed up at their own 5-yard line, the quarterback “took a desperate chance” and completed a pass from his own end zone to a receiver at the 19-yard line.

“It was the turning point for Centre as three first downs were made in five plays,” the story reads.