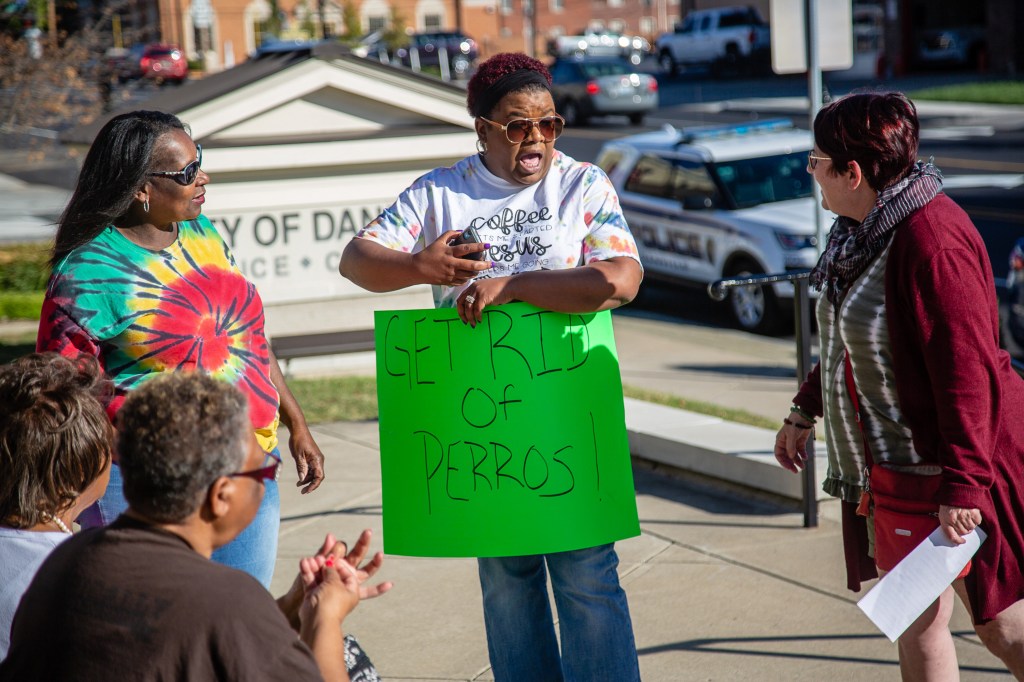 “We’re not as tightly organized yet as we plan to be, because we just met for the first time last week,” said Elaine Wilson-Reddy, one of those who showed up around 4:30 p.m. Monday to hold protest signs while a special called meeting of the city commission was going on inside. “… It’s not as cohesive yet as we’d like.” 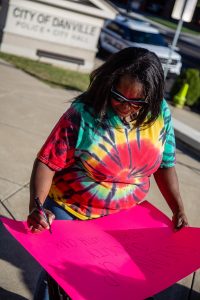 Protester Yanna Walker creates a sign that reads, “Clean up our city start with our leaders.” (Photo by Ben Kleppinger)

The group was about five strong, with others stopping by now and then to talk. Those protesting discussed “white male privilege” they said is rampant throughout Danville government. One protester was heard saying City Commissioner J.H. Atkins, who is African American, is “out of touch” with the local black community because he hasn’t more strongly condemned comments made by Perros to a city employee, Joyce Collins.

Collins filed a grievance earlier this year against Perros after he made a comment to a new city worker about Collins’ skin color and the fact she wore wigs when she was undergoing chemotherapy treatments.

Documents provided by the city to The Advocate-Messenger show Collins claims that in June, she was training a new employee as her replacement because she had taken a new position elsewhere in city hall. Collins wrote that when she introduced the new employee to Perros, the woman referred to herself as “the new Joyce.”

“The mayor’s comment was, ‘You can’t be the new Joyce because you don’t wear wigs,’ and I said how do you know this is not my hair, trying to play it off over the embarrassment,” Collins wrote in her grievance. “Then he said, ‘And your skin is not as dark as hers.'” 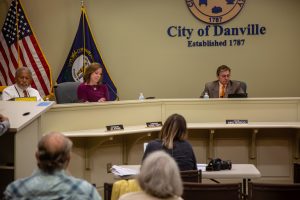 Danville Mayor Mike Perros, right, participates in a workshop meeting about a proposed zoning ordinance amendment Monday evening, while a handful of protesters called for him to step down outside city hall. (Photo by Ben Kleppinger)

The grievance resulted in the city planning diversity training for its elected officials, which is scheduled to occur this Thursday at the Inter-County Energy community room on Hustonville Road.

Glo Lewis, one of the protesters outside city hall Monday, said she doesn’t think Perros should continue to hold his office after what he said.

“If it had been a black man that said it … that day he would have had to leave city hall,” she said.

Protesters planned to speak about their demand that Perros resign during the city commission’s “hear the public” agenda item at Monday night’s regular commission meeting.

The special called meeting at 4 p.m. was unrelated to the protest; it was a workshop on a proposed amendment to the local zoning ordinance.

Watch for coverage of both of Monday night’s city commission meetings in The Advocate-Messenger and on amnews.com.