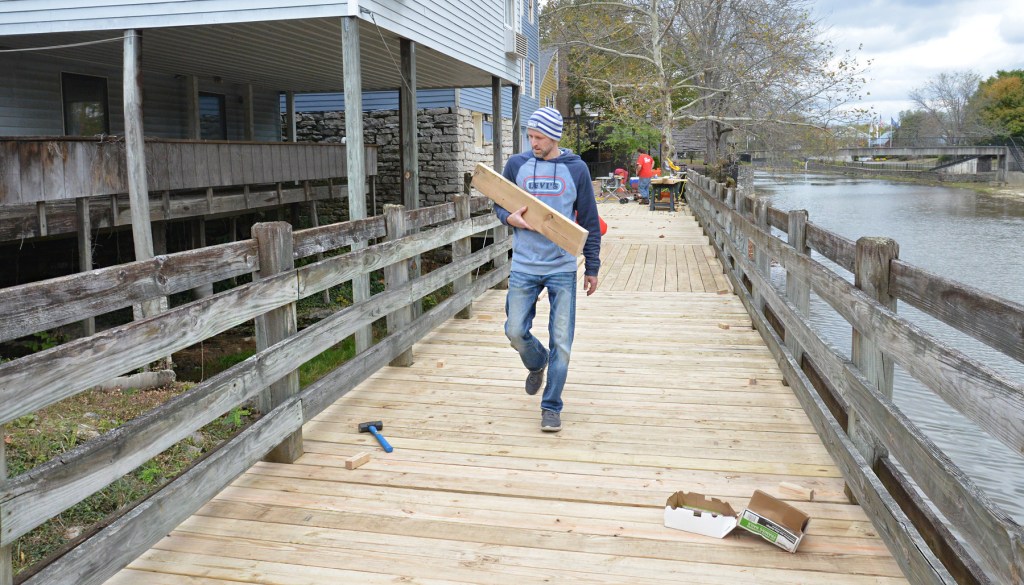 John Masters walks on the new boardwalk along Chaplin River at Perryville that he and other volunteers from Lowe’s of Danville have been replacing.

Lowe’s of Danville is a real life hero in the eyes of Perryville City Council and everyone who calls the small town home. 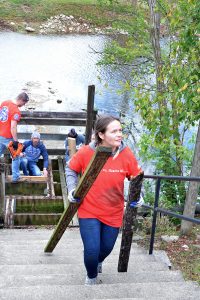 Faith Holliday, of Harrodsburg, carries an old, weathered board up from the Perryville boardwalk Wednesday.

The wooden boardwalk that parallels Chaplin River behind Merchants Row had fallen into disrepair and has been closed since July. So “heroes” from Lowe’s put on their bright red T-shirts and using the strength of about 20 employees and a generous donation from the company, replaced the entire decking of the bridge on Tuesday and Wednesday, at no cost to the city. 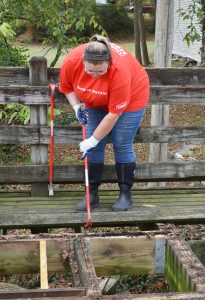 Abbey Worley pries loose an old board in Perryville.

Lowe’s Heroes is a company-wide program that gives its employees the opportunity to support local community improvement projects and make a lasting impact, according to its website.

Jesse Logue works at the Danville Lowe’s and was installing the decking Wednesday. He said they chose Perryville’s project because of the town’s historically significant to the area and is close ties to the Battle of Perryville.

John Masters who was also working on Wednesday said, “We don’t always want to be right. We just want to always do right,” and replacing the boardwalk for the town was the right thing to do. Not only will residents be able to safely stroll along the river, but tourists will be able to enjoy the scenery as well. 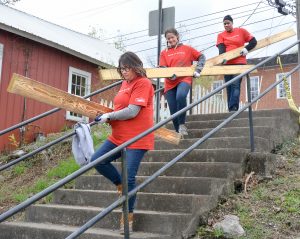 From left, Angela King, Faith Holliday and Ebony Alcorn carry new lumber down to the boardwalk that Lowe’s of Danville Heroes project was working on.

Perryville Mayor Brian Caldwell said the boardwalk is about 1,400 square feet. “It probably would have been $10,000 to $11,000 for labor and materials. We cannot thank Lowe’s enough for choosing our small town to do their Heroes project in.”

He said they are grateful for Lowe’s management team and volunteer employees who “dedicated their time and efforts to help us. We’re proud of them.” 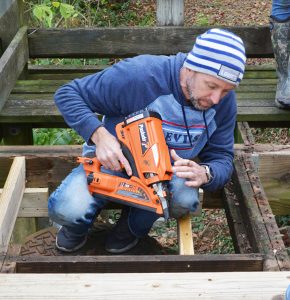