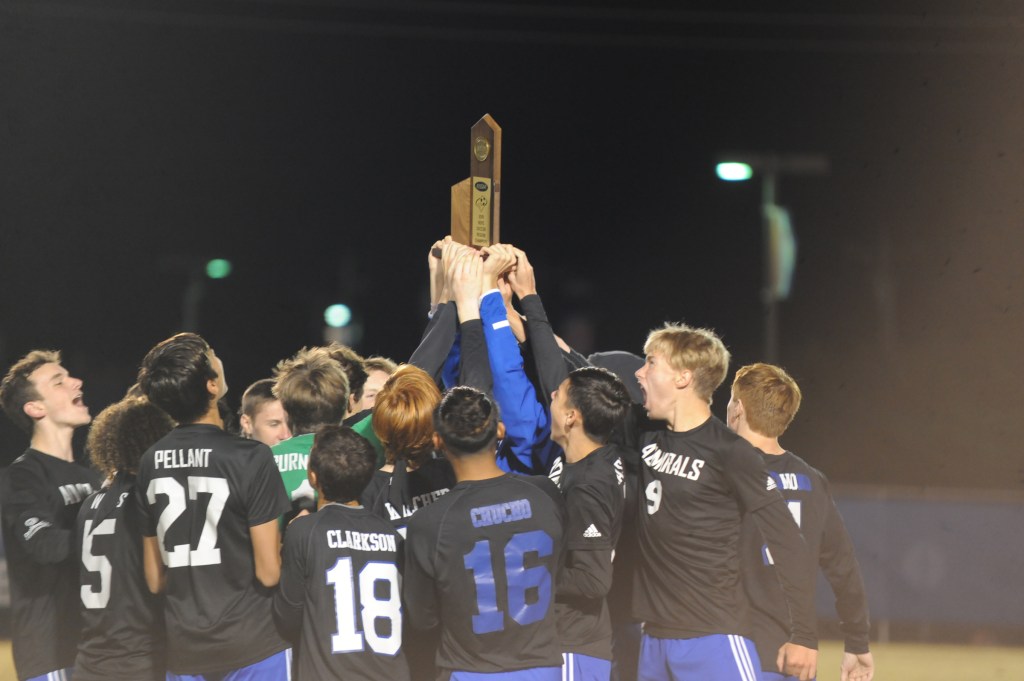 SOMERSET — The two heavyweights of the 12th region traded blows Thursday night in the regional final, and two halves weren’t enough to decide the winner. But Gabe Cisneros made sure that it didn’t take much longer than that when he put the golden goal in the net after only 1:20 had come off the clock in the first overtime period to get the win over West Jessamine and the 12th Region Championship.

“I just made sure the ball went on target,” Cisneros said about the shot. “It had a bit of deflection so I kind of got lucky on it.”

“With the tie, everyone’s nerves are on edge,” Briar Sanders said. “(Ethan Redmond) just getting it up there in the box and passing it to Gabe with him finishing it perfectly. Settled all the nerves.”

For Danville, it’s the first trip to the state tournament since 2011 when they were part of the 15th region.

“It’s great because — for our seniors — they came in on a little bit of an upswing and man they worked so hard for four years. Some of them I’ve had since they were in fifth grade and have such a great relationship,” head coach Brent Beauman said. “For them to end it with a regional championship is great.

“Everyone else on the team — I’ve won regional championships before but I’ve never had a team react this way. There was some real emotion. Some had tears of joy. They worked so hard and I think it showed what it means to them. I’ve appreciated their work all year and I think it shows.”

The first half was Danville’s. The ball was on the Admirals’ offensive half for most of the period, and the Ads had multiple looks at the net. Only one of those found the back, but it was a beautiful shot.

Sanders played the ball from about 50 yards out and saw West’s keeper Collin McKibben playing out of the net and so he fired the ball in and it just floated over McKibben’s hands and into the top right corner of the goal.

“It was just a good heads up play. He looked up and saw the keeper was out and just put it in there,” Beauman said. “Briar is a great player. His skill is phenomenal. His speed is crazy fast. But his vision — I mean you don’t become the assist leader without having great vision of the field. In games like this you take chances and that paid off for him.”

Sanders’ description was more succinct. “Saw the keeper out. Took a chance. Worked out.”

Sanders was all over the field in the first half and was in control for most of the period.

“I definitely didn’t want this one to be my last,” he said about his performance. “Last year we came up short, so we didn’t want a repeat. I had to give it my all.”

In the second half, the Colts came out more aggressive and it felt like they reversed the momentum. They also only converted one of their chances when AJ Kinnell took control of a ball that bounced around the box and put it in for the equalizer — and the only goal Danville has given up this postseason.

“They’re a very dynamic team and have tons of speed,” Beauman said about West. “AJ is so skillful and those other guys. We allowed one goal through district and region play. I knew it would be hard to get a shutout against them.”

With time expiring in regulation, Briyon Cortez got free down the right of the field and had an open look for the game winner, but fired it just over the crossbar as the horn sounded for overtime.

And Cisneros was able to make short work of the extra period.

“Gabe is a phenomenal player. He’s going to do what the team needs and what we ask him to do,” Beauman said. “That means sometimes the spotlight doesn’t fall on him, but if you know anything about soccer you’re going to notice Gabe quickly. His touch, his passing, his shooting. But his motor. He never stops moving. That’s huge in the game of soccer.”

The two teams had met earlier in the year, with the Colts taking that matchup 3-1.

“Neither one of us are the same team,” Beauman said. “You start the year with freshmen and by now they’re pretty much sophomores. West’s improved just like we have. It was good to show that all the hard work paid off.”

“When we first played them — second game of the season — we didn’t have our legs on us,” Sanders said. “Then with Sam (Brunner) getting hurt obviously messed our formatting up even more. They came up victorious there and we came up victorious when it mattered.”

The Admirals will host the first round of the state tournament against Covington Catholic who won the 9th region Thursday night.