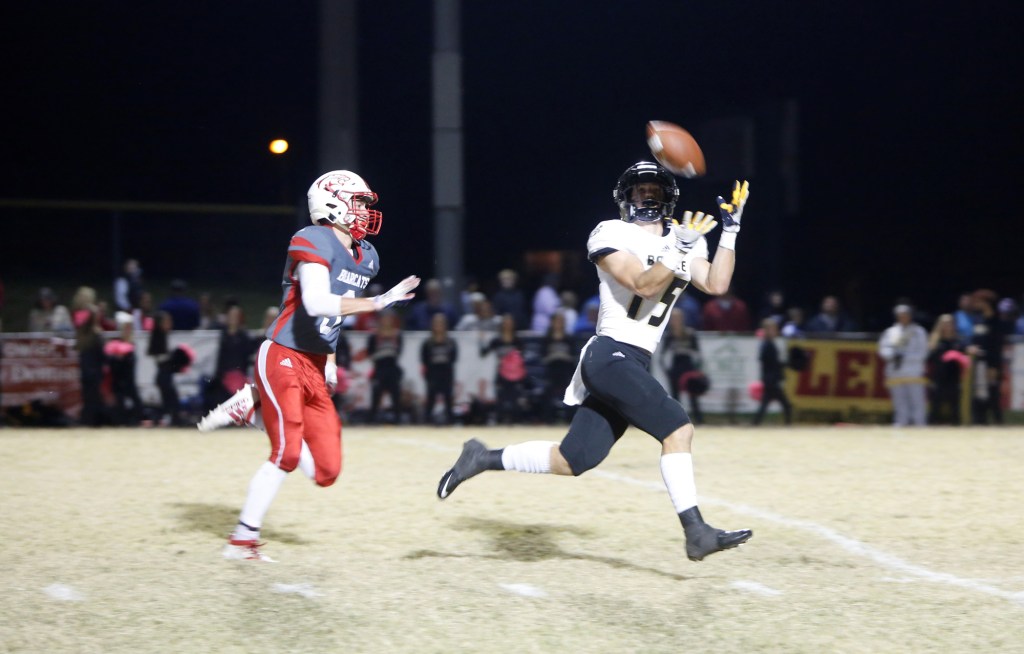 Reese Smith gets behind Anderson County’s Sam Harrod to catch a pass that became a 56-yard touchdown during the second quarter Friday. It was the second of three touchdowns for Smith. (Photo Mike Marsee)

He knows the state has a lot of talented high school senior football players but Boyle County coach Chuck Smith — who readily admits he’s biased — has no doubts about who should be Mr. Football.

“Reese (Smith) is right there with any of the best players we’ve had here at Boyle County and I think he is a definite Mr. Football,” said Smith, a former University of Kentucky assistant coach. “He is just special. He has the kind of athleticism that only comes around once every 10 years or so. He has unbelievable ball skills, speed, explosion and physicality.”

Voting for Mr. Football by state media members will occur in late November or after the season ends in early December. Other top candidates include Lexington Catholic quarterback Beau Allen — a Kentucky commit — and tight end/linebacker Michael Mayer of Covington Catholic, a Notre Dame commit.

Smith has a lot of numbers to support his Mr. Football candidacy:

— He has tied the school record of 23 interceptions held by Jacob Tamme, a former UK All-SEC tight end and nine-year NFL veteran.

— His 93-yard scoring reception is the longest in school history and his 20 receiving touchdowns and 62 total touchdowns are both school records.

“If we threw him the ball as much as we wanted, his stats would be even more unbelievable,” Chuck Smith said. “We choose to have a complete team and spread the ball around. There have not been many people we have played that can cover him. He runs great routes, has great explosion. He’s just a special athlete.” 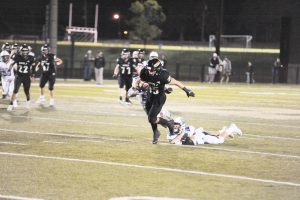 In a matchup against another Mr. Football candidate, Beau Allen, Smith had 275 receiving yards and 3 TDs, plus a 38-yard rushing TD in the 64-28 rout of Lexington Catholic. (Photo Derek Brightwell)

Reese Smith, a West Virginia commit, gets open and quarterback Reed Lanter gets him the ball. Lanter has thrown for 7,476 yards at Boyle by completing 481 of 716 passes for 87 touchdowns. Lanter not only knows how to find Smith, but how to look for other receivers when teams double cover him.

“If we wanted to, we could throw him more balls and he would find a way to get open and catch them,” Chuck Smith said. “We could make him a one-man team but we do not do that. He would not want that. His goal is to win a state title, not have a bunch of stats. He’s fine when Reed spreads the ball around and that makes us a better team.”

The Boyle coach believes his star senior could play defense in college because he is a “physical ballhawk” in the secondary and contributes as much to Boyle (8-0) on defense as offense.

“When it comes to Mr. Football, I think it should be the best player and what he has done for his team and what level of competition he has done it again,” the Boyle coach said. “Reese has already won one state championship, been to the semifinals and this year his team is a contender for another state title.

“Reese just gets in a zone when he is playing against somebody he thinks will try to challenge him,” Chuck Smith said. “That’s when he takes his game to a whole new level. That’s what he lives for. That’s what makes him great. Other games, he actually gets kind of bored.

“He’s tough and loves playing both ways. We pull him out of a lot of games early and I know he doesn’t want to come out. We could put him back there to return kicks and punts and he would blow those records up, too. But we don’t do that because we try to have a balanced team.

“I just hope doing that and not padding his statistics doesn’t cost him being Mr. Football. He’s just one of those special players that you are lucky to get to coach and personally, I just don’t see how anybody else can be Mr. Football other than him.”