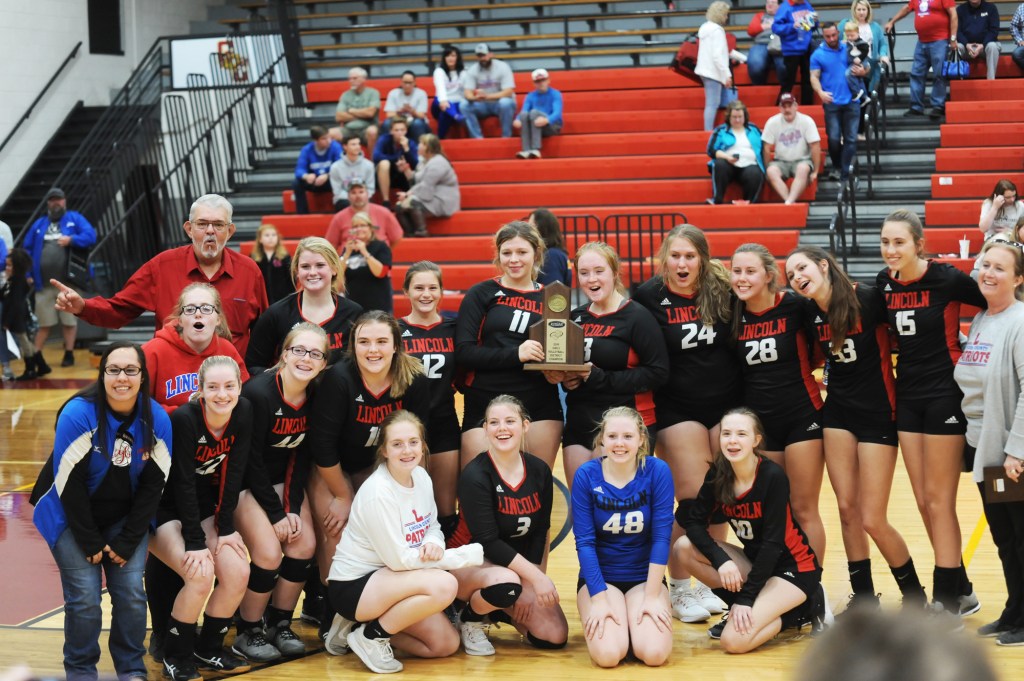 They knew going in that it wouldn’t be easy. Both of the matches between Danville and Lincoln County had been battles this year. But in the end, the Patriots hoisted their second consecutive district championship with a 3-1 win over the Lady Ads.

“We knew that going in,” Lincoln coach Sam Torres said about the match. “We had split with Danville earlier in the season. They had been long matches and long volleys within those matches. So we knew going in was going to be tough.”

The tone was established in the first set. The Patriots went up two points early, but a four point Danville rally swung momentum back in their favor, as they took a 7-4 lead and maintained that cushion for several services.

It wouldn’t be until 15-14 that the Patriots would regain the lead and the two teams would trade it back and forth for the remainder of the set. Just like the previous matches this season, this one was comprised of long and hard fought points throughout. 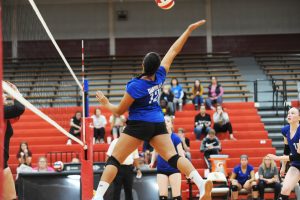 Destiny Byrd soars for a spike during the first set. (Photo Derek Brightwell)

The first set couldn’t be decided at 25 points, and after breaking a 25-25 tie to get the serve back, the Patriots closed it out to claim the first 27-25.

The Lady Ads came out firing in the second set and built a five point lead early. While Lincoln was able to fight back to tie it at 16, they couldn’t overcome the hole that they had dug and Danville took the set 25-19.

“I’m really proud of the way we played tonight. When we were in system, we executed very well,” Danville coach Margaret Myers said. “Everybody hustled. Everybody worked so hard. Everybody communicated. There are so many things that this team did well.”

Lincoln County never trailed by more than two points in the third set, and managed to jump out to a big lead thanks to rallies of six points, four points and a three point rally to close out the set with a 25-16 win.

“The match was good. We repeated exactly what we did last night where we won the first set, lost the second and came back and won the next two,” Torres said. “It was definitely a mental game. We lost momentum in the second set and came back and picked it right back up.”

Danville jumped out fast in the fourth set. Taking a 7-2 lead before Lincoln took its first timeout. Just like all match, the Patriots regained the serve after the team huddle.

“Mostly that it’s a mental game and they have to keep their heads strong and stay confident,” Torres said that she told her team during the breaks. “Remind them that they’ve come back from bigger — this is our typical. We like to dig holes and fight out of them. So they just need to stay calm. We tend to get upset and then we lose a few points. It’s all mental.”

Just like all year, the Patriots were able to slowly chip away at the Danville lead to pull themselves back into the set. 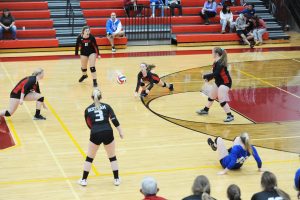 “I feel like that’s the story of this year. We build a deficit and then crawl back out of it,” Torres said. “It really goes to show how strong of fighters they are and how passionate they are and how much they want to win.

“They do (like to challenge themselves) and they like to give me a heart attack over on the bench,” she added with a laugh.

One of the keys for Lincoln’s victory Wednesday night was the ability to keep Danville off balance. Coach Myers said that it something that they had practiced, but were unable to manage during the match.

“After the first set, we did not have a lot of hitting errors. What hurt us consistently through all four sets was plays in chaos,” she said. “Not even necessarily just being out of system, but when we lost our tempo. This team plays really strong when they can maintain a rhythm. And we couldn’t do that tonight. Lincoln did an excellent job of sending second balls often enough that we couldn’t manage the chaos on our side of the floor.

“We worked really hard on finding the holes,” Torres said about her offense. “That’s what my bench does — they’ll alert them that ‘this is open or that’s open’ — so we don’t have to work as hard.” 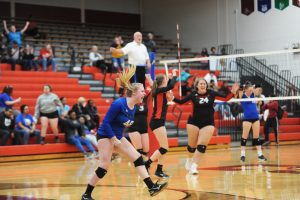 After regaining the lead, the Patriots were able to close the door and win the final set 25-17.

Kaylie Cotter, Peyton Griffin and Sarah Beth Grimes from Lincoln County and Olga Betonni and Keeley McKnight from Danville made the All-Tournament team. They were joined by Regan Ridge from Danville Christian Academy, Molly Wise from Boyle County and Kennedy Bruner from Garrard County.

For Lincoln County, it’s the second straight title and fourth straight trip to the regional tournament. For Danville, it’s their first trip out of the district since 2013 and that’s something Myers isn’t letting her team forget.

“We knew after last night’s win that we had a regional berth. It’s the first one for Danville volleyball since 2013. That in and of itself is something that we’re proud of and something this team could hold onto,” she said. “A district championship would’ve been the icing on that cake. When we were in practice last week, we know that this wasn’t our mountaintop. This wasn’t our ultimate peak.

“Our season has been filled with victories and not just in matches. In the way that we manage the culture and chemistry in our team — that is a win for us,” she added. “The teams that we competed against throughout the season. Some victories are defined by teams we took sets from that when I look back, hadn’t happened at all or in a really long time for Danville volleyball. We’ve been defining this season all year long by those moments. This was just a moment for us. We were fighting for a championship. We wanted a championship. It’s hard to leave the gym without a championship. But this match will not define our season.”