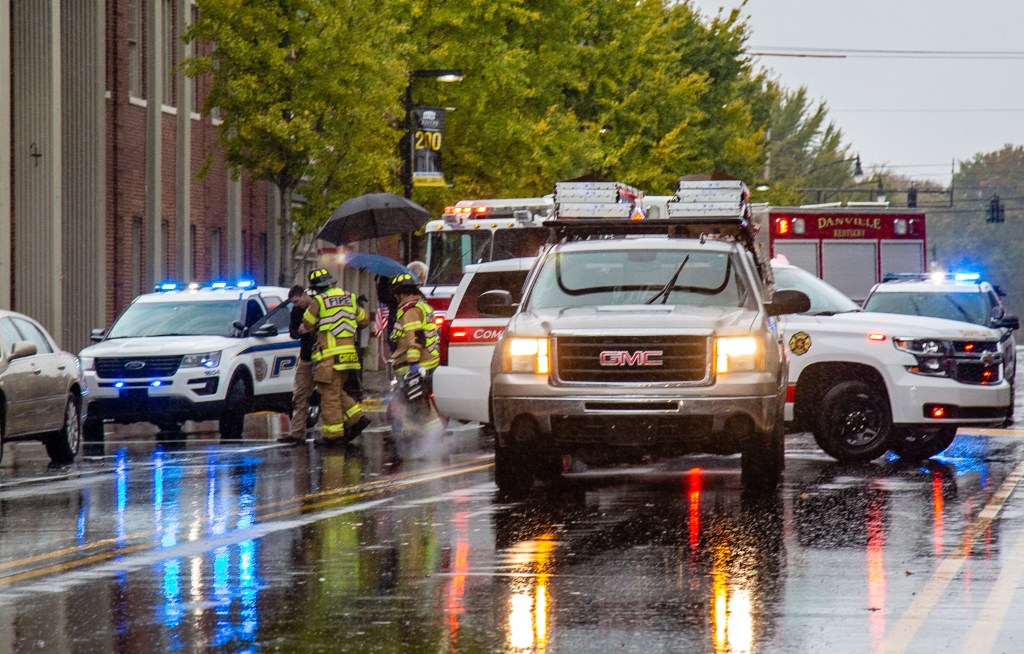 First responders help a pedestrian who was hit by a vehicle at Third and Main streets in Danville out of the roadway Thursday, Nov. 7. (Photo by Ben Kleppinger)

As the chief of police said, emotions are running high with many Danville residents about the intersection of Third and Main, and it’s understandable; a woman died as a result of injuries sustained from being hit by a car in the crosswalk. There have been two incidents recently where vehicles turning from Third onto Main have struck pedestrians; there have been others in the past.

Citizens took to the podium Tuesday night to share their grief, frustration and ideas with the city commission over the events. Some took elected officials to task for not standing up to the Kentucky Department of Highways District 7, the Lexington office which maintains and controls the two state roads.

And after hearing out citizens, Mayor Mike Perros had some choice words for District 7, although other city staff say it’s time to take a breath, step back and review the issue methodically.

“I’m really frustrated by the whole situation. Clearly we have to do something. Only people I know that the state responds to is the public — they don’t respond too much to me or the judge(-executive),” Perros said.

He said he will advocate that “we have a public meeting” with District 7. “Those people need to hear what we heard tonight, 20 times. They need to understand how wrong this is.”

Perros also said maybe a group of officials should take a trip to District 7’s Lexington office with other city staff for “a debriefing” on the issue.

The state controls the lighting signals for traffic and pedestrians at the intersection. Tuesday, City Engineer John Cassel told the commission that Police Chief Tony Gray and others have been in regular communication with District 7’s lead engineer about potential solutions.

A local citizen told the commission she walked down the area recently and counted 20 different street lamps that were out. Municipal Utility Engineer Earl Coffey said the streetlights on Main belong to and are maintained by the city. He said they are generally reviewed by different contractors twice a year.

Coffey said those lights going out are a “regular, ongoing maintenance thing,” and that the lighting situation downtown is not sufficient; even when they’re lit, they’re not bright enough.

“When you look at the standard we have in front of city hall now, with the new streetscape, you’ll notice a significant step-down once you go east of Fourth Street,” Coffey said. He said the overall system is very weak; it was put in somewhere around the 1980s.

“You lose current, it trips, it burns bulbs,” he said. “… Quite frankly, until we get the streetscape change, any given week, you will have lights that are out.”

He said even the new lights are sometimes out of sync and on during the day instead of night. Coffey pointed out that “pedestrian injuries at that intersection, at Third, do not occur at night.” He said perhaps lighting could’ve been a contributing factor to the recent fatal accident, but that’s not been determined; the latest injury incident happened during broad daylight.

Chief Gray has described the fatal incident as a perfect storm, with rainy, dark weather on a busy night in downtown Danville, as well as several groups trying to make it through the crosswalk at the same time.

“It is a conflict geometrically with the intersection in some format, and it’s a matter of trying to figure out and discover what that is,” Coffey said. “I know the state has been working on that; I know they continue to work on that.”

Coffey said some of the things the city knows it can do are “add the bump-outs (curb extensions) to that intersection, decreasing the pedestrian travel time … “ He said due to the lane reduction redesign, the geometry of the intersection has changed; vehicles are not in the same location that they were before when it was four lanes.

“So what we need to make sure is that the computer system acknowledges the travel time of the pedestrian clearing cars is a little different now … So when they talk about the all-red phase of the signal, did that change sufficiently? So all those decisions, the state is revisiting all of those, as well as some new traffic counts,” Coffey said. “They’re evaluating it now and trying to discover what is the issue.”

Coffey reiterated what Gray had said in a past interview, about how the intersection requires more attention from motorists.

“On the west side, the pedestrians are screened by vehicles. It’s hard to pick up with your eye, when you’re turning left. It’s going to be a difficult thing for the state to resolve.”

Coffey said they may be revisiting enhanced crosswalks with the state. “It has been an ongoing conversation with them.”

Perros asked, “So one of the key components here is getting a streetscape approval for Second and Fourth?”

“We would strongly advocate for that,” Coffey said.

Perros said a streetscape would adjust lighting, sidewalks, bump-outs and more. “So that one action cures at least five or more things that have been troublesome for this community for several decades. And that is going to be a political issue … because it’s going to require money out of Frankfort.”

Coffey said there can be time added to the 7-second all-red phase, which gives pedestrians a headstart out into the crosswalk as all traffic is behind red lights; District 7 is looking into that.

Chief Gray told the commission that’s it’s unfortunate, but accidents do happen. “The state can’t make every allowance for every problem we have at that intersection. It comes down to people being responsible, the drivers giving full attention. There are a lot of factors … where the buildings are up to the corners of the street, the way vehicles are designed nowadays that limit visibility. It’s all about awareness and visibility at that intersection. Unfortunately, that was a grave accident that happened, but there were a lot of factors in play.”

Gray said they will continue to look at the situation to try and make it better and safer. “It’s always a process of continuing to improve, and evaluate it. Unfortunately again, we had this accident, emotions are high right now. But we really need to take calm, methodical steps and try to make things right.”