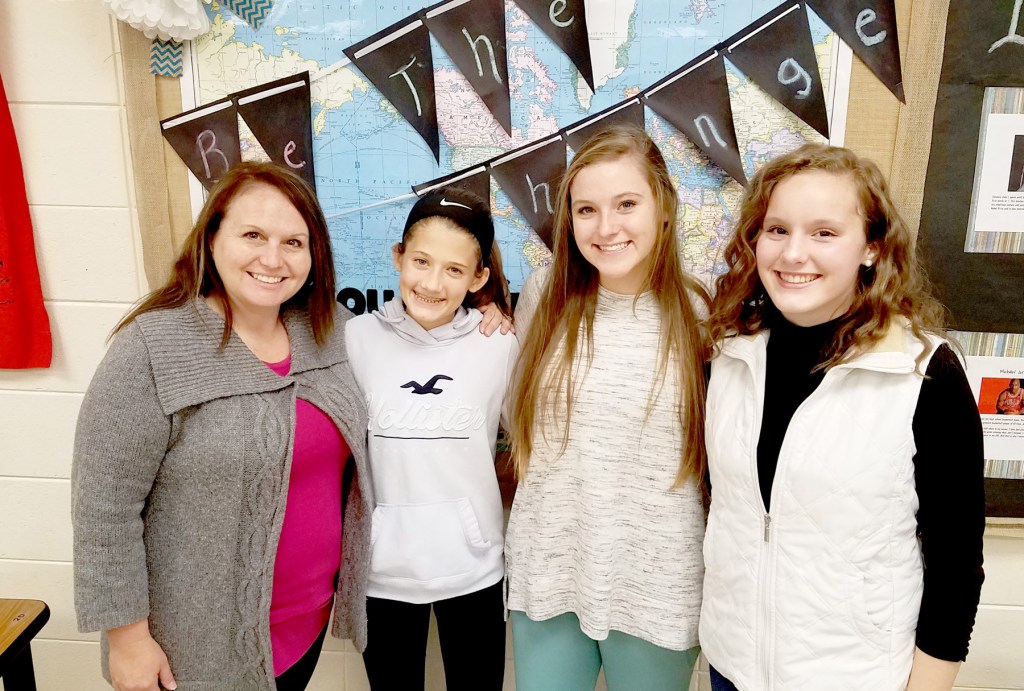 From left, teacher Amanda Underwood, Addisyn Woodard, Kennedy Aulick and Brooklyn Rockhold pose for a photo in front of a banner reading, "Be the change" in Underwood's classroom at Boyle County Middle School. (Photo by Ben Kleppinger)

Child abuse is more common in Kentucky than anywhere else in the nation.

That’s a fact based on 2017 data from the U.S. Department of Health and Human Services, which shows for every 1,000 kids in the Bluegrass State, there were 22.2 kids who were victims of abuse. The next-closest state was Indiana with 18.6 victims; the national rate is 9.1 victims per 1,000 kids.

Many people will shake their heads at that statistic and say, “Something needs to be done.” A group of Boyle County students and their teacher have decided they really are going to do something about it — they plan to get legislation passed through the Kentucky legislature.

“You can’t fix a problem without people knowing there is a problem,” said Brooklyn Rockhold, one of the Boyle County Middle School students pushing for legislative change.

The students — Rockhold, Kennedy Aulick and Addisyn Woodard — and their teacher, Amanda Underwood, want Kentucky legislators to pass a law requiring schools to teach students how to spot the signs of child abuse and report if they think a child might be getting abused.

They developed the idea for the law as a project in Y Club, a service-oriented group led by Underwood. They decided to find a worthy cause, then come up with a plan to make things better. Through research, they discovered that Kentucky has regularly had one of the worst rates of child abuse in the nation, and the most recent data puts the state at No. 1 for child abuse and neglect.

They said they worked with their state senator, Rick Girdler (R-Somerset), who agreed to sponsor a bill they came up with during the last General Assembly. And they wound up working with Jenna Quinn, a child abuse survivor whose name has graced laws similar to the one the students are proposing in more than half of U.S. states.

But then, something still unexplained happened: Underwood said the bill was moving forward and the students expected it to pass. Quinn had actually purchased plane tickets to fly in so she could be present when the legislature passed the bill.

Then, “they called her and said, ‘We’re not going to hear it.’ So they canceled on her,” Underwood said.

“I was crushed,” Rockhold said. She said the sudden change made her feel like “this was never going to happen.”

It was not the end of the story, however — the students, Underwood and Quinn are all back to push for the legislation again in 2020.

“I’m not going anywhere until it’s passed,” Underwood said. “Something has to change. It has affected far too many people, too many children.”

On Sept. 11, the students and Underwood traveled to Frankfort to testify in favor of their bill in front of the Interim Joint Committee on Education.

This time around, their bill is being sponsored by Sen. Ralph Alvarado (R-Winchester) and Sen. Alice Forgy Kerr (D-Lexington), Underwood said. Sen. Girdler is also still backing the bill and introduced the students to the committee members.

Woodard told legislators the story of a girl named Allison, who was abused when she was very young. It took the girl 10 years to tell anyone what had happened, Woodard testified.

“We hear these stories all the time. Often, the victims are strangers but their stories make us wish we could have done something for them,” Woodard said. “… We are currently moving in the wrong direction with this epidemic. This isn’t what we want our great commonwealth to be known for.”

Aulick told the story of a boy named Alex who suffered “a life of abuse at the hands of his father.”

“His father should have protected him, defended him and encouraged him,” she said. “Yet he was the one that Alex feared the most. Alex was cheated of a father figure, a safe home and a childhood. His father never received any consequences for his actions because no one ever suspected the abuse. Alex will forever have mental scars and trust issues as a result.

“Some of the stories we hear are about strangers, but not this one. You see, Alex is a friend of mine.”

Aulick said if somebody could have noticed the signs in Alex that he was being abused, it could have led to the abuse ending much sooner.

“We are optimistic about the potential impact of this legislation,” she said. “… While it won’t stop every case, it will stop many.”

Rockhold testified about abuse from her personal experience. She said her mother was a victim of domestic violence for years, and she and her sibling suffered as well. But like many other young children in similar situations, she didn’t know it was abuse at the time.

“As I’ve gotten older and become more aware of what child abuse is, I’ve realized the things he did to my brother and I were abusive,” she said. “If the schools had this legislation back then, I would not have grown up thinking this kind of thing was normal.

“… Kentucky children deserve to know that they are not alone and child abuse is not acceptable in any circumstance.”

Underwood also testified from a teacher’s perspective, about a child she had in class who often appeared anxious and seemed confrontational.

“I was a second-year teacher at the time and I was thoroughly trained in how to (provide for) her special education needs. I was not, however, at that time, trained in how to recognize the signs that were right in front of me every day,” she said. “… I was sending her home to a grandfather who on a regular basis was forcing himself on her.”

Now, teachers are educated on spotting the signs of abuse. But students are not. Teaching students about the signs would help them report potential abuse and empower victims, Underwood testified.

“We have already waited too long. If we continue our recent trend, our great commonwealth will exceed 35,000 cases of child abuse and neglect this year. We can no longer sit back and wait at the expense of our children,” she said. “… The only question now is, ‘When do we get started and why have we waited so long?’ What could possibly be more important that the safety of our students?”

The group’s testimony affected many of the legislators in attendance.

“We hear a lot of powerful testimony in all of the various committees we have and this is one of the most powerful ones we’ve ever had in the Education Committee,” said Sen. Max Wise (R-Campbellsville), the committee chair. “… I admire each one of you all for being here today and presenting.”

Sen. Kerr said she has twice tried to bring similar legislation but was never able to move it forward.

“One time I brought it and I was only allowed to have testimony only in the committee. Another time I brought it and it didn’t get anywhere,” Kerr said. “I went before my leadership in closed meeting and explained what I wanted to do and basically, they said, ‘Gross.’ These men were offended that this should be brought up.”

Rep. Lisa Willner (D-Louisville” said she agrees it is “long past time that we take this issue seriously and address it.”

“I look forward to voting for this legislation when it’s brought to us next legislative session,” Willner said.

Optimistic about the future

Rockhold admitted it was intimidating heading to Frankfort and testifying before so many state representatives and senators.

“There were all these scary adults looking at us, and we were like, ‘Hi!'” she said.

“My heart was pounding,” Woodard said. “But it turned out real good.”

Underwood and the students said they were pleased by how legislators on the Education Committee reacted.

Rockhold noted that “the men on the committee we testified for seemed like they were supportive.”

Underwood said she thinks some of the resistance in the past may have been because child abuse is “an uncomfortable subject.”

“I think it’s an overwhelming problem and that makes it intimidating,” she said. “It’s uncomfortable to talk about hurting kids.”

Rockhold said talking about it is necessary — many people simply don’t realize how often kids are abused in Kentucky and the terrible effects abuse can have.

“We didn’t even realize how bad it was until we researched (the problem),” Woodard said.

The students said researching the problem, coming up with legislation, meeting with legislators — it’s definitely all a lot to do alongside school, family, extracurriculars …

They are all optimistic the bill will pass into law, hopefully this coming session.

Underwood said if the bill does pass, it will probably be the Kentucky Department of Education’s job to draft actual rules for implementation in schools throughout the state.

Beyond this bill, Underwood said there’s work to be done in other areas, such as consequences for those who abuse children and increased funding for child protection.

“There’s so much we need to do. This is just a starting point,” she said. “… It’s ridiculous that Kentucky has gotten to this point. We have a great state — we do. I cannot imagine living any place else in the world except Kentucky. But something like this is a major blemish. If nothing else, we have to protect our children. If we fail at that, then we’ve failed at everything. Nothing else matters if we can’t protect them when they go home.”